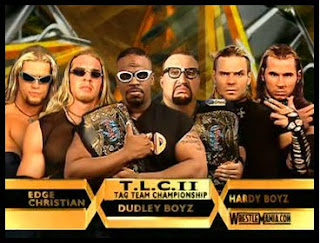 When I was younger the Hardy Boyz were my heroes. In hindsight, possible not the best of role models, but I’m teetotal and have never smoked/taken drugs in my life - so I worked out alright in the end. When my younger sister and I watched them, they made us want to be wrestlers. We wanted to grow up to be the WWF Tag Team champions. I loved Jeff and still do, she loved Lita and God knows I still do. I spoke to her about this a while ago and she was quite embarrassed about it. What was really embarrassing for me though was when she asked me who the best tag teams around were now…

The Hardys, The Dudleys and Edge & Christian, 3 tag teams I idolised growing up. Well, truth be told, I was never a huge Edge and Christian fan but I am now. These 3 amazing tag teams fought in a TLC match at SummerSlam 2000 that rewrote history. This was one of my favourite matches of all time.

This match was designed specifically for these teams and their signature weapons. The Dudleys had their tables, The Hardys had their ladders and Edge and Christian had their chairs. If you have seen this match, then stop reading this article right now - go on YouTube and watch it. Right now. Back? Amazing, right?

The match was repeated less than a year later at Wrestlemania 17. This was probably down to the huge success of the first one. You should also watch this match if you can.

However, on October 2002 on a RAW Roulette they had a very different TLC.
Kane vs. Bubba & Spike Dudley vs. Christian & Y2J vs. Jeff Hardy & RVD
So 3 marvellous tag teams who participated in one of the greatest matches of all time were no longer together? Why? Well, I have my suspicions.

Like most things, I reckon it’s something to do with money. I can only assume that the big leagues pay singles competitors more than tag teams. This must be even more so for their champions. I also reckon pride has a great deal to do with it. I mean why be Tag Team Champion when you can be World Heavyweight Champion, right? And nobody wants to be remembered as the Marty Jannetty of a tag team.

When Shawn put Marty through the barbershop window he started a dangerous precedent. Now whenever a doubles competitor looks like he might be getting good enough for a main event push, he screws over his partner. We saw it most recently with Bobby Roode and possibly in the near future with Dolph Ziggler. Try as they might, they will never recreate the shock and wonder of The Rockers breaking up. In almost every tag team that has split up, one has gone on to much greater heights whilst the other has languished on the lower card, possibly having to find another partner because they weren’t seen as an able singles competitor.

When I think of the great tag teams we had to look back at it’s easy to dismiss today’s teams as junk.

Apart from the Hardys, Dudleys and Edge & Christian we also had DX, New Age Outlaws, Rock & Sock Connection, The Steiners, The Eliminators, The FBI, The Road Warriors, Demolition, Blanchard & Anderson, The Midnight Express, The Rock & Roll Express, The British Bulldogs and of course The Rockers. That’s some pretty tough competition for R-Truth and Kofi Kingston (2 guys who will never main event WrestleMania as singles competitors) but they are doing their best.

As my good friend Jamie Morrison put it, “I personally think that R-Truth and Kofi could revive it if they were given the chance! We just need more watchable dedicated tag-teams”.

Perfect point! So where’s the competition? Ziggler & Swagger (ZigSwag as I call them) look to be on the verge of a breakup, Epico and Primo are average, The Usos are talented and O’Neil/Young are starting to get a push. So we could have 5 tag teams soon? That’s a great start. As for TNA, they have split up their best (and possibly the world’s best) tag team in Beer Money. Samoa Joe and Magnus seem to be a great combo and got over with the crowd rather quickly but will they always be seen as 2 guys who couldn’t make it by themselves?

Maybe nobody wants to see tag team wrestling? Am I the only one who loves it? Lemme know in the comments or on Facebook/Twitter @MrRabtastic.
Posted by WrestleFigsUK at 08:41