From The Prototype To The Chain Gang Soldier To PG... WHY WE LOVE HATING JOHN CENA by Mandy Hiser 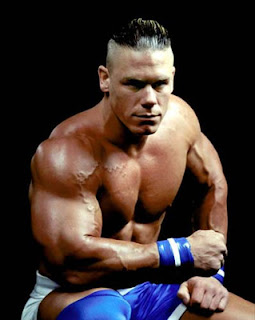 Here we have Cena in his days as The Prototype

Whether you love him or hate him, you have to respect him. You can't deny that the man has worked his way from the bottom up. JC has some of the best mic skills. And we recently have gotten to see them return. (Thanks Rocky) But regardless of what he has done for the WWE in the past- WHAT can THEY do for him now?

This "Super Cena" that we love to hate, has got to change. What are some prospective hopeful storylines to expect? Most people want him to become a bad guy or heel. Much like Hogan did in the past. Change is a good thing and he most defiantly needs it. So- love or hate the situation- a change needs to happen! Do we want him to turn heel? Justin Summers ‏ (@HeavyseT330) doesn't feel like that would make a difference. - " #HeelCena solves nothing. He needs to be the face that all the Heels get over on. Hogan got stale because he didn't put anyone over. Hogan is and has always been all about himself. The nWo even got stale because it started to become the same old shit week after week. Cena needs to spend less time in the main event and title picture and put some over. Most faces get over on their own -Cena helped Punk fulfill the level of what everyone knew Punk was. He needs to do the same for Dolph, Cody and ADR and if he does win the title he needs to drop it to some of the talent I just named. “Justin has a valid point. We need a solid big name to give up coming talent a push. It’s not fair to hard working "mid cards" that should be main eventing- if not now- the near future-, to be a JOBBER to push over an entrance. The WWE has some great talent. And you forget about them because they get pushed and taken back, because of this "super Cena" and someone returning "for good" or for a fun energetic entrance..... I understand that the WWE has its own way of upbringing new talent. But as a fan, it’s hard to fall in love with a great superstar, see him win, get this small push and then get taken back to jobber status the next week. Great example? DOLPH ZIGGLER! I’ll go on the edge and assume, that being the ultimate fan himself, John Cena is even questioning. We saw him with Zack Ryder for a while, which was FANTASTIC! He was there for the kind of lame storyline, but ultimately pushed Ryder at the time. 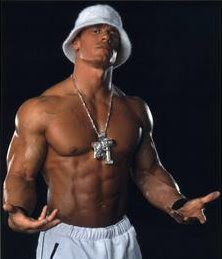 Here we have Cena when he first embarked as a rapper

Back when Cena was the Prototype, or our beloved chain gang soldier, our “white boy rapper” he was never truly heel. He was never telling the fans to piss off. (Maybe here and there, but not on a regular like early Rocky, or Hollywood Hulk. If anything, when he made a low blow for the entertainment value, he has generally apologized for what he said. He’s a real person. And I know as an avid WWE lover, I appreciate that. He has wit, and charisma, looks, attitude, but he’s still your nice guy next door. (If you’re not familiar with his Make a Wish work, Google it.) However....

Do we really want Cena to stay face? To stay in this “pg” mode? If he does stay face, we defiantly need him to start from scratch with his character. A complete Revamp of John Cena. As the ECW Faithful would put it in a 3 syllable chant- "Same Old Shit". Yet- fans are still very loyal to him. Magdalena Katsourdis ‏ (@MaggieBooh) says "I thought I hated the guy but you really can't lol ... #CeNation is alright but a nice change would do some good like a heel turn but I know WWE won't do it” There are also people like Brett D'Angelis (@BadBobaBrett) who said “I guess I am pro-Cena, he serves a good purpose, is a good guy who loves the biz, still should go heel though." Again- it’s hard to argue with that statement. Cena is a great guy. A wholehearted American. He truly loves the business. He has bled PINTS of blood, sweat gallons in the squared circle and fallen to the famous. He has stood tall and proud as the champ many times, he’s been injured and had surgeries. One thing he hasn’t done is leave. His whole heart is in. I truly believe it.

No matter what the man does, he will ALWAYS have people who truly hate him. Not people who love to hate him, like a lot of fans. Hell, I am a big fan of the guy and I love busting his balls! I know I’m not alone with saying that I’m sick of his stupid move set and you can’t see me- and hustle loyalty respect. This is washed up. Just like Hulkamania. It is something that you have to respect in the business, but just don’t want to see any more! I do like the rise above hate change. But it was gone so fast! I, like most fans, I miss the days of the chain gang soldier. Cena was funny and purely entertaining. He was not afraid to push the limit with his “raps”. He was not just a literal Face of the WWE. The super Cena we now know makes people feel like this -Damo Williams ‏ (@Damo200) “I despise him with every fiber of my being! Wish Lesnar had torn his head off!” (In reference to the recent WWE PPV Extreme Rules that I was LIVE at) HEY- I’ve seen people say way worse things about him – like wishing death upon him. -_- (I’m not going there) 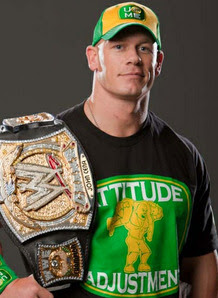 And here we have Cena as you all love/hate him

Throughout the years, all the hatred that the man has endowed, he always is positive. “I was enjoying every single moment that they were enjoying” in reference to ECW ONE NIGHT STAND when he wrestled RVD (Rod van Dam) for the infamous WWE Spinner Championship Belt. The crowd was chanting vulgarities the entire 3 hours the event went on. Things from “FUCK YOU CENA” to “CENA SUCKS” and “You can’t wrestle”. There was not one fan in the arena that night that was chanting pro Cena. I’d think that they would of gotten beat down! If you’ve ever watched any ECW match, you know those fans are intense! The match I’m talking about is on a few different WWE DVDS- It’s worth the watch. Any who!

The days of there being “ten percenters” are gone. And the IWC (internet wrestling community) is taking over. More and more people all over the world are logging on to WWE.com everyday! With the technology and money that WWE has, they have no problem utilizing Twitter, Facebook, YouTube and social media. They know what people want, or at least have access to seeing it. Sure, not every IWC fan is a smark, or even mark, but they ALL can go to WWE.com and vote or hashtag for them-they can like something on Facebook or retweet something on Twitter. We “ten percenters” are still strong. We the adult market that spends the money, travels to shows, support younger talent, and truly loves the WWE. (Me for instance)- But for every ten percenter, I’m going to guess that there are at least 5 IWC fans that are either under age, or not the strongest fan. Kayfabers. What the WWE needs to KNOW that people want change. And we’re not talking about “people power” (that’s a blog for another day. ...) we want to see new faces. Yes, you have given us some great returning “big names” in the past couple of years, but we want young fresh talent to start to take over. As Mathew Zaller (@mizfitMathew) would say- “it’s a GREAT time to be a wrestling fan” And I couldn’t agree more. WWE as a whole is amazing! But when our main events over and over are super Cena and his moves of doom night after night. It gets old. Changing his shirt or colors doesn’t exactly revamp him when they are literally all the same anyway. In my opinion, I want a heel Cena. I want him to blow up. Go crazy. Almost r-truth crazy for a while. WE JUST WANT SOMETHING DIFFERENT!!! It’s been said over and over; let’s hope that we get to see it soon.

Hope you enjoyed reading, please leave any comments below and you can hit me up on twitter @HEELchampMANDY
Posted by WrestleFigsUK at 00:47