Shane Douglas Interview with Inside the Ropes 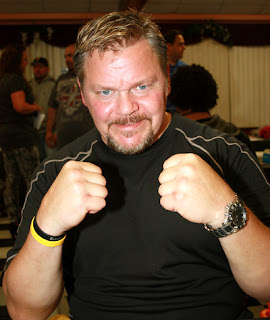 Just before Extreme Reunion Shane Douglas spoke with the Inside The Ropes show. He talked about Sabu having problems, his view on TNA and how Flair almost signed with ECW in 1998. Here's the highlights:

On wiping the mat with the WWF in the 90’s

-If we’d had a backer like Panda Energy or Ted Turner, I think….no I know we’d have wiped the mat with the WWF. Paul Heyman was that talented a booker and our dressing room was that talented. Vince McMahon ripped everything off from us. He’ll tell you he didn’t but it’s as blatant as the nose on my face.

- I remember in 1993, sitting in the back watching him, I’d never met him. He hit a triple moonsault, I jumped out of my seat as a fan, I’ve always been a huge mark for Sabu. I spent this past weekend with Sabu and he’s been going through a tough time recently with his family and his wife and things. I’ve heard all sorts of horror stories about Sabu that he turns up at shows not able to perform.

On How TNA Books their locker room

- I look at Dixie’s dressing room and you have Samoa Joe, Bobby Roode, AJ Styles, Christopher Daniels, they had Petey Williams. I’m a mark for those guys. That said, I’m anything but a mark…. I’m a critic for the way that talent has been used. I hope that in a year from now, I’ll be able to say I’m booking for the Bobby Roodes, AJ Styles and Samoa Joes as opposed to having to sit back and watch them being mis-used by a company that just doesn’t get it.

Difference between the old ECW and Dixie Carter’s TNA

- Without going into my whole TNA rant, she’s over $150 million in the red, has nothing to show for it. Hasn’t produced one bankable star in 7 years. The original ECW on the other hand launched in 1993, spent $8.27 million dollars, and in 7 years how many bankable stars did ECW, Paul Heyman create? Dixie was onto a decent idea and then instead of going with what could have given her Dad some return on his money, she went with the whole Hulk Hogan/Ric Flair routine. My personal differences aside with those guys, the fact that in 2012, we’re still talking about the guys that headlined wrestling in 1984, is laughable at best, sad at worst.

- Well to say it’s not true would be ignorant. The fact I’ve carved out a niche in the business and had an almost 30 year career and done well without competing at a WrestleMania is something I’m proud of. To be in a business that’s dominated by one guy and be able to do well without having to walk on that stage is great.

- The way it was pitched to me isn’t the way it played out. It took 7 or 8 trips up there for me to sign. There was something in the back of my gut that told me it wasn’t the right fit. I no desire to leave ECW but in 95, I was reaching my mid 30’s I’d been the World Champ multiple times…I’d pretty much done everything in ECW, all I could do is repeat. That was one of the reasons I didn’t wanna miss an opportunity to make a living for my family. The last time I went there, I took my ex-wife with me, and I was working as a teacher 5 days making good money and making pretty good money the two nights a week working for ECW, she looked McMahon in the eye and said “What could you possibly offer my husband to make him leave all that and being home in bed with me every night?” and he leaned across the table and he stroked her hand and said “You have my word as a gentleman that I’ll make your husband a very wealthy man” He went on to tell me “its not uncommon for someone in the position we’re putting you in to earn $300,000 a year minimum base salary” I spoke to Piper, Hennig etc and they said Vince told them the same thing and they got rich. I called home one night and my wife said the cheques hadn’t been great and she said they all came to $1400 and I told her to add them up and she said that was them all added up.

On being comfortable with his feud with Flair being put on TV in 2000 in WCW?

- Hell Yeah. If a company is investing a seven figure income to me, which Bischoff did for me for three years, but I’ll go into any situation in the ring. I’m a professional.

Flair negotiating with ECW in 1998

- Flair had started discussions with ECW when he had his problems with Bischoff, about working with me. His concern to Paul Heyman was, that I would shoot on him. He wanted $150,000 for one match which we couldn’t possibly afford that. So I suggested to Paul, offer back to him, 3 shows, first one in Charlotte. I put him over, 55 minutes. Second, Pittsburgh he puts me over, same time frame. Third time in Philadelphia, I have no doubts that promoted well, we could’ve sold the Spectrum out.

Triple H – An over achiever. He doesn’t seem to have the skillset to get to the position he’s at. But in saying that he’s a good ring general and I think he’s the one guy in the locker room that could’ve worked in the original ECW.

Bret Hart – He’s one of those guys, he’s the universe’s Ric Flair. When I met Flair, he fell far short of a hero or someone to look up to. When I met Bret, I was shocked at what a down to earth guy he was and just worked his tail to get to where he was.

Dixie Carter – Way out of her league.

Hulk Hogan – He’s the phenomenon that he’s believed to be. I do believe Hogan is as big an icon in our business. He always made sure he left time for the kids at Make a Wish Foundation.

Check Inside The Ropes out here - http://facebook.com/theinsidenetwork and the shows/interviews the guys have done can be found here - http://insidetheropes.podbean.com/
Posted by WrestleFigsUK at 15:52