Work or Shoot – Spud vs Marty Scurll By Darren Rogers 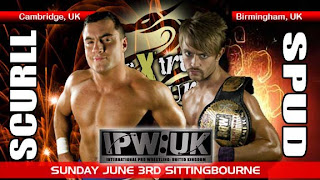 (Disclaimer : The following article is my opinion and not necessarily fact)

I shouldn’t need to explain what a ‘shoot’ is in wrestling terms. The very fact that you visit this excellent website means that you, the intelligent wrestling fan, know what I’m referring too. A quick hunt on the internet will show you the many shoots in wrestling, the most infamous being the ‘Montreal screw-job’ at Survivor Series ’97 where Vince McMahon called for the bell to stop Bret Hart leaving WWE with the world title.

Now, ‘shoots’ in their truest sense are few and far between. Pro wrestling is *spoiler alert * a worked form of entertainment. Therefore, the 2 combatants need to work together. One person legitimately hurting the other is not fair and it will not lead to a good match. So, for 99.999% of the time, what we see in interviews and in the ring is not genuine animosity.

However, Rockstar Spud wants us to believe that he genuinely hates Marty Scurll.
This allegedly stems from Spud’s appearance on BBC’s “Snog, Marry Avoid” which Marty then trumped with an appearance on ITV’s “Take me out” – which also featured Jimmy Havoc being called ‘Nick’ by host Paddy McGuiness – which alone was more memorable than Spuds ‘make-under’. Spud then took to the internet to berate Marty by Twitter and Facebook and Youtube to try to garner a response and elicit a feud with Marty. I also saw him try to attack Marty after a recent IPW show. Then he stole Marty’s cruiserweight belt or something, I can’t remember to be honest because all I can think of is Spud’s videos talking about ‘rats’!

I have to give Spud credit. He has used his Twitter and Youtube accounts to get himself a match\angle with arguably one of the most high profile UK wrestlers not currently employed by WWE or TNA, so fair play to him for that. He’s tried the same with Matt Morgan, who offered to throw him as ‘drawf throwing was still legal in the UK’ - and this has led to people tweeting Dixie Carter to get Spud on “TNA’s Gut Check”. Spud is using social media to drum up interest in a feud, from scratch, which is a great idea and more wrestlers should do it. Jimmy Havoc retweeted my #BookHavoc tweet to his followers and they have bombarded Progress Wrestling about booking him. This all started from one tweet and, despite not being successful yet, has just been mentioned in the latest Progress Wrestling Youtube video.

But is the hatred between Spud and Scurll real? In my opnion, no. Just like CM Punk referring to ‘breaking the 4th wall’, and Scott Steiners tweets about Eric Bischoff and Hulk Hogan recently, it’s all just an angle. As someone that has worked behind the scenes at FPW (hey, that pumpkin didn’t get on that pole by itself you know!) it is not good booking practice to put two guys together with genuine ‘heat’. It doesn’t sell any more tickets than a worked angle, so why even bother pretending.
I’ll be at IPW’s show this weekend cheering on Marty Scurll – I hope he kicks Spud’s arse then buys him a beer afterwards!

NB – I also think the ‘Montreal Screw-job’ was a work by the way...
Posted by WrestleFigsUK at 10:58