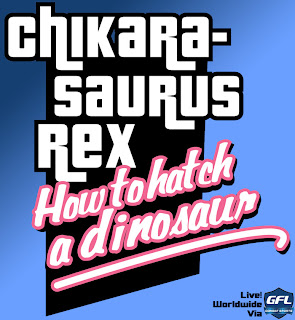 Last November, CHIKARA Pro Wrestling made its IPPV debut with "High Noon". The show was a huge success with both fans and wrestling insiders calling it an amazing show. But this past Saturday, CHIKARA returned to IPPV for "Chikarasaurus Rex: How to Hatch a Dinosaur" and this show may have surpassed "High Noon". Every match had great storyline build-up, every match got lots of time and the wrestling was top notched. Let's go though the card.

The first match was dubbed "The Battle of CHIKARA'S Most Devious" as UltraMantis Black took on Ophidan. Since turning heel at "High Noon" Ophidan has quickly become the next top heel in CHIKARA and this match showed why. Very good back and forth between the two Devious Ones while a nice story element in it as well. The finishing sequence really pushed this match to the next level for me. A very good opener. 3.25/5

Next up was the Loser Leave Town Tag Team match between the team of Colt Cabana and Mixed Martial Archie (dubbed Team Tapout Outback Steak House or Team Jew-Jutsu) taking on The Throwbacks ((Dasher Hatfield & "Mr. Touchdown" Mark Angelosetti). This was another good match with Archie trying to get his hands on Mr Touchdown the whole time. Archie was taken out of the match early after Touchdown gave him a big spinebuster on the stage leaving Colt to take on both Throwbacks on his own. However Colt didn't go down without a fight and manged to almost win a few times. The tide changed when Colt tried to superplex Dasher off the top and Touchdown ran in and knocked both men off the top to the outside. Just when it looked like it would end with a countout, a familiar music hit and Archibald Peck aka Marchie Archie returned!!! The crowd exploded with cheers as Archie took it to Touchdown and then went for his top rope finisher. Before he could hit it he was distracted by the face of his former valet Veronica who came out. Touchdown took advantage and almost won the match. After some more close calls, Touchdown was able to steal the win by hitting Archie with his football helmet behind the referee's back forcing Archie out of CHIKARA! As if that wasn't bad enough Veronica then kissed Touchdown in front of Archie causing further heartbreak for the leader of the band. I am hoping that Archie will somehow someway make his way back to CHIKARA because he is just way too entertaining to lose. Plus with this win, The Throwbacks now have 3 points and a shot at the Campeonatos de Parejas. 3/5

Next up we had CHIKARA's 2nd Ladder Match in its history. This ladder match featured Gran Akuma's career on the line plus his chance to get his hands on his former partner: Icarus. This match also featured Greg Irons as the guest referee. This match was great! This wasn't your average ladder match where all you see his spots. This match told a great story of these former partners finally facing off and trying to do everything they can to hurt each other and win the match. The spots were very nice as well and were impressive for a company not know for doing hardcore spots. A few of the highlights are Gran Akuma's frog splash from nearly 20 feet high and a powerbomb off a ladder though a table. During this match Greg Irons helped Akuma by chasing off the other members of F.I.S.T. thereby allowing Akuma to win the match and his career in CHIKARA back. 3.75/5

The following match was CHIKARA's first intergender handicap match with all three members of The Batiri taking on Sara Del Rey and Saturyne. I wasn't expecting much from this match but it managed to surprise me. The two teams worked well together and to their credit Sara and Saturyne took a good beating and were willing to take a lot of hits from The Batiri. Saturyne is really growing into a great wrestler. One highlight from this match was her springboard crossbody to the outside into The Batiri members. WOW! During this match Delirious came out and had words with The Batiri during the match and in the end ran into the match and took out both Sara and Saturyne causing a DQ win for them. He then kissed all three of The Batiri members on the head and lead them to the back. Looks like Delirious has some new followers in his corner. The match was good but the I wasn't a fan of the DQ finish BUT i am sure CHIKARA is using this to build to something bigger. 2.75/5

Following intermission we had a match that mainly were looking forward to the most. Hallowicked vs. Tim Donst in a Mask vs. Hair Match. This feud has been build since 2010 and this was the finally nail in this feud. The match was great! These two have some of the best chemistry in all of CHIKARA and I would love nothing more then to see these two have a main event match for the Grand Championship. Match told a great story while a lot of good near falls and spots. The false finishes were good too and many of them looked like they could have been it. In the end Donst used his shoelace to steal the win and choke out Hallowicked like he has been doing for almost 2 years now with his opponents. Hallowicked was going to be unmasked! But wait! Bryce the referee found the shoe lace! The match is to be restarted! With a quick kick to Donst's face, Hallowicked puts Donst in his own submission. AND HE TAPS! DONST LOSES! Goodbye hair. After a "nice" haircut by Hallowicked, Wicked shows some respect by handing Donst his Young Lions Cup which has been Donst's obsession since winning it. But Donst throws it away and spits on it! Maybe Donst is moving on to something new? Grand Champion anyone? Great match with a great end to the feud. I didn't mind the match restarting but I didn't like how ended seconds after it did. Could have gone another 2-4 minutes for me. Still great. 3.75/5

Next we had the 10 Men War with The GEKIDO taking on the Grand Champion, Eddie Kingston, Jigsaw and The Colony. However during the pre-show, The GEKIDO took out Fire Ant forcing him out of the match. So it was 4 on 5 to start with The GEKIDO getting the advantage early on. UNTIL! Mike Quackenbush returned! And went right after the man who injured him, 17. The match was fast paced with a lot of brawling on the outside and the two teams at each other's throat the whole time. At one point Green Ant climbed nearly 20 feet in the air on top of the 2nd floor of the venue and leaped off into everyone! GOOD GOD! What a spot! Following this we saw Soldier Ant climb on top of his four teammates and do a Super Saluting Headbutt to 17 followed by the CHIKARA Special for the win. WHAT A WAR! This storyline has been great and I really hope it keeps going. 3.75/5

Main Event Time! With the Campeonatos de Parejas F.I.S.T. (Johnny Gargano and Chuck Taylor) taking on The Young Bucks in what I would call a dream match for me. This match was AMAZING! The first two falls of the match were nicely done so that both teams had a lot left in their tanks and boy did they have a lot of gas in their tanks. These two teams gave this match everything they had and more. The last 5 minutes were insane with multiple false finishes which mad the crowd and myself pop big time. The ending came with the Bucks hitting More Bang For Your Bucks to win the third fall and the Campeonatos de Parejas! WOW! What a match! I was shocked the Bucks won but this could lead to a great storyline with the Bucks taking the belts hostage (as they are not CHIKARA regulars) and maybe leading to a face turn for Gargano and Taylor. Time will tell. Until then this is the CHIKARA match of the year. 4.25/5

This whole show from top to bottom was so much fun. And that is what CHIKARA is all about: fun! The storytelling of this show was amazing as well. With each match telling a great story. If you have never seen CHIKARA before this is the show to make you a fan. Buy it now on GFL.TV and enjoy!