This is PROGRESS - Stel Stylianou Gives His Thoughts on Chapter 2 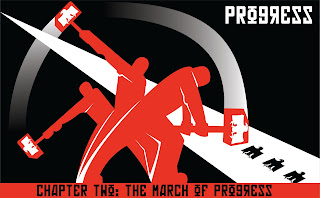 I’m not starting this blog by mentioning how non wrestling fans frown upon people like me and you, because we’ve already heard it all before.

In fact, it’s not even worth giving examples of the things that are said – because, well, we’ve already heard it all before.

However, one of the things I love about wrestling fans is that we’re proud to admit it. I’ve rocked into Pubs and Bars wearing my Colt of Personality T-Shirt and decided from now to wear my “Ask Him” T-Shirt when I go to my Cousin’s Birthday do in Camden, at the end of July.

At the beginning of March I was sent to Newcastle for work. Our company bought a branch up there and we had to make the trip up there to make sure their systems were up to date, and staff trained on the new system we were about to implement.

Those of you who work in IT (especially Systems Support) would probably agree with me in the sense that it can be quite a mundane and repetitive job – so I often keep myself occupied by listening to podcasts.

During a wrestling podcast I was listening to, I heard an interview with Jim Smallman who was promoting a wrestling event called “Progress Wrestling, Chapter 1”, which was being held at The Relentless Garage in Islington. Also, one of my favourite wrestlers, Colt Cabana, was scheduled to make an appearance – so my mind was already made up. I jumped on the Progress website and bought a pair. Seeing as my Mrs has been into the WWF/WWE since she was a kid, I knew she’d love to go.

I took her to a live RAW show a few years ago, but I had a feeling that Progress would bring something special – and boy did it deliver.

Admittedly, I hadn’t heard of many of the names on the card as my knowledge of UK Wrestling wasn’t that great. Nevertheless, after Chapter 1 the names El Ligero, Noam Dar, Zach Sabre JR, Marty Scurll, Mike Mason etc won’t be forgotten.

I even got to meet Colt Cabana and buy some merchandise. I guess that seeing as Progress paved the way for me to meet someone I admire, the organisation has my loyalty for life.

It was the first UK Wrestling event I had ever been to, but definitely not the last.

Once I received the Newsletter from Progress regarding Merchandise and the Chapter 1 DVD, I got the Credit Card out and prepared to abuse it. It was so difficult to contain my excitement when the date for Chapter 2 was announced.

I was sat in front of the TV one evening and received the Newsletter on my phone. I immediately grabbed my Laptop, Credit Card and bought 2 front row seats for the event. There was NO WAY I was missing out on this one.

A few days later and another Newsletter was received, this time for the pre-order of Chapter 2 T-Shirts. Aside from the fact that it was a T-Shirt for the event, I loved the Soviet look to it. Given that I’ve got a soft spot for the Commies, this guaranteed another appearance from my Plastic friend.

So, the 24th of June arrives and I’m pumped for the event. Weeks of Tweeting people who also follow Progress and counting down the days was over.

An old friend of mine, Paul (who is also a huge Wrestling fan) had bought tickets to the event for himself and his nephews – based on the amount of excitement I had shown on Twitter – and they weren’t disappointed.

For certain reasons I won’t go into why his **ahem** 14 year old nephew was one of the stars of the show, but buy the DVD. Trust me, it’s going to be GOLD!

Unfortunately, my Mrs had made other plans with my Mother In Law, so I took my friend John instead. He wasn’t a Wrestling fan though. Sure, he watched the old days of WWF and knew who The Undertaker, Hogan, Savage, etc were, but that’s as far as it went.

However, to his credit, he was more than happy to come along and see what all the fuss (that I had been making for months) was all about. Needless to say, he was very surprised with what he saw.

Now, I know I’m not the only one who makes Wrestling references in their day to day lives. I’m pretty sure that some of you have yelled “Holy Shit” or “ECW” when you’ve seen a minor Car accident, or done a Ric Flair style “Woooooooooooo” at inappropriate times.

I once silenced my Gym by doing a Daniel Bryan “Yes,Yes,Yes” after looking down at the scales and saw I lost 3lbs in 4 days.

So, imagine the laugh everyone in The Garage, Islington had when The Lion Kid entered the ring and gave his trademark “ROAR”, which was followed by a Daniel Bryan inspired “ROAR, ROAR,ROAR”. At one point, someone yelled out that African “Arseneeeeee Wengerrrrrr” sounding intro to the Lion King music. Brilliant.

His opponent Stixx was the typical Heel and played his role very well – although he was slated for the amount of chest hair he had. Then again, having a Mediterranean background, I was in no position to poke fun.

We then saw an entertaining match between Mark Andrews and Mike Hitchman.

The banter continued when Paul decided to make it known to everyone in the building that Andrews resembled Draco Malfoy from Harry Potter – which led to loads of hilarious Harry Potter references. This was actually the first time I had ever seen a Face heckled more than a Heel, but its WRESTLING. Not everything is supposed to make sense or go to plan.

There was even a run in after the match.

Up next was, I think (I say “I think” because I can’t remember the bloody order in between the first 2 and final 2 match ups) Noam Dar vs Darrell Allen.

Now, Dar opened Chapter 1 with El Ligero and was subjected to many anti-Scottish jibes, seeing as he is from up there. In fact, during Chapter 1, someone came up with one of the funniest chants I have ever heard, which was “Deep Fried Mars Bars”. If you don’t get the joke, look it up.

This time, however, the bloke who came up with the chant brought a SIGN with “Deep Fried Mars Bars” written on. Classic.

During an exciting match, Dar was given more abuse and at one point he bit Allen's arm and someone yelled “That’s not Kosher” – once again, look into it.

Allen was wearing a black Shoulder protector which he injured at PROGRESS Chapter 1 and someone got away with “Take his BRA OFF”.

After was the first ever Tag Match in Progress – the London Riots vs the Velocity Vipers. Judging by the size of both men, we knew it would either be a squash match or one with a lot of high flying moves. Truth be told, it was both. The London Riots were huge individuals who threw the much, much smaller Vipers all over the place.

Unfortunately, we witnessed our first serious botch when Viper Kid fell awkwardly and had to be carried out. At first we thought it was a work, but found out the day after on the Progress Twitter that he’d broken his leg in 2 places. We’re sure he’ll be back though and wish him all the best in his recovery.

It ended up being a handicap match which can only be described as Funkasaurus and Matt Morgan vs the 1,2,3 Kid (OK, slight exaggeration, but I’m doing this off the cuff, alright?!).

Following the interval, we were reminded that Paul’s nephew was 14 – but given the kid’s sense of humour, he pointed out that he’d just turned 15 – cue a building full of people singing “Happy Birthday”. Unreal. Just unreal.

The first matchup after the interval was the much anticipated Progress debut of Jimmy Havoc. We demanded blood, but we got, errr a Spoon – plus a very entertaining matchup with Danny Garnell.

Truth be told, we all knew that Havoc can do more than just Death Matches.

Garnell was very impressive and showed some ridiculous strength. At one point, Havoc was up against the ropes, upside down, and balancing on his head. Damn, that looked painful.

We saw some “Bro-mance” spooning and even Jim Smallman got some “man love” too. Don’t worry though, it wasn’t in the Homoerotic sense.. Just buy the God Damn DVD man and you’ll see.

The penultimate match up was a 3 way between El Ligero, RJ Singh and Greg Burridge to determine the number 1 contender for the Progress title.

Burridge came out to a massive pop. Clearly “The Cockney Geezer” was a fan favourite. He walked towards Paul’s **cough cough** 15 year old nephew, threw him over his shoulders and walked around the ring. Cue a bigger pop.

In a match full of entertainment, comedy and some high flying moves which resulted in a few bumps outside the ring, a number 1 contender was determined.

Our main event was Nathan Cruz vs Party Marty Scurll in a 2 out of 3 falls match for the Progress Staff.

Those of you who aren’t aware of this, Progress does not have a championship belt. It is a Staff with the Progress Eagle on top.

Once it was unveiled at Chapter 1, a chant of “Nazi Staff” kicked off – and it’s stuck.

Scurll came out to a huge pop and the fist pumping from the crowd began. Cruz, on the other hand got a load of Heel Heat and upon walking to the ring, two rows stood up and did the Nazi raised arm – saluting the Staff. This was so wrong on so many levels, but it was abso-frickin’-lutely hilarious. I took a couple of photos of this and, had my manager not been on my Friends list on Facebook, I’d use it as the cover photo..It was GENIUS.

This match had it all: Near falls, high flying moves, manoeuvres which made you shout “Holy Shit”. There was also a very funny incident which involved an attempted count out and audience participation, which caused a hilarious botch.

The winner was decided via outside interference.

Notice how I haven’t really stated who won? It’s intentional. Of course most of you probably know who won, and if you don’t you can Google it – but I’ve pointed out the funny bits because they alone are worth forking out for the DVD. However, this was one of the best events I have been to. I’ve seen the WWE when they’ve been over here and none of their cards were as entertaining as this.

So, congratulations to Jim, Jon, Progress employees, staff at The Garage, Security, Wrestlers, fans and everyone involved in Chapter 2. This is one event that I, and many others will never forget.