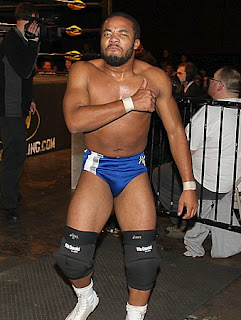 The Indy Corner: Jonathan, please tell us about your training, where, when & with whom with did this take place?

I started training in the end of 04. In Atlanta Ga, USA,under WWA4's head trainer Mr. Hughes,of WWF,WCW and ECW fame. Training with WWA4 and Hughes was in my opinion the best decision I made around that time, in terms of wrestling I mean. The simple understanding of the business is thought at WWA4. The fundamentals are drilled into your head, till it becomes apart of you. Without you noticing it really . I was lucky enough to have this school not even 20 minutes away from where I lived at the time. So I was able to train 4 to 5 days a week, after school or work. A lot of guys you may know came out of WWA4. And some actually still attend. Guys like AR Fox, Uhaa Nation and WWE's Heath Slater just to name a few...

The Indy Corner: Memories of your first match, who did you face etc?

My first match happened for a promotion in Deer Lake Park Ga. for a promotion called BWA, ran by a man named Rocky King. This match took place in front of maybe 20 people. In a very dim lighted gym, that was very hard to find if I might add. But I wrestled then Heath "The Thrilla" Miller, now WWE's Heath Slater,in a match I will never forget. I was able to do and try everything I ever wanted to do in front of those people that night. This took place around march of 05.

The Indy Corner: I first saw you wrestling for CZW, how did you get started with the promotion and tell us some memories of your time there?

From what I have been told, myself and Ar Fox, were seen wrestling each other on our weekly school shows in Atlanta for WWA4, which can be seen on youtube by searching WWA4. We both were offered a tryout, which if I remember right, I missed. Because of a snow storm in South Philly. After that I wasn't seen on a CZW card till a few months after my planned tryout. As for memories, I do remember my first Cage of Death show. This was the absolute first time I had seen CZW live. It was a great show. And I was very happy to be getting this opportunity to work with the company, as it was so unexpected for me. After the event, I went into the locker room to make my rounds. And in doing so I passed Sami Callihan. I believe he was being stitched up at the time, but all I remember was seeing a lot of blood and thinking my God, looks like a chunk of meat/skin is missing from his back..

The Indy Corner: Fill the readers in on other promotions you worked with in the states and moments that stick out for you.

In the states I worked with many promotions. The promotions I worked with on a regular were Chikara, IWA-MS and CZW. I'll start off with Chikara. The moment that sticks out to me most has to be 2011 King of Trios weekend. It was so much talent in the area at the time. And the best part was, me being able to work with and learn from most of them. Also being able to watch Dick Togo live was a real pleasure, as he was to start finishing up his retirement tour after. CZW moments, has to be around the time of 2011 Best of the Best weekend. Either on a day of or before or after a show, can't remember, anyway, CZW held a seminar ran by Chris Hero. I learned a lot form this seminar, he talked a lot about the little things that many don't pick up on, and I believe that is the reason I'm hooked on training seminars now. Since then I have attended over 20 to 25 seminars. IWA-MS moments, I have lots of good memories working for IWA, but the one that sticks out the most has to be an event that happened in 2010, sorry I can't recall the name. It was where a few guys didn't show up for the card, so things had to be shifted around. I ended up being picked to work with then ROH Champion Tyler Black. What was suppose to be a filler for me, ended up becoming a 3 match series with Black, and it all helped me learn how to be a smaller wrestler, in a big man's game.

The Indy Corner: The first time I got to see you live was at Fight Club: PRO in 2011, this was your match against MK McKinnan & Shinya Ishikawa of Big Japan Pro Wrestling. At the time, I thought this was one of the best matches I had seen live, this is still the case, what do you recall of the match?

I actually don't remember a whole lot about that night or the match. I did know after the match that I enjoyed working with FCP and wanted to continue working with the company.


The Indy Corner: Staying with FCP, this promotion is very unique, not only in the UK but in the world of professional wrestling as it’s look and feel is like no other. You have wrestled there countless times, tell us what Fight Club: Pro is like for Jonathan Gresham.

It's my home away from home. Unique yes. Everyone connected to FCP is unique and hungry in their own way. From the fans to the FCP core roster, this is why I value my time with FCP. I feel, that they feel as I do about the wrestling business. I love this business, and we all have the understanding that it owes you nothing. You must hunt it down and earn it! I have always wanted to be apart of something special, and I believe I have found that in Fight Club: Pro.

The Indy Corner: Here in the UK, along with FCP you have wrestled for numerous other companies such as Preston Championship Wrestling and SouthSide Wrestling, tell us what would you consider the best match you’ve had on British soil and do you have any comments on these other promotions mentioned?

The best match I have had... To be honest I can't claim to have had a best match nor a favorite. I can say that I enjoyed competing at every company I have worked for during this time. Preston and South Side, have a roster of Jr. Heavyweights that I'd like to work with that I wouldn't be able to else where. Guys like Noam Dar, CJ Banks and Joey Hayes just to name a few.

The Indy Corner: In the UK you have had a series of matches with Chris Brookes, you have traded victories, tell us about Brookes and your matches with him please.

Brookes I think is a very good wrestler. My matches with him have been very enjoyable, I learn a lot from every match I have, but with Brookes, I learn how to work a totally different body frame. He is another wrestler from Fight Club: Pro's roster that is hungry and eager to learn how things work and how to become better. That is what makes the match to me.

The Indy Corner: Something I’ve always wanted to see is yourself wrestle in ROH, over the last few years has there been any contact between yourself and the promotion and would it be a promotion you’d like to wrestle for?

There has been contact in the past but none as of late. At the moment I want to become better as a performer before I try and pursue anything else at the moment. ROH for me has always been a goal. So yes, I would like to work for ROH in the future.

Ah, OK... The best match I have been in would have to be my 3rd match with Tyler Black, not because of me but because of how much I learned and changed from our first match to our last match. I learned tons from him. The best match I have seen live would have to be between Big Van Walter and Daisuke Sekimoto from this years WXW 16 Carat Gold or Shingo vs Yokosuka 3 from last years DGUK show in Nottingham. Two great bouts..

The Indy Corner: Thanks for your time today Jonathan, anything you wish to plug at all, feel free.

Thank you!
Posted by WrestleFigsUK at 08:46