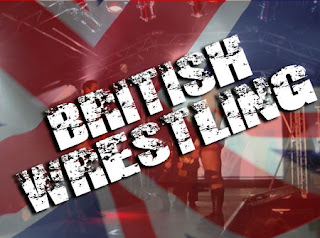 British wrestling has some fine young workers at the moment, I think it's the best crop of guys I have ever seen while being into the British scene. Some of the better ones we have come from not only England but Scotland and Wales too.

I myself am a big fan of Wolverhampton based wrestler MK McKinnan, all the times I have been there in person to watch him live, and there has been quite a few, I have never seen him have a bad match. I really think MK could go far if given the right opportunity and on July 6th that will of arrived when he gets to go one on one with former ROH triple crown champion and current Fight Club: Pro champion Eddie Edwards at FCP's "Die Harder" show in Wolverhampton.

From north of the border we have Noam Dar who is a tremendous worker himself. His stock has risen greatly over the last 12 months, from wrestling a dark match at Dragon Gate UK's excellent show in Nottingham last year to being booked all over including in his native Scotland for the also great Lionheart Adrian McCallum's promotion Pro Wrestling Elite. In July & August Noam has two massive matches one against AJ Styles for PW Elite and against Davey Richards for SouthSide Wrestling in Nottingham. This guy really has got the breaks already and it's just going to get better for him.

Representing Wales there is 'White Lightning' Mark Andrews. Mark is a terrific wrestler, has a great move set and does some great high-flying moves. Mark doesn't limit himself to the UK, like the other 2 guys, he travels round venturing into Europe quite a bit. Mark was in the MOTN at the PROGRESS Wrestling Chapter 2 show on June 24th and good things lay ahead for the young man from Cardiff.

Some of the more well-known British wrestlers on the scene at the moment are Marty Scurll, Zack Sabre Jr, The Rockstar Spud and some to look out for are Ryan Smile, Pete Dunne and Nathan Cruz who is the current PROGRESS champion.

Another promotion who I think will be making waves in the coming months is New Scene Wrestling and it will overall be an exciting time.

Things are looking good for British wrestling and it's a good time to be a fan.
Posted by WrestleFigsUK at 09:17