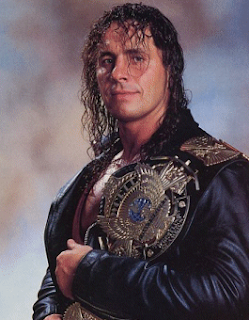 theScore's Arda Ocal (@arda_ocal) sits down with Bret "The Hitman" Hart in the final part of his three part interview. Bret touches on Lex Luger, his opportunity to carry "the ball" for WWE and his role as the champion of the company in the 1990's.

On Ratings after dropping the title to Michaels at Wrestlemania XII and Steve Austin.

On carrying the company through the 1990's

"[Vince] needed someone immediately, like someone right now to carry the whole thing and not drop it. And thats what I love about my era. Its like 'Here, give it to Bret Hart'. And they gave me all that. And you know I say, guys like Flair and some of these guys say Bret Hart didn't draw money, and thats not true at all. I did draw money. I drew big houses. And I had the tough job of having to carry things, I had to be the big star after Hulk Hogan, who was a failed hero at the moment."

On changing the 'rules' as champ

"The big one was I was never a big fan of the big star on the door dressing room. Warrior had it, Macho Man had it too with Liz, but Liz had to change and it was a different thing with Macho, but I always felt Macho earned it. Hogan had the fruit basket, the flowers and the special room with star on the door too. I always felt Hogan earned it too. I never thought he didn't deserve any of that, he did. I know just when it came to me, you know the limo rides, and the limo service and all that, I didn't want any of that" ... "I want to change in the dressing room with the other wrestlers. I don't need the star on the door, I don't want it. Save the "its all a big show" for somebody else, I don't want it. I was the first champion to refuse that" ... "You see guys like Warrior and Hogan that didn't have the time of day for anybody but themselves. I changed that. I wanted to be not just the peoples champion, but I felt like I was the dressing room champion".

In his opinion why Lex Luger didn't become WWE champion