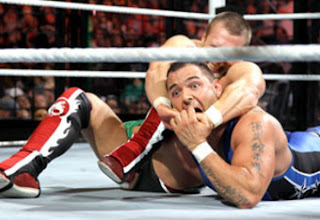 He has many doubting thomas' around the world, some of which are his peers in the WWE Locker Room. After his performance at the WWE Elimination Chamber PPV there has to be no doubt in anyone's mind that Santino Marella is a top contender for the World Heavyweight Championship.

If we take a look back at last years 'Road to Wrestle Mania', Santino Marella was in the final 2 of the 40-Man Royal Rumble match, he became close to winning on an number of occasions against Alberto Del Rio, but he came up short. He lasted just shy of 13 minutes in that single match.

In a losing effort at the 2011 Elimination Chamber event, he walked in as 1 half of the WWE Tag Team Champions along side Vladimir Kozlov. He put up a tremendous fight against then The Corre members Justin Gabriel & Heath Slater.

At Wrestle Mania XXVII he was in the winning team in a 8 man tag team match. His partners were Kofi Kingston, Big Show and Kane as they took on The Corre members; Ezekiel Jackson, Justin Gabriel, Wade Barrett & Heath Slater.

This year, Santino Marella's 'Road To Wrestle Mania' has proven yet again a smoother ride than most WWE Raw and SmackDown superstars.

He may of only lasted 2 and a half minutes in the 2012 Royal Rumble match but that is to be expected for some superstars when it is the traditional 30-man match.

I am a believer of Santino Marella.

What does this year's WrestleMania have in store for our favourite WWE italian (sorry Tom Brandi)? We'll have to wait and see.