India - Who Knew? By Jimi James 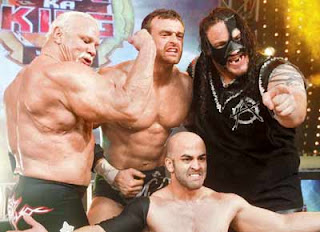 The Great Khali is back in WWE. He made his comeback at the Royal Rumble and has a spot in the Elimination Chamber. No, he's not back because of fans petitioning for him to come back. He isn't back because WWE is lacking without his mic skills and in ring ability. He's back because WWE might be a little worried.

Ring Ka King debuted in India and I think it may have turned heads in WWE just a bit. Just a short time ago, WWE had interest in India. India was an untapped market for wrestling that the native people have been begging for. But the WWE never did anything with India and chose to remove interest from establishing a market there. Shortly after they let Khali go without renewing his contract.

Interesting that the week Ring Ka King debuts, Khali returns at the Royal Rumble. Now this is all speculation on my part. I've read statements from some who believe Khali is back in WWE because of Ring Ka King, but nothing confirmed. I should say this for those that don't know, Ring Ka King is a TNA project.

As I write this, Ring Ka King has aired four episodes, crowning a new Heavyweight champion in Matt Morgan. I have watched all four episodes, and I cannot endorse the product enough. It is refreshing to watch. I say it's refreshing because it's not often one gets to watch a new wrestling company start fresh on a grand scale.

Now, being that this is an Indian wrestling company, part of the show is in the native tongue of the country. But, this is not an issue. The commentary is primarily Indian, but the passion of the announcers, particularly Joe Baath, makes the language of wrestling universal. I stated while watching that I like the announcers for Ring Ka King better than any other announce team going today, even though I don't understand a word.

Ring Ka King also does a great job of using big name veterans to grab prospective viewers attention. But, the best part of Ring Ka King is the use of native talent and giving a shine to talent that wasn't allowed to get over elsewhere. Names like Isaiah Cash, Hollywood, American Adonis, Zema Ion, Dr. Nick Dinsmore, Bulldog Hart, the Sheiks, and others have a chance to be stars like they should be. What, you don't recognize those names? I guarantee you know who they are.

The best part of the episodes is the audience. Again I say refreshing. The crowd is passionate about wrestling just like we are. Americans cut promos in the ring and the fans are trying to understand. But, Indian fans know, it's not what you talk about, it's what you do in the ring. For example, Chavo cut an in ring promo to which the crowd was indifferent. When the Sheiks interrupted and attacked Chavo, the crowd went nuts as Chavo fought them off. Also, in India, Scott Steiner can put his hands on a heckler in the crowd. Now who doesn't want to see that. In wrestling, the crowd makes the show, and India gets it.

I didn't detail the episodes on purpose. I want those that read this to go and check out Ring Ka King for yourselves. Watch the episodes and think to yourself as I did, Man, WWE blew I huge opportunity here. Sorry WWE, Khali is great, but not great enough to stop this momentum. TNA is cornering the market in India, and WWE let it happen.
Posted by WrestleFigsUK at 20:30