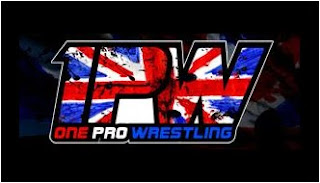 It had been several years since Doncaster had seen professional wrestling grunt and groan into town with the demise of the small but perfectly formed Combat Pro Wrestling. It was decades since the likes of Les Kellett, Mick McManus and hometown hero Catweazle had performed to sellout crowds at the Corn Exchange. The Wrestling fans of the former mining town in South Yorkshire were left with their TV sets for twice weekly doses of WWE and nothing more. But one afternoon in the summer of 2005, posters appeared in shop windows across town announcing all that was about to change.

1PW was coming. A wrestling promotion the likes of which had rarely been seen on these shores would debut in October at the Doncaster Dome. Combining the best of the vastly improved British scene with stars of the US Indies,it was a show which blazed brightly for almost 6 years before imploding in infamy, argument and debt.

Over it's short life, 1PW provided British fans with incredible matches, a start for new heroes and a return of aging legends. The British scene had stepped up it's game in recent years with Jody Fleisch, Johnny Storm, Doug Williams & Nigel McGuinness all making a name for themselves on both sides of the Atlantic. They took part in epic battles at 1PW, particularly memorable was Williams & McGuinness vs. Mohammed Yone & Takeshi Morishima for the NOAH GHC Tag Team Championship. A rare appearance for the Japanese title saw a strong style masterclass that thrilled the crowd with every crashing chop and crippling hold.

The 1PW Tag Title saw classic teams matched which were fan dreams. AJ Styles & Christopher Daniels, Ricky Reyes & Chad Collyer, Austin Aries & Roderick Strong, teams which would grace any show from ROH, PWG and other top US promotions. Perhaps the favourite among the crowd were Team Shag,fluffy dice wielding sexual intellectuals, Colt Cabana & Darren Burridge. Their matches never missed an innuendo, to the uproarious laughter of those in attendance.

The Openweight championship brought high flyers like PAC,(the 1st holder of
the belt), El Generico,(who had a tremendous bout with El Ligero at the 1st Anniversary show) and final belt holder the now Rockstar Spud.

The Heavyweight Title was not ignored, held for a long time by the legendary Steve Corino, saw great story lines with increasingly brutal payoffs. No Rope Barbed Wire Hell and Falls Count Anywhere matches in Doncaster just two of the stipulations which saw Corino battle Abyss and 7 foot fire-breathing German Ulf Herman. Brief runs from WWE's Christian & Goldust,(both then with TNA), added to the spectacle. Raven threatening a referee at a Doncaster Rovers match turned up the heat. The show was boiling up until it was ready to blow. Unfortunately, blow up is exactly what it did.

Bringing over big names from the US wasn't cheap. When you try to step up to the next level by bringing Bret Hart and Ric Flair to appear the expense rises considerably. Add to that, an attempt to stage large shows elsewhere, 1PW was hit by a financial piledriver. Late 2009, after a show headlined by Rob Van Dam, an apparent end came. Yet money was pumped in and a resurrection began a year later. Shows across the North West were to build to another epic in Doncaster, complete with a Pro Wrestling Eve vs. Ice Ribbon curtain raiser and an appearance by the Heartbreak Kid himself, Shawn Michaels.

That show never happened. Rumblings began when tickets failed to appear and grew louder when Michaels called out the promoters on Twitter. The writing was on
the wall. Behind the scenes, promised financial backing wasn't forthcoming and 1PW closed it's doors amid bad blood among promoters, wrestlers and fans alike. Terse statements were issued by those within 1PW felt wronged by the money men, but it all came down to one thing, 1PW was gone.

Without talking to those involved, it's impossible to comment on the financial
problems. One thing is for certain, for nigh on 6 years, a great deal of joy was brought to thousands of wrestling fans who flocked to Doncaster from across the UK. The blood and bruises suffered by wrestlers translated to cheers and boos from fans. Memories were made, legends were created which will live on until the next great promotion grips the throats of fans and slams them through a table.