Have WWE Peaked Too Early? By Matthew Burrows 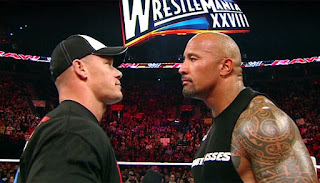 I have watched every PPV and every RAW for the past year and we have seen the storyline build as we get to the grandest stage of them all, and we get the match everyone wants to see, apparently, John Cena vs The Rock.

It was announced on Raw nearly a year ago, and it was huge, but we all asked the same question at the time. How were they going to keep it fresh and how would they deal with the fact that The Rock wouldn't be on tv every week. Well to start with it slowly built in to something fresh and something worth watching, Cena and Rock (via satellite) going back and forth on each other and now probably the reason there has been a surge in the sales of Fruity Pebble cereals.

The was lots of fun segments of more and more things to trend on Twitter and to make sure that people tuned in.

It then lead to quite possibly one of the most pointless matches that seemed so thrown together and a waste of The Rocks first match back in a tag match against Miz and Truth at Survivor Series. It was a lousy match and added absolutely nothing to the feud.

Then for some reason to fill the time of getting Cena to Wrestlemania they decide the best option was to put him in a feud with Kane and for good measure they decided to throw Eve and Zack Ryder in to the mix for fun as well. Though after all the build up and multiple beatings we were approaching March so that had to end and was finished in a stupid match that saw Kane beaten and Eve turned heel. Well that was worthwhile and it would Kane has forgotten the feud and moved on and we have ignored the whole Ryder absence.

Then here we are, it's 5 weeks to go so it was time to fit the Rock back in to TV and rebuild the feud, but can anyone explain to me just exactly what the hell that was last night on Raw. The Rock had pretty much nothing new or worthwhile to say, Cena did a random response and then Rock babbled on again. The whole think was atrocious, is this really how we are going to go for 5 weeks.

If its the plan, I am going to get so bored with and fast. I think the trouble is WWE are so paranoid that either of them will get hurt before the big day that they won't let them go at in a proper WWE feud. The whole thing is begging for some violence, it's begging for something to inject some excitement in to it.

At the moment I am buying Wrestlemania in spite of the fact that these two are on the bill, of they don't do something very soon then they could have another Goldberg/Lesnar match on their hands again.So step it up Vince, making me interested again, make me want to pay you the £15 of my hard earned money and please try and do it with some cereal, crotch or twitter trend which would be great.

Any comments, hit me up on twitter @buzzuk
Posted by WrestleFigsUK at 07:43