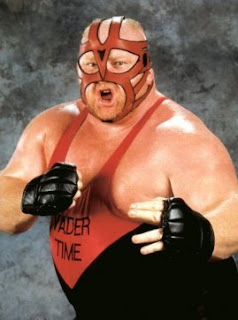 Arda Ocal has sent this over to me, worth a look guys.

His upcoming appearance at WrestleReunion that will be taking place in Toronto, Ontario taking place from April 13-15


What are this thoughts on Ron Simmons being inducted into the WWE Hall Of Fame:

" You know this is the first I've ever heard about it. Just a fantastic guy. High quality individual,extremely strong, extremely quick. He is a good friend of mine, we had some great matches together. Congratulations to Ron, and hes gonna be a great representative for the WWE"

One of the most distinguished characteristics for him was his leather mask. How did it come about, how did he start wearing that in the ring, also speaking about how he wasn't the original choice for the character Vader and the two wrestlers that were presented the "Vader" character in Japan before it was given to Leon White.

Was there any struggle in keeping the Vader character when he joined WWE in 1996:

" Vince McMahon and I talked about that, what I think he really wanted to do was change the character and come up with something new. It was something I felt strong about, and we kinda butted heads about that part of the negotiations. I look back on that and thought maybe I could have done 2 characters, had Vader in Japan, and did The Mastodon here in America. You never know how that could have turned out"

On his rivalry with Shawn Michaels that lead to a match in the main event of Summerslam 1996, was there a conversation that we would win the WWE Championship during that time:

" Yeah there was, obviously it never happened. Shawn wasnt just over he was like the man. In his entire career in WWE he was the star. When I got there Shawn was the guy, boy what worker. He could get the job done. Fluent athlete, could do anything, just period. Didn't matter what you asked him to do, he could just do it. Didn't work out for me in the WWE, but I look back at my time there, and I enjoyed it, it was a great deal"

About the incident in 1997 in Kuwait where he appeared on the talk show "Good Morning Kuwait" and threatened the host when he asked him if wrestling was fake. Was he trying to protect the wrestling business?

" I never touched this guy, I physically never touched him. I wrapped my finger around his tie, and bent down and was asking. From my understanding, I was doing exactly what I was told to do period. Undertaker and myself was on the set , and we were gonna wrestle that night. It was a great opportunity to promote our show, the agent told me what to do and I did it"

Speaking about an upcoming sumo wrestling tournament that he will be competing in in Japan:

Sharing thoughts on health problems, being in a coma and remembering parts of it and what led him to change his life around, working with Wounded Warrior Project and Mighty Oaks Wounded Warrior Foundation.


FULL 35+ MINUTE INTERVIEW CAN BE FOUND HERE: http://blogs.thescore.com/wwe/2012/02/28/aftermath-radio-interviews-big-van-vader/
Posted by WrestleFigsUK at 08:45