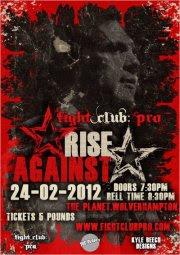 Credit for the great poster goes to Kyle Beech of Kyle Beech Designs, check them out on facebook

I don't usually do previews for shows but man, I'm so hyped for this one I just have to.

This coming Friday at The Planet in Wolverhampton, FightClub: Pro are back in action again with Rise Against 2012. The card has just got better and better over the last two weeks. Anyone who listens to me on The Indy Corner will hear me every week put this promotion over and it's because their product is amazing and this card is one of, if not the best they have put on.

First announced was 'The Super Don' Trent Seven against Clint Margera. These two faced off in a ladder match for Seven's then FCP championship, Seven got the win in that match but Margera was very close to winning at one point in the match. Now, with no title on the line, the two guys who have nothing but respect for each other will go at it one more time as Margera aims for Infinity 2012 where he wants to win the Infinity trophy and Seven is striving towards regaining the FCP title once again in 2012. This will be British Strong Style at it's best and one NOT to be missed.

Below: Action with Clint Margera from the last FCP show - Resolution (Credit to Ben Ward)

The second match announced was the debut in FCP of Chris Brookes, Brookes who has been working on other shows while striving to get on an FCP show has finally got his wish after many fans on twitter having a #wewantbrookes campaign and FCP have listened and now he makes his FCP debut against the one and only 'Baby Jesus of British Wrestling' The Rockstar Spud. For all intense and purposes, Spud found out about the match while being interviewed by this very writer on The Indy Corner which if you haven't heard you can hear it if you CLICK HERE Spud wasn't entirely pleased with the announcement of his match so Brookes will feel the wrath of him at Rise Against but I'm sure, despite it being his debut in front of the rabid crowd Brookes will do OK.

The third match announced was 'The Bastard' Dave Mastiff vs. 'The Death Machine' Sami Callihan. These two have history stemming from FCP's Project Mayhem Night 1 when Mastiff involved himself in Callihan's match with Trent Seven. Last month at Resolution, Mastiff battled Seven to a time-limit draw and that was a match and a half but this one is going to be off the charts for stiff wrestling and one that I am really looking forward to.

The final match announced features 'The Future' MK McKinnan who will once again face off against Jonathon Gresham of CZW but this time in the match there will be another CZW wrestler in the match and that is none other than the amazing AR Fox also of CZW fame. Many of the FCP would have seen Gresham live before and of course seen McKinnan before but for them, like me, it'll be the first time I have seen Fox live. The guy is an amazing wrestler and for me, Fox vs. McKinnan is somewhat of a dream match and with the added spice of Gresham in the match who got a win over McKinnan on the aforementioned Project Mayhem Night 1 will make the match that much better because MK will be looking to get a win over him but of course having to worry about Fox. This match should be a cracker and I just can't wait.

Below: Action from MK McKinnan's match from Resolution in January (Credit to Ben Ward)

Guys, if you can make this show please do, it will be AMAZING CLICK HERE on the facebook page for the show for further details.

And below we have a video featuring AR Fox in CZW against a man who is also known to the FightClub: Pro fans - Adam Cole