The Boys Ripping on The Rock - Really? By Stuart Rodgers 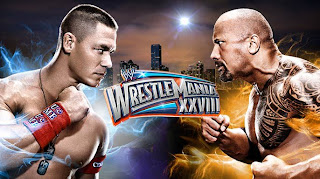 It's no secret I'm not the biggest fan of the WWE but I do listen to a lot of wrestling podcasts and as you can guess, they are top heavy with WWE talk especially now on the road to Wrestle Mania. Now, speaking of the 'grandaddy of them all' we know The Rock will be facing John Cena on April 1st in Miami. Cena is of course doing what he has to do leading up to such a big match and he's cutting his promo's on The Rock etc. but the word from 'behind the curtain' is that there are many guys in the WWE who are not happy with the fact The Rock is coming in for a short while, promoting a movie then getting a massive pay-off for the main event of Wrestle Mania before disappearing into the Hollywood wilderness once again.

I look at it in a couple of ways, first, this Mania will draw millions of dollars and it will trickle down through the entire roster and company be that for the guys who are on the card that night or for business after Mania when people will still be hyped, more will come to the live shows and TV ratings should increase which again, will bring more revenue into the company and everyone involved will see the benefit of.

I really can't understand why these guys, whoever they are, are hating on The Rock rather than seeing the bigger picture.

My second opinion on this subject, the guys are moaning about The Rock coming in but what alternatives do the WWE have? There just isn't the roster of genuine stars to put in that position. Take a look at the title matches, for the world title you have Daniel Bryan defending against Sheamus now DB is a guy I have followed for years, I was a massive fan of him on the indies and although I didn't like it, I sort of agreed with a lot of people who said first he'd never win the title despite having the MITB briefcase and then, after winning it, again, a lot of people said he wouldn't have the title when he walked into Mania, now I know we're not there yet but it looks like he will be champion at Mania but is he what would be considered a wrestler worthy of defending a world title at the WWE's biggest PPV of the year never mind probably the biggest PPV ever? Also, his opponent will be Sheamus, someone who has held a major belt in the company before but again, is he really at that level for Wrestle Mania?

The other title match, the WWE title one features CM Punk, again, another darling of the indies, and he'll be facing Chris Jericho who has been back 5 minutes and if rumours are true, he'll be off again shortly after Mania to do the music thing but I wonder if the same guys who are ripping on The Rock are ripping on Jericho for coming back for a short while to 'take a spot' and get a big pay cheque (yes that's how we spell it here in the UK)?

Oh and let us not forget The Undertaker, his last match was at last years Mania and he's coming back and unless something happens, this will be his first match since Mania last year. For me, that's worst than The Rock, I mean The Rock has been around quite a bit more really, even had a match on PPV. People though won't rip on 'Taker because he is the 'locker room leader' and deserves respect, bs I say because if you can rip on The Rock for the what he is doing (and let's not forget, WWE are the ones who decide who comes in) then why should 'Taker or Jericho get away with it?

I have jumped around a bit in this article but the point of the article remains the same, the WWE just doesn't have the guys that can cut it, like it or not, The Rock may only be in the WWE every now and then but when he's there, the fans react, he can make them 'pop', The Rock is a star.

Listen to me on the MFX Podcast every week doing The Indy Corner right here - http://mfxpodcast.com