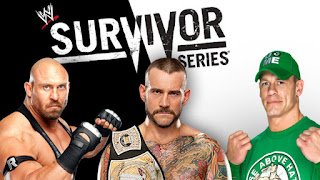 I have sat through last night's RAW as it was in my home city of Birmingham, England and yes I did fast forward through an awful lot of it but one thing I picked up on is I see they have taken Punk & Ryback out of the 5 on 5 traditional Survivor Series match and put them in a WWE title match along with John Cena to make it a three-way. Now, people may be wondering why I'm writing a WWE based column as not only I don't really watch the product but usually I have a negative outlook on the style too but I am a fan of the stuff they did yesteryear because when I got into wrestling the Survivor Series was a big PPV to look forward to, the elimination match concept was great. In fact, the first Series I saw was the 1990 one which not only had a number of these elimination matches but also a grand match of survival with the winners of each match coming together at the end, heels vs faces which is something I've longed for them to bring back. Another Survivor Series match they did back in the mid 90's was the 'wildcard' match which saw heels & faces on the same team and partners from standard tag teams against each other, again, this is a match I wish was brought back as the years have gone on.

Onto the point at hand, I'd like to know what WWE fans think about this change to the match, it was first Team Foley vs. Team Punk but Foley announced he wasn't competing, that was OK, we knew Ryback had to come into the match but then the match got blown apart with the announcement of the WWE title match because now Punk wasn't going to be in the 5 on 5 match which I think would have given some credibility to the match with the champion involved. I am one usually who thinks the champion should be in a title match at each PPV but not this PPV as this is once a year.

This is just my opinion of course, I'm interested to know what you guys think, let me know in the comments below or on twitter @WLHSTU
Posted by WrestleFigsUK at 03:32