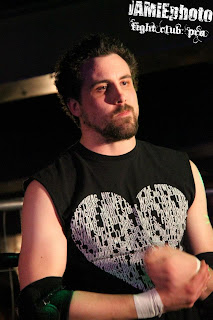 (Above: This is the man himself Clint Margera - Picture supplied thanks to JAMIEphoto)

In the run up to Fight Club: PRO- Project Mayhem 2 which featured the stars of Combat Zone Wrestling, I conducted an interview with The Indy Corner. During the interview I was asked about being a 'Deathmatch Wrestler' and what made me want to perform in that environment.

Whilst talking about my influences etc I brought up a comment that I have seen/heard banded around on the internet or at shows. "Deathmatch wrestling isn't real wrestling". First off, people have their right to an opinion but to make such a comment without any kind of valid argument to back it up makes it just a throw away and in some cases, ignorant.

I know that this style is not everybody's cup of tea but, for the people that enjoy watching it and more importantly the guys who put themselves in these matches, I think its unfair to look down on them and announce them as not being 'real' wrestlers.

What people don't realise is that a lot of the guys that do this ARE very good and in some cases Excellent wrestlers.

To me it basically comes down to respect for the guys that do it well which should be the same for all styles be it 'Strong Style, Technical, Lucha' etc. There are different styles of wrestling just like there are different styles of films or music. A fan of films wouldn't say ,"horror films aren't real films" or a fan of music wouldn't say , " heavy metal isn't real music".

So if you're a fan of wrestling on a whole , then shouldn't it be that all
styles and genres have their place in this thing we all love?

Follow Clint on twitter @ClintMargera and keep up with the happenings of Fight Club Pro over on facebook and check out http://fightclubmerch.com
Posted by WrestleFigsUK at 11:53