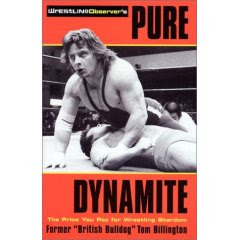 Horrible sadist or sufferer of 'roid rage? Small man syndrome bully or evil genius prankster? Bitter former wrestler or passionate brutally honest former wrestler? You decide when you purchase and read this explosive squared circle self told story. Picking up a plethora of recognitions from the Wrestling Observer Newsletter such as a 5 Star Match with Tiger Mask (Satoru Sayama), Match of the Year with Tiger Mask, Tag-Team of the Year as the British Bulldogs, an inductee of the Hall of Fame, and in 1984 alone Best Technical & High Flyer wrestler and the Best Wrestling Manoeuvre for the Power Clean Dropkick. The Dynamite Kid would also win championships world wide from Canada to Japan, to the U.S. Of A and England. The more notable titles were the WWF (World Wrestling Federation, now WWE) World Tag-Team belts with Davey Boy Smith, the NWA International Junior Heavyweight strap, and the Stampede North American Heavyweight championship all in a respectable 13 year career.

Tom Billington, the Dynamite Kid starts with a brief introduction to his upbringing. What it was like to be one of, if not the smallest kid in his neighbourhood. The paths both his father and grandfather had taken in physical combat sports, which would ultimately lead a young Tom into taking up boxing and getting into a lot of fights as a youngster following his dad's mantra. At the age of 12 he would find himself being taught how to wrestle by Ted Betley, before being sent on to various notorious shooters including a short stop at Riley's Gym A.K.A. The infamous Snake Pit. Eventually settling with Billy Chambers' (Jack Fallon) gym to learn the art of shoot wrestling. Dynamite talks of his time wrestling around the scene in Great Britain until being scouted by Bruce Hart of the Calgary, Canada based Hart Family. Jumping at the chance the story moves along swiftly to adjusting to being in Canada and now wrestling exclusively for Stu Hart's, the patriarch of the Hart Family, Stampede Wrestling and continuing his training in the now world wide known Dungeon. Yet more opportunities would arise for Billington as wrestlers in Stampede had connections to New Japan Pro-Wrestling (NJPW) leading to Tom's first tour of Japan under the umbrella of Antonio Inoki's company. Dynamite comes across very blunt through-out his story telling it the way he saw it or in same cases as he suspected it may have been. From his start in professional wrestling to his tours for NJPW is worth reading about, then to hear of his transition to All Japan Pro-Wrestling (AJPW) and the manner in which it happened, shows a different side to Ki-Do then previously shown in his book. His frankness in regards to the Hart family is present the whole time he talks of his time in Calgary pointing out what he felt was the truth about the beloved family, however he does not let the reader forget how good the Hart's where to him and how much he appreciates all their good deeds to him along with remembering the bad. The same manner is kept up for his time in AJPW followed by the WWF. Not once does Tom relent in sharing his opinion on situations and other wrestlers from Bad News Brown, to King Haku, Harley Race, and Hulk Hogan plus many more of that era. Dynamite discusses the injury that was the beginning of the end for his career even if he did persevere for several years after it occurred and a serious warning from his doctors. Billington goes on to discuss the well-known incident with the Rougeau Brothers from his perspective shedding a different light on the matter than what other wrestlers have recounted. Naturally the departure of the British Bulldogs from the WWF is discussed in great detail including the subsequent demise of Dynamite Kid and Davey Boy Smith as a tag-team. Tom openly talks about his personal demons including cocaine, steroids, halycon, and his marital issues that ultimately lead to him leaving his children and a mutual divorce. With all of this taking place time begins to wind up his life story by recounting his final tours of AJPW and occasional matches on the British circuit until his career was finally ended for good after a consult with a doctor. The Dynamite Kid finishes his story off by commenting on the modern product and how he found his recent (At the time of writing) visit to WWF's PPV Rebellion in Sheffield, England.

Pure Dynamite is an autobiography that can make you laugh, that can make you sad, can make you cringe at the violence, and by the end of it still leave you feeling uplifted if you so choose to perceive it that way. At times Tom Billington does seem like he holds a grudge against a certain individual but in all he comes across very happy with his in ring career. There's only two complaints with this book, one being it isn't the best written autobiography and although Tom is open at the business he persistently blurs the line between wrestling matches being a real competition and a staged act of athleticism. Overall this is a good book for any fan of Stampede Wrestling, 80's WWF, Japanese Promotions in the 80's – early 90's, and of course any fan of the Dynamite Kid himself. A thoroughly enjoyable read.