The Ryback Question By Shaun Nichols 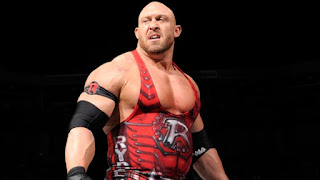 You would need to go back nearly 25 years to see the WWF/WWE give a wrestler the kind of push that Ryback is currently enjoying. The last man to enjoy a similar push has to be the Ultimate Warrior. The Warrior like Ryback had a unique look, had a presence even if you couldn't call him charismatic and wasn't by any means a good wrestler.

But he did connect with the fans and was given quick and convincing wins over his opponents which only helped to convince the fans at the shows and those watching at home that the Ultimate Warrior was something very special. The only difference is that the WWF in 1988 is a far cry to what the WWE is in 2012. Back in the late 1980's there was only four PPV events a year, the TV programming was mainly squash matches and being able to cut a reasonable promo in the cartoon world of the WWF was an advantage not a necessity.

When the Ultimate Warrior beat the Honky Tonk Man in less than 2 minutes at Summerslam 1988 a major star was made. We haven't seen that kind of booking of a wrestler since that time. Sure we have seen major stars over the last 20 years like Bret, Shawn, Austin and The Rock but none were given the Warrior style push.

Ryback is not the new Goldberg.

Most fans see Ryback as the new Goldberg rather than a new version of the Warrior. The reason presumably is because he looks a bit like Goldberg rather than anything else. The advantage that Goldberg's push in WCW had was that it was allowed to take its time and wasn't rushed. WCW had a ridiculous number of wrestlers on the roster so WCW could feed Goldberg a never ending supply of new wrestlers to beat not only on TV but also on PPV where as time went on he went through the low card talent, then the mid card talent until finally he was mixing with the main event talent. As Goldberg continued his ascent with WCW it was done in a steady and progressive manner which allowed fans to get behind the new star rather than resent him being forced down the fans throats.

We haven't seen this with Ryback, the WWE roster obviously isn't as big as WCW's was in the mid 1990's so Ryback wouldn't be able to take exactly the same path as WCW gave Goldberg. However it was only a few weeks ago that Ryback was being booked in handicap matches against jobbers and his major feud was against Jinder Mahal before he found sanctuary with 3MB.

Yet presumably because Ryback as the look that Vince McMahon loves he has been rushed from a low card position straight to the main event matches. You cannot blame the WWE for trying to create a new star, many fans have often complained that the WWE are happy to rely on John Cena to carry the show so when they are attempting to do something about this you have to give them some credit.

However Ryback in many ways is not ready for this new position, his match with CM Punk at Hell in a Cell clearly illustrates that the company does not trust him to do much more than running into a corner and throwing a clothesline. His attempts to sell are frankly embarrassing and his character really shouldn't be selling that much anyway. But if you are putting him 15+ minute matches you cannot avoid the fact that he will need to sell and as a babyface he'll need to do that for the majority of his matches.

He cannot cut an interview and while it was funny to listen to John Cena do a promo for him once it is not something that can be done on a regular basis. There is always the option of giving him a manager to act as his voice piece but as a babyface who runs through his opponents it is difficult to rationalise why Ryback should suddenly gain a manager. A heel turn would allow him to add a manager to his routine which would help a lot in the same way that Paul Heyman added a lot to Brock Lesnar in the first run.

It is a shame for Ryback that he was taken from the 5 vs 5 elimination match where he could be protected and just come into the match to quickly pin his opponents and then tag out. It would avoid the need to sell which will hurt his matches terribly instead he is a part of the three way which will not be a good match, where there seems to be an obvious finish which is Ryback hitting Cena with Shellshock but then Punk stealing the pin. Or maybe Ryback will win and then lose it at TLC by falling through a table so we get CM Punk vs The Rock at the Royal Rumble which is going to happen whatever occurs in the next few weeks.

I don't think that the WWE are wrong to try and create new main event talent but they are simply rushing Ryback too quickly. He cannot flourish in longer matches, his interviews for what they are will get incredibly old very very fast. The Royal Rumble match will be a golden opportunity to put Ryback over the top using his strengths rather than highlighting his weaknesses. A late draw and then quickly eliminating the remaining wrestlers would be the perfect way to give him the chance to become a difference maker. I wouldn't disagree if the WWE chose to have Ryback winning the Rumble if they really do believe he is a big part of the future. Better yet if the WWE decide to let Big Show keep the World title until Mania then it would be the perfect story for Ryback to win the Royal Rumble and then to go on and win his first title against the unbeatable giant at the biggest show of the year.

If I had to push Ryback then that's what I would do, then only time will tell if that's what the WWE will do the same.