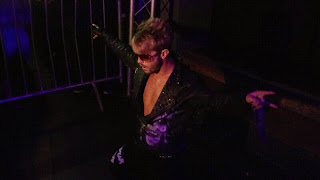 On night 1, those in attendance saw Fight Club Pro go down 3-2 in the Project Mayhem Series, a massive brawl broke out to close the show (including a rather biased war cry from Mark Adams, the FCP ring announcer) and a surprise appearance of Rockstar Spud. Night 2 of this weekend event had the makings of an absolute spectacle.


Early exchange of holds and technical skills at the beginning. Brookes takes a lot of punishment in the early stages, before Gresham tags in and starts exhanging chops, but soon falls to a big boot to the face. However, Gresham fights back, and has a series of quick tags in with Brookes to keep momentum. Dave Crist takes a monkey flip to the bottom turnbuckle, manages to tag in his brother and gain advantage over Brookes again. Brookes is being worn down heavily, and is only being saved by Greshams interference, however the ref misses a tag, and Brookes gets double kicked in the head by OI4K, Gresham breaks up the count again. Brookes is really worked on here, til Gresham gets the hot tag. This starts an excellent spell of  tag team wrestling, and even Brookes somersaulted onto OI4K on the outside! Gresham is in hitting DDts, and a tope rope cross body for another 2 count. Eventually Gresham and Brookes won with a roll up.

OI4K and Gresham/Brookes shook hands to applause. Good start to this show, with a lot of great tag action at the end.

I never get tired of seeing Spud's Livin’ On A Prayer entrance, and if he goes to TNA I don’t think it will travel with him, which is such a shame. It should be seen everywhere! However, Greg Excellent didn’t want to be outdone on the entrance stakes, coming out to Rick Astley ‘Never Gonna Give You Up’ and having some interesting moves of his own...

Excellent won the early exchanges, using the size and weight advantage that he has. Spud wasn’t to be deterred challenging Excellent to a test of strength. This was an utter epic fail with Excellent shouting ‘What are you doing!’ before crotching Spud, giving him some brutal chops and even a nipple grip, leaving Spud trying to escape out of the cage. Rockstar Spud gained the advantage after slamming the cage door into Excellent’s face, getting him back into the ring and taking him down with a series of kicks and punches. Spud somehow managed to pick up Excellent and slam him. However the extended celebration gave Excellent enough time to recover and channel Hulk Hogan (to the hilarity of the audience), giving Spud the big boot and the leg drop for the 2 count. Spud is dazed and thrown into the corner. Excellent then takes off his singlet and performs a rolling powerbomb in his pants on a destroyed Spud. Excellent then finishes Spud off with a Tiger Driver for the win

This was a brilliant comedy match. Both guys played their parts so well. Spud should be a TNA star, only time will tell…

Hyde took it Trent at the start of this fight with lots of chops and punches even getting him on the cage to deliver some evil sound chops. Trent was again barged into the cage by Hyde, and the count started from the ref. Hyde got Trent into the ring just before the 10 count and continued the assault, slamming Trent to the mat, but only getting a 1 count. Hyde applied a choke, taking it up to the 4 count, put the big boot and boss man slam onto Trent and still couldn’t get the 3 count. Trent manages to get a some offense getting a big slam on Hyde for a near fall which resulted in both men being down. Hyde and Trent manage to get up, and start a nasty exchange of chops after Trent spat in Hyde’s face. Hyde rakes the eyes of Trent, getting a suplex followed by a piledriver for the 2 count. Hyde takes it to the tope to get a win, but misses a frog splash. Trent is up, but is given a clothesline from hell for the 2 count. Hyde is getting frustrated now, as he can’t put Trent away. He’s given another piledriver, and still Trent kicks out at 2. Hyde’s resorts to high risk moves dragging Trent to the top rope. However Trent manages to stop him, reverses and hits a sick top rope piledriver for the very hard fought win.

Very hard hitting match with a lot of cool spots. Couldn't believe the piledriver from the rope finish, simply brilliant.

This match was evenly paced at the start, which each wrestler feeling each other out. Hunter got advantage by locking the surfboard on Colon who managed to escape. Colon hit a hurricanrana onto Hunter. Colon got a near fall on Hunter. Lee Hunter started to gain some offence, Colon got back into the match by raking the eyes of Hunter and throws him out of the ring. Hunter gets a big kick to Colon's head, gets back into the ring and does a suicide dive onto Colon and into the cage much to the delight of the crowd. He also hits a sweet insiguri kick on Colon off the ring apron. The action eventually gets back into the ring. While Hunter jumped onto the top rope for a high risk move, his knee gave way and he landed onto the mat. However, that didn't deter him, and following a series of roll ups and near falls, Hunter manages to pin Colon for another Fight Club Pro win.

They went at each other as soon as the bell rung. It didn’t take long for the blood to flow in this match Margera missed a dropkick and was immediately dragged to the table with carpet strips by Masada where they both were dragged along the carpet and getting cut open. Both guys are also slammed into chairs taking even more punishment. Masada reversed a DDT attempt and slammed Margera onto a tray of upturned forks. He then put the tray onto Margera and stomped on it, causing more damage. Masada then picked up a handful of bamboo skewers, and stabbed them into Margeras head sticking in for quite some time. Margera returned the favour on Masada, both being left with a lot of skewers in the head. That was crazy!! Still a near fall attempt was made after Margera managed get a top rope drop kick flush on Masada.

This brutal fight then went into the crowd. Masada suplexing Margera on the stage, dragging him through the railings, breaking a beer bottle and raking it across Margera's head!! Masada got him back into the ring and inflicted more punishment on Margera. Margera dropkicked Masada into a crucifix of light tubes which just exploded, went for the pin, but only got 2. There were a couple more near falls for Margera, but Masada isn’t staying down. Margera then goes outside, and brings in a huge roll of barbed wire!! Masada recovers then powerbombs Margera onto the roll of barbed wire for the pin. Utterly exhausting and amazing stuff.

Absolutely brutal match. Everything a deathmatch should be and more, with a couple of surprises in between. I never know what Margera is going to pull out of the bag, the man is crazy. Both guys took a hell of a lot of punishment. Just brilliant, if a little sickening. The ‘This Is Awesome’ chant from the crowd was truly justified in this fight. Utterly insane.

This match was all out from the start, with MK smashing a cannonball through the ropes onto Cole into the cage within the first minute. Outside action has MK throwing Cole into the cage, and Cole gaining offense, monkeyflipping MK into the steel, gettng MK back into the ring but only getting a 2 count. Cole carried on being in charge, getting another couple of near falls on MK. Cole is getting frustrated, and even spits in MK's face at one point. MK fights back and gets a couple of near pins himself. This turns into some major back and forth action with reversals, counters and more near pins for both wrestlers. Cole gains the upper hand, locking the Figure Four on MK , who managed to get to the ropes to break up the count, but has taken some damage. Cole hits a Pele, a superkick and a top rope splash on MK, but still only gets a 2 count. Cole resorts to another Figure Four, but MK makes it to the ropes again. Again MK fights back, getting a running kick on Cole for another 2, and both men are down.

Cole gets up first, superkicking MK front and back, and a fisherman suplex for another 2 count. Out of frustration, Cole lowblows MK while the referee isn't looking, and then hits a Panama Sunrise on McKinnan from the apron onto the floor!! MK was out cold and the FCP crew ran out to check up on him, with MK looking like he was not able to continue. While MK was receiving attention, Cole took the title belt from the table and demanded that it was his as McKinnan couldn’t continue. While MK was being carried out to the back, he saw Cole with his belt and managed to make his way back into the ring. Cole really went on the offensive after that, focusing on the head and neck of McKinnan, hitting TWO tombstone piledrivers on him and inflicting even more damage, but MK just wouldn't stay down. Somehow MK managed to reverse a whip into the corner, get Cole to the top rope and hit a Futurama to get some breathing space. Finally, against the odds, MK managed to hit the Shining Wizard on Cole and get the win, retaining his Title

I missed the first Project Mayhem, but had heard rave reviews about their last encounter, so I was pretty hyped up to see this match. I was not disappointed. This match was absolutely incredible!! I didn't think it would go to the full 60 minute time limit from how they went at each other from the start, but it was all action. That was by far the best match I've seen MK in. I was engrossed from beginning to end. It was a joy to watch and review.

On the whole, this was an absolutely amazing show and by far the best UK show I've seen this year, and honestly I don't think it can be beat. I really hope CZW come back next year for some more of the same.

Next Fight Club Pro show is in Wolverhampton on December 7th and will feature both the Infinity tournament and Ascension ladder match. You can check them out here:

I really recommend you come up and check them out!!