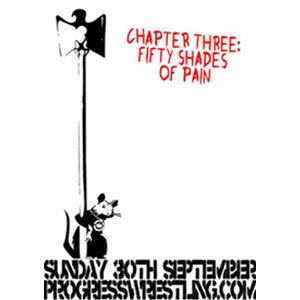 It has to be said that the computer monitor that’s positioned towards the bottom left hand corner of the hard camera is terribly distracting; that needs to go for future shows. The commentary isn’t amazing either – I know everyone doesn’t have to sound like Jim Ross, but at times you’d think he was commentating on the snooker. And you have to know the names of moves; otherwise what’s the point of you being there? He needs a co-commentator at the very least.

Noam Dar vs. Paul Robinson – Robinson is a last-minute replacement for the injured MK McKinnan. Noam Dar cuts a fairly incomprehensible promo at the start of the match; I’ve seen Scottish football managers do better work on the mike. Paul Robinson is sadly not the Paul Robinson of WBA/ Bolton fame; a legitimate hardman if there ever was one. This was a pretty enjoyable opener that did what it needed to. If you were going to nitpick you might say that Robinson’s selling of Dar’s work on his leg was spotty at best; but let’s face it, he’s not the first and won’t be the last. Dar wins via tap-out with a knee-bar on Robinson at 11.41.

Mark Andrews vs. Xander Cooper – internet research tells me that Progress feature a British Wrestling Council match on every card, and this is that. I like Cooper’s gimmick from what I saw here, and think he could probably take it a few steps further if he wanted: i.e. go down the full Bullingdon road. I saw Mark Andrews wrestle in Chikara’s YLC9 tourney, but the match was too short to form any real impression. This was an enjoyable little match that I came away from thinking I wouldn’t mind seeing more of either man in the ring. Andrews wins with a shooting star press at 8:52

London Riots vs. The Bastard Squad – with regards to the latter name, someone’s clearly been watching their Young Ones tapes. Pretty entertaining tag bout, with some nice brawling at the start; my only complaint would be that the finish came out of nowhere, with Darrell Allen getting caught coming off the top and eating a powerbomb for his troubles at 12:25 to give the Riots the win. After the match they beat up Danny Garnell for good measure.

Jon Ryan vs. Jimmy Havoc – this starts out as a ‘Strictly No Blood, No Hardcore’ match, and naturally after a few minutes it gets changed to the opposite stipulation (did that happen with the Rotten’s in ECW?) A highly enjoyable hardcore scrap, which included blood from both men, numerous bumps onto drawing pins and a powerbomb through an ironing board! (Now any commentator worth his salt would have had a line ready for that spot) Ryan gets the win a tombstone onto the drawing pins followed by a wheelbarrow German Suplex onto a barbed wire board at 14:36

R.J. Singh vs. Rob Cage – Singh is billed as being from Bollywood, India (obviously). A decent post intermission bout, which Singh wins with the Ethnic Submission at 7:27 I like Singh’s gimmick, with the entourage etc, but it probably needs a touch more nuance at some point.

Lion Kid vs. Stixx – Lion Kid beat Stixx at PROGRESS: Chapter 2 for the record. Stixx attacks Lion Kid before the bell. The commentary includes the classics line “everything Stixx does looks like it really hurts...” So much for kayfabe. It has to be said these two didn’t mesh awfully well, with a couple of blown spots. The match was OK for what it was; Stixx going over with a splash mountain bomb at 12:20

El Ligero & Nathan Cruz vs. Dave Mastiff & Greg Burridge – in a segment before the show not on the DVD, Marty Scurll is the guest referee for this one. Bear in mind Cruz defeated Scurll at Progress 2 in a 2/3 Falls match, a match in which Ligero accidentally (?) superkicked Cruz. Cruz and Ligero aren’t happy campers in this one; and towards the end Scurll refuses to count covers for either of them. It all ends up with Ligero superkicking Cruz, and Mastiff hits a cannonball in the corner on Cruz at 18:10 An intriguing main event with storyline implications for future shows.

Overall – a very watchable card; the only issue you can have really is with the production. But that aside, good stuff.

Get over to http://progresswrestling.com to order your copy