The Sun Rises in The South By Jose Haze 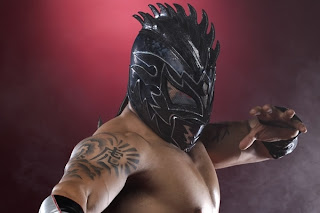 When a wrestler rises to the top turnbuckle and shoots himself into the air out onto the floor, part of the appeal is the danger. Something bad COULD happen. Many times the wrestler lands perfectly where he should, to the glowing approval of the fans, but every once in a while something goes freakishly wrong and the things go from excitingly dangerous to outright scary.

When Samuray Del Sol arrived at the Arena Lopez Mateos in Mexico for a televised independent show in 2011, he knew he needed to make the most of this opportunity. "It was my first time wrestling in Mexico. I knew there would be reps. from AAA, and the show was being covered by alot of media, so with all that I knew I had to go out and give an impressive performance" said Del Sol recently when I caught up with him.

So Del Sol went out and wrestled in an 8 man tag match that night, mid way through the match he found himself in the zone many wrestlers talk about, where everything seems to click. So as the rest of the wrestlers fought their way to the outside of the ring,Del Sol made his way up to the top turnbuckle, and launched himself in the air backwards as he attempted a 450 reverse moonsault onto the crowd of wrestlers. " I think I just got a little too excited, and a little too in the moment" said Del Sol.

What happened next could only be describes as gruesome. As Del Sol was completing the rotation on his 450, for some unforesaken reason the wrestlers on the floor moved out of the way. With only a sewer pipe coming out of the ground to break his fall, Del Sol landed head first into the concrete floor of the arena.

Immediately the impact of the accident sent shock waves through the crowd, after they figured out what happened a silence came over the rabid wrestling crowd that inhabits the Arena Lopez Mateos. Del Sol was immediately taken to a hospital. This accident had huge repercussions. He would end up staying two months in Mexico, incapacitated and lost his day job back home. With his brain swollen, and literally feeling drunk the whole time to the point that he could not get up or lay down without the help of someone. With no money, no family and in the physical and mental state he was in, it comes as no surprise that he had no plans of wrestling, ever.

Del Sol was born in Chicago, Ill. As a small child his family moved to his parents home in Mexico where he was raised for a some years. Eventually the family made their way back to Chicago. Growing up an active child, playing different sports and studying martial arts, Del Sol eventually found wrestling. Similar to many Mexican-American kids, first Lucha

Libre followed by American wrestling. At some point in his late teens, he decided he wanted to try wrestling himself.

"You know how sometimes you see something, and you just feel inside you that you can do it? That's what I felt when I was next to a ring up close for the first time".

Starting out in Chicago Indy fed. Windy City's wrestling school, Del Sol actually learned American style wrestling first. Taking part in strict and grueling work outs, Del Sol slowly learned the basics and built his cardio tolerance. At the same time, his love for wrestling grew, to the point of going against the wishes of his trainer.

"I loved being in the ring so much, that I would actually have to sneak in when I knew the trainers weren't there, which was definitely against the rules."

Within a month Del Sol had his first match where he and Indy wrestler, Isaiah Velasquez faced off against Lamar Titan and Yakuza in a parking lot.

"I was really nervous, but good nerves. In fact to this day there still isn't a match I don't get those good nerves for" said Del Sol.

Soon he was in the ring with guys like Petey Williams and Jerry Lynn. For a young wrestler these opportunities are very valuable. "Those matches helped me so much, wrestling guys like Petey and Jerry were great because they would share little things with you to improve, or if they saw you do something good they would also let you know. I'm very grateful for those opportunities so early in my career".

Eventually Del Sol met some Luchadores from Mexico and trained with them, and became enamored with Lucha Libre. He decided to make his way to Mexico to train. Having first learned American style, Del Sol first had to deprogram himself of his American training, then learn the Mexican style of Lucha Libre, which is a completely different animal.

"It was really hard, because alot of what you do in American is so different. Though a lot of stuff might look the same, trust me it was really difficult adjusting".

The man who helped him adjust was none other than Mexican Lucha Libre legend Gran Apache, the patriarch of the Apache wrestling family.

"He pushed me alot. His work outs are famous for their intensity. He was always hard on me, but very good to me".

After his accident, Del Sol eventually made his way back to the U.S. Though he had said he would never wrestle again, slowly but surely he started to get the old wrestling bug again.

" I was seeing the success some of my friends were having, like Xima Ion and decided I would try it again."

At the same time, Del Sol was not aware that the video of his accident had gone viral, and people in Mexico were asking who was this high flying kid? With the help of Steve Boz from Windy City he began to train more, all the

while getting back into wrestling shape. When he felt he was ready, he set a goal of wrestling a few matches, then if there was nothing big on the horizon he would try and get booked at the Lucha Expo in Mexico, wrestle a

match, then retire.The Lucha Expo is one of, if not the biggest Lucha event in Mexico, where all the different feds come together for an expo, and all put on wrestling shows. Del Sol was obviously looking to close out his career with a bang.

His first match back from injury was for Pittsburgh, Pa. area Indy fed. IWC. His first opponent? El Generico, arguably one of the best wrestlers in the world. Though he was in shape, Del Sol was still feeling the ills of the accident.

" Throug out the match at times I still felt dizzy" said Del Sol of the match. After a valiant effort, Del Sol finally succumbed to Generico's famous Brain buster finish.

" When he gave it to me, I legit was out for a few seconds. When I came too, I felt a bit drunk but I got passed it. Still to this day, I'll feel some dizziness but not as bad".

After wrestling a few more matches, the time finally came where Del Sol got booked at the Lucha Expo. He made the trip from Chicago to Mexico, fully content with the fact this could be his final match. Then something he did not expect to happen... well happened.

"When I landed I called home, to let them know I had made it ok" he said. "When my wife answered she told me someone from the WWE had called" said Del Sol.

While he was in the air on his trip to Mexico, representatives from the WWe had called him to see about his availability to meet with WWE at the Money in the bank, Raw and Smackdown tapings in Chicago for a try out. Del Sol obviously told them he was
available and would meet with them when he got back.

At the Expo, Del Sol came full circle, and had an amazing performance. Great enough to impress Mexican Lucha legend and former WCW star Konnan, now a key member of AAA's talent and creative teams in Mexico. Impressed him enough to get an invitation back

to AAA, for future endeavors, which he has already done present day.

After working a try out match before the Raw taping in front of WWE reps where he received some great feedback, he got a call from CZW and had some great matches for them. The rest is history as they say. Del Sol has become one of the most saught after Indy wrestlers in all of

North America, working in CZW, Dragongate USA/Evolve and locally in Chicago for AAW and Ressistance. Along the way he has become friends with the likes of Sami Callahan, AR Fox, El Generico and Chikara veteran Jigsaw, and many others. He says he has learned alot from them, but at

the same time he has been able to share some of the things he has learned along the way. At the time of this writing he is one of the headliners for one of the biggest Indy weekends of 2012, DragonGate USA's triple shot Nov. 2nd - 4th.

If that isn't enough, he has continued his relationship with AAA in Mexico, and it looks like they are very happy with Del Sol. He could not give me specifics, but says he and AAA have big plans they are set to unveil early next year.

It shows what type of a person someone is when they come back from such a difficult situation as Del Sol has. Not only did he come back, he has flourished. I asked him, looking back then, what type of impact did his accident in Mexico

have on his career? He said "It was a blessing. At the time I asked myself why? Now I know why. Everything happens for a reason. Life isn't about what happens to you, its how you deal with what happens to you that is important".
Posted by WrestleFigsUK at 08:12