Inside Out: How Corporate America Destroyed Professional Wrestling. 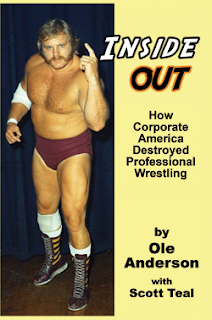 Mr. Anderson says he is an asshole. He obviously hasn't met Ole Anderson, the real asshole of professional wrestling. Don't believe me? Ask Ole he will tell you in this that he is an asshole. Ole Anderson won a total of 56 championships in his career; 49 of these were as a tag team with a variety of well known names of the old school, he would have more reigns with Gene Anderson then anyone else though. He also won several singles titles including: AWA [American Wrestling Association] Midwest Heavyweight Belt once, NWA [National Wrestling Alliance) Georgia Television Title twice, and NWA Southeastern Heavyweight Championship once. Along with a successful in ring career across mainly Georgia and the Carolinas, Ole was also a very successful booker for the same two promotions.

Where to start? This book is simply one of the more enjoyable reads under the category that is wrestling autobiographies. Ole Anderson tells his story with a dry humour through-out, covering a period of time that spans 25 + plus years in the business. As you would expect he starts with his childhood and the troubles he went through with other kids in his neighbourhood which lead to him becoming an amateur wrestler and eventually a professional wrestler in 1967. The training and the relationship that he would go on to develop with Verne Gagne in the beginnings of his career during his tenure in AWA. After a few brief stops in other territories Ole would find a place he could pretty much call his home for the remainder of his life, Georgia. When you reach his time in Georgia and the Carolinas (Georgia Championship Wrestling, later World Championship Wrestling the original version and Jim Crockett Promotions) it does get harder to keep track of what period of time Anderson is speaking of as he jumps all over the place with his stories. This isn't a major issues as he address why this happens in the opening of Inside Out. He shares his opinion and thoughts on everyone and anyone he came through these two promotions and also on other promoters he had dealings with. There are moments of shock, hilarity, and action, he seemingly manages to write up on every subject you could possibly want inside a wrestling autobiography. By no means is this anything other than Ole Anderson's book, he makes it clear that anything he comments on is his opinion and nothing can sway him on that. You hear of stabbings, fights between wrestlers, his attitude toward booking, firing and hiring people... Basically, not only are you reading one of the most enjoyable autobiographies written, you are also getting to study Ole's philosophy on how wrestling worked in the territory days and what is wrong with modern wrestling. He reveals his dealings with such stars as Stan Hansen, Ric Flair, Dusty Rhodes, Randy Savage, Bret Hart, Paul Heyman, Steve Austin, the buy-out of GCW by Vince McMahon Jr. and court dates with him, the list goes on and there is no holding Ole back friend or foe he tells it how it is, in his opinion. Going right up until the early 90's and his final years in the business under Eric Bischoff at WCW going on to finish the book with his thoughts on the current product.

Scott Teal and Ole Anderson have put together a wonderfully crafted story of Ole's life in this book. For anyone who reads this book I foresee only three possible outcomes... A) They love it and Ole is God. B) They enjoy it and think Ole is full of shit. C) They enjoy it and garner a new found respect for Ole's opinions based on his reasoning and honesty. Which ever outcome it is, it's a win-win situation, Ole gets paid for his book and the reader has a good time reading it. If nothing else, Inside Out will make you think about how the business works internally. If you haven't read this yet, read it. Then recommend this to absolutely anyone who has had an interest in wrestling from the 1960's up until the late 90's.


By Jimmy Wheeler
Posted by WrestleFigsUK at 13:22