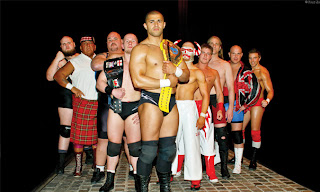 Has it been that long? How frightfully rude of me. Let's begin.

This one, I feel, might split opinion. But it's something that has really bugged me more and more over the last few years. The system in how a promoter/booker promotes/books a show has seemingly been reinvented in recent years, and not for the better in my books. I made a point out of splitting the difference between promoter and booker in the last sentence for a very good reason, one I will cover at a later date.

A simple question to begin with. Hands up, no shouting out: What is the biggest wrestling company in the UK? Preston City Wrestling? Southside Wrestling? Revolution Pro? Good tries, but not right. Alex Shane's FWA? Someone's a bit behind the times. Whatever it is Andy Hogg “promotes”? See me after class young man! If you answer anything other then All Star Wrestling, then I'm sorry to say you need to be returning to the drawing board and have another think.

Note, before we began, that I said biggest. Not best. Best is opinion based. But considering pro wrestling is a business, in the same way that WWE is the best because it has the biggest market share, All Star is the best when it comes to UK wrestling for the very same reason.

Although most will agree that they may never return to the glory days of yesteryear, when it comes to bums on seats, it's the biggest without a shadow of doubt. Specially during the summer months. Those old Regal/Finlay stories of 21 shows a week are still happening every year. For the very few good enough to keep up with the demand, “the holiday camps” are the perfect way to learn the dying art of true British Wrestling from the masters of it. If you want to make it past weekend warrior and into a full time professional wrestling, All Star should be your aim. Worked for the likes of William Regal, Fit Finley, Dave Taylor, Robbie Brookside, Sheamus, Wade Barrett to name just a few. It's the same reason why “them yanks”, or at least the good ones, love to come over here to learn the craft. Send them over here, teach them to actually work, send them back. It's been happening for years, from all over the world. From Owen Hart to Jushin “Thunder” Liger. You are not a true Daniel Bryan fan until you've seen him in a Hogan like “Mr America” mask, waving the stars and stripes as he sings The American Anthem to a crowd of middle class Butlins campers. It's a match with the criminally underrated Dean Allmark, find it on Youtube, thank me later.

My point, if not somewhat long winded, is that All Star is still the makkah for real British Wrestling. All Stars successful choke hold on British Wrestling, for over 40 years now, has never loosened it's grip for one reason alone. It's always been ran as a business. I know the term “British Wrestling” and “Business” don't tend to share a sentence, so I'll let that sink in for a second. We good? Wonderful.

Now, admittedly, as All Star will only promote one show in each town every 6-9 months or so, the formula for booking a show to a company running the same venue every 4-6 week will of course differ. But this is an issue we will tackle when we get to, most likely it in my next pet peeve.

Wrestling is theatre, dare I say panto. Never forget that. And in every form of theatre, you should leave the audience wanting more. The underlining rule most newer promoters have that “more is better” is simply not true. This is where the 5 match card structure, employed by All Star, is, in my opinion, the best way to book an event. 10 wrestlers (12 if you want a tag match), 1/2 referees, 1 MC. Sorted. If structured properly, the crowd will leave feeling both satisfied that they saw enough to justify the ticket price and still wanting to come back to see more next time. It's been a long time since I last went to a show, as a fan, and left with this feeling. In 99 out of 100 cases, less is more.

I don't need 7/8 matches to have an entertaining night at the wrestling. In most cases those extra few matches actually ruin the evening. Like the one/two pint too many that turns a fun night out with your mates into “that night you shat your pants outside the club chatting up fit blonde and then got arrested for trying to dropkick a police horse in the face”. Although that sounds somewhat exciting, it's needless and ruins what would have otherwise been an excited evening of drunken goodness. And if the aforementioned “fit blonde” still wants to go home with you after all that, it can safely be assumed that beer goggles wherein full effect anyways. As I write this, I'm tempted to sack it in for a few hours, jump on a bus and finally go see Skyfall, the new James Bond film. As a big fan of all things Bond, I'm annoyed at myself I'm somehow still yet to see it. The ticket price is going to be more then I'd like to pay to see a film, but I don't mind for what is being presented to me. Saying this, if, lets say, for the £7 it will cost me to go see the film, I was also made to sit through a classic Bond film before the film, however entertaining that would, but the time Skyfall was to come on, I might just be all 007'ed out.

I won't name companies, but there are so many newer promoters companies, of many sizes, that feel the need to promote these overbooked cards for, well, seemingly, no reason. Having the very best talent on your shows is paramount, but that doesn't mean one must have every single talent of a certain skill level or above booked. I don't know if it's, sometimes, an issue of trying to “get in with the boys” by booking as many as humanly possible so they might like you. I don't know if it's that promoters see what other companies are doing and feel the need to do the same, out of fear of cheating there customers out of value for money. What ever the reason, it's great for some younger talent who, otherwise, they may not get the same chances to showcase there craft. But as a fan, it's often too much for me to handle. After seeing two huge 20 minute “UK dream matches”, with 6 false finishes a piece, an 4 team elimination tag match and a meaninglessly gimmicked grudge match, with 3 needless run in's, I'd rather go home and have a cuppa then sit through the “15 minute intermission”, which always ends up being more like half an hour as the failed attempt to sell as many DVD's of the last show as possible continues, watch another two high paced, overly flippy, needlessly complicated, matches (one being a tag match, because 4 teams where clearly not enough for one show) we get to the main event, as the former WWE Smackdown lower/mid carder phones it in against the current champion for 40 minutes (well it as the main event after all) before being screwed out the title by the heel champion, crowd are as pissed as they can be arsed to be by 11pm, and the baby face import hit's his finisher to lay out the champion to send the crowd home happy. The show is as needlessly as long and over complicated as my last sentence was. At least I broke it up a bit and gave you moments to take a break when needed. More then most of these shows do.

The sad thing is, I know there are a lot of people that love these kind of shows. There must be, or they would stop coming back time and time again. And if it works for them, then wonderful. I'm happy they are being entertained. But it doesn't work for Adam James Bullivant any more. I was delighted to hear that Fight Club Pro recently ran a show with a 4 match card. As a very import heavy company, by design, it makes much more sense to give these special attraction wrestlers longer matches to show really off all their talent and “get there shit in”. But my limiting the number of matches on the card, they can do that without needlessly burning out their crowd. From the reviews of that show, I can safely assume no one left that show feeling short changed.

The need to have stupidly over booked shows, with too many matches/gimmicks/wrestlers, I fear, is yet another skid mark 1PW left on the tighty whiteys of British Wrestling. Sadly, I think this one won't be coming off in the wash any time soon.

Adam James Bullivant can be found at:
Twitter: TME_AJB (for banter)
Tout: /adamjamesbullivant (for pointless videos)
Facebook: /adam.james.bullivant (For reffing/design work)
Posted by WrestleFigsUK at 20:45