Ten Years Ago: Vince Owns the World By Kevin Kelly 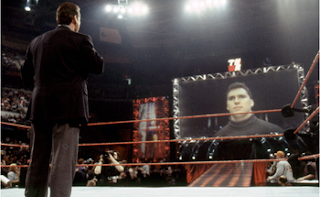 I’ll never forget the smug, satisfied look on the face of Vince McMahon when he told us he’d bought WCW. We were gathered at Cleveland’s Gund Arena (now renamed the “DieLebronatorium” or something) in the usual spot for the production meeting… if you’ve been in one cold, gray room, they all look alike, you know?

Anyway, Vince led with “well, you’ll hear it later today but I want to officially tell everyone that we bought WCW.” For a second, we thought it was a rib. The slightest burst of laughter that even Vince chucked at. He sat back in his chair a little and smirked that smirky smirk. He told us he bought everything for two million dollars.

We all do the same thing... when we find a great bargain, we’ll tell anyone that will listen how much we paid for it… makes us look smart. Vince was smart here but more than that, this was about how stupid those in charge of WCW were. Vince got over on them and he knew it.

Seriously, we should start a neighborhood watch program because if Russo or any of them show up around future wrestling shows, someone should blow a rape whistle.

But back to history… there was a collective pep in everyone’s step that day. While high hopes turned into disappointment in the wake of the failed Invasion, the WCW library was the real treasure here. I enjoyed my role in starting the inventory process on the tape collection and am happy that fans can relive moments like the Nitro in 1997 when my pal, Maverick Wild, made Jacqueline Moore look like ten zillion bucks.

So, where were you when the Wrestling War ended? Twitter thoughts @realkevinkelly 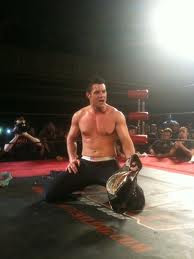 This past Saturday, a brief stroll was the distance between Ring of Honor and the WWE, while a short subway ride separated Ring of Honor from the UFC. Jon Jones and Eddie Edwards both attained championship glory and could have met at a diner on Route 3 together to celebrate.

Two new champions crowned this Saturday will be linked forever.

Have you heard the reaction when Eddie Edwards defeated Roderick Strong to become the new ROH World Champion? Click here! One of the biggest reactions I can remember… As great as Roddy was as champion, Eddie’s victory shows just how tough and deep the field of ROH World Champion contenders really is. This is now Eddie’s reality. You wanted to be champ, kiddo? Good luck!

Same goes for “Bones” who wins the title in the deepest division in MMA… 205 features Rashard Evans, “Rampage” Jackson, Lyoto Machida and more… watch out for a rematch with Ryan Bader as well. Celebrate now, Jon but don’t dwell on your moment for too long.

Eddie has to get right to work, defending the World Championship on April 1st against Christopher Daniels in Atlanta on iPPV at “Honor Takes Center Stage” and then the following night, Edwards reunites with American Wolf partner Davey Richards against Wrestling’s Greatest Tag Team.

Just like Jon Jones, Eddie Edwards must know the hard work lies ahead of this past weekend’s achievements.

Jones is just 23 and the praised heaped on him is enormous. Edwards also in his mid-20’s and everyone always said “man, Eddie Edwards has talent!”

But did anyone really think Eddie Edwards would be the first American Wolf to win the ROH World Championship? While other grabbed headlines, Eddie kept getting better and better and better. From tag team champ to the first Television Champion to now ROH World Championship, the progression from goal line to goal line now has Edwards rightfully called the best wrestler in the world.

As Bones is being hailed as the Michael Jordan of UFC, Eddie Edwards will now have to continue to do what he does best and that’s work hard in hopes of making the dream of becoming World Champion last as long as he hopes. 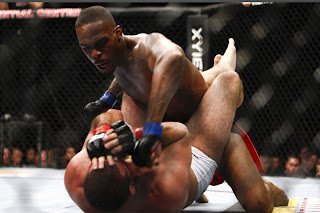 WLH would like to thank Kevin Kelly & Wrestlezone.com for providing this article
Posted by WrestleFigsUK at 14:46