Looking Back at Wrestlemania - Part Three With Shaun Nichols

Wrestlemania IX - Right up there as one of the worst Wrestlemania shows of all time, came from Caesars Palace in Las Vegas and was an open air event. The show also for some bizarre reasons had a Roman theme. Among the rare goodpoints of the show, Jim Ross made his commentary debut for the WWF, Bobby Heenan arrived at ringside facing the wrong way sitting on a camel. The Steiner Brothers defeated the Headshrinkers in the match of the night which was probably in the range of ***1/2. The only other passable match was Shawn Michaels' I-C title defence against the Tatanka which ended in a unsatisfactory count out. In the main event Yokozuna bested Bret Hart in a terrible main event, which was made even worse when seconds later Hulk Hogan turned up and pinned Yokozuna in 21 seconds to become the new WWF champion. There was supposed to be a feud between Hogan and Hart in the summer of 1993 over the title which Hogan nixed saying Bret wasn't on his level, instead he dropped the belt back to Yokozuna at the King of the Ring PPV that June and finally re-surfaced in WCW the following year. In other delights Razor Ramon defeated Bob Backlund, Money Inc defeated Hogan & Beefcake by DQ in a tag title affair, the popular Crush had his push completely pulled as he lost to Doink. This show was also where Lex Luger made his WWF PPV debut against Mr Perfect it wasn't good. This is a very poor show. 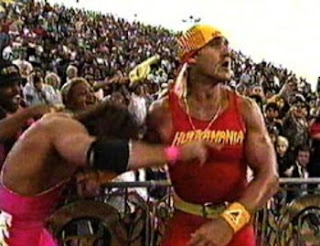 Wrestlemania X - Back to Madison Square Garden, this featured two of the best Wrestlemania matches of all-time. Opening up the show was Bret Hart facing his younger brother Owen, who had turned on him at the Royal Rumble saying that Bret was too selfish. There were suggestions that it should have been Bruce rather than Owen who should have had that spot. History shows that Owen was the right call. This was a fantastic match with lots of reversals, good psychology and Jerry Lawler doing a great job on commentary. Owen won clean and became a main eventer for most of 1994. The other classic was the I-C title Ladder match between Shawn Michaels and Razor Ramon, due to the type of match it is this doesn't stand up to the test of time like Bret-Owen match but was very innovative and comes across as something very different. Even if you watch it now and see Shawn tying himself in the ropes at the end. The were two WWF title matches on the show as first Yokozuna defeated Lex Luger by DQ half way through the show and then in the main event Bret Hart bested Yokozuna when he capitalised on Yokozuna falling over in a match refereed by Roddy Piper. In other matches, Randy Savage was victorious over Crush in a falls count anywhere match when Crush had to pretend that he couldn't get up. Personally I wouldn't trust Randy's knot tying skills. Earthquake defeated Adam Bomb in 32 seconds, the Quebecers lost by count out but kept their tag titles against Men on a Mission. 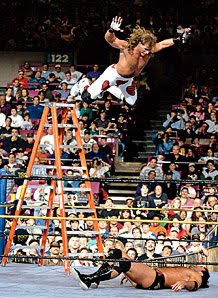 Wrestlemania XI - Another dubious show, this was headlined by NFL legend Lawrence Taylor defeating Bam Bam Bigelow. Why the WWF thought that this should be the main event is anyone's guess? The WWF title was defended by Diesel who was successful against Shawn Michaels in a match which featured Pamela Anderson and Jenni McCarthy in the respective corners. In the run up to the show Shawn had claimed that this would be the best match of all time and so their match had quite the high expectations. Sadly they didn't meet them. Bret Hart was victorious in I Quit match against Bob Backlund using the chicken wing in a match refereed by Roddy Piper. Owen Hart and Yokozuna won the tag titles against the Smoking Gunns, and Jeff Jarrett retained his I-C title against Razor Ramon although he lost by DQ. 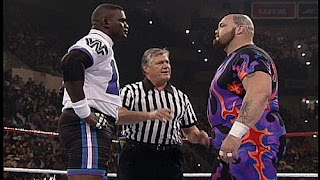 Wrestlemania XII - This featured the sixty minute iron man match between Bret Hart and Shawn Michaels for the WWF title. I'll say right up front that I think both guys were very good wrestlers and had some fantastic matches between them however this was dull and boring in long parts. It could and should have been much better especially if they could have traded the odd pinfall. Instead they told the story that they cancelled one another out, it was a big mistake. After the 60 minutes, Bret walked to the back, a number of fans had already started to leave. By the time Bret had been called back and caught with a superkick for the title loss, it meant that Shawn was celebrating in a 2/3rds full arena. In other matches the Undertaker defeated Diesel in the semi-main event, Steve Austin made his Wrestlemania using the 'Ringmaster' gimmick beating Savio Vega, Roddy Piper having a year off from being a referee got the win over Goldust in parking lot brawl which featured a parody of the OJ Simpson car chase. Triple H had an interesting introduction to Wrestlemania he was pinned in 96 seconds by the Ultimate Warrior. 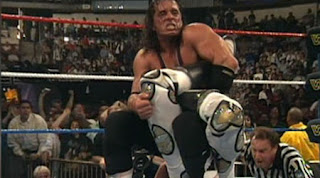 Wrestlemania XIII - One of the better Wrestlemania cards, this features the classic Bret Hart vs, Steve Austin 'I Quit' match which saw the faultless double turn, which left Austin as arguably the biggest babyface and allowed Hart to turn heel and run with his anti-USA gimmick. For the record it was Bret that won, when guest referee Ken Shamrock concluded that Austin couldn't continue. The Undertaker defeated 'Sycho' Sid in the WWF title match in the main event, this was exactly what you would expect. Rocky Maivia won his first I-C title by besting The Sultan in a poor encounter, this was at a time when the future Rock should not have pushed down the fans throats. Owen and Davey Boy fought to a double count out in their tag title match against the unique team of Vader and Mankind, Legion of Doom & Ahmed Johnson (do you remember him?) defeted the Nation of Domination in a decent Chicago streetfight. Triple H had his first Wrestlemania victory when he used the pedigree to beat Goldust on the undercard. 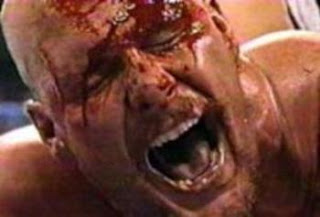