Looking Back at Wrestlemania - Part Four With Shaun Nichols 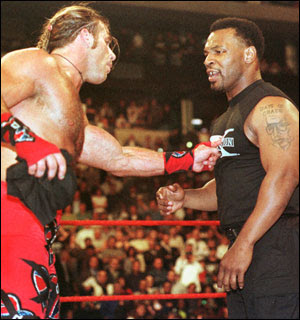 Wrestlemania XIV - Or the one with Mike Tyson if you'd prefer. The main event was Shawn Michaels with his legendary bad back defending the WWF title against Steve Austin, it's often been said that the Undertaker had to convince Shawn that it was the right thing for business to put the title on Austin. Mike Tyson himself acted as a special enforcer at ringside but turned on Shawn after the match by dropping him with a right hand. The Undertaker himself was in action beating Kane in the semi-main event, in other matches The Rock still with the Nation of Domination at this point hung onto the I-C title in a decent encounter with Ken Shamrock. LOD 2000 (Legion of Doom repackaged and now managed by Sunny) won a pointless 15 tag team battle royale to open the show. Terry Funk won his only WWF title belt in his persona of Chainsaw Charlie alongside Cactus Jack claimed tag team gold by defeating the New Age Outlaws in a dumpster match. In a rare highpoint for DX, Triple H retained the European title against Owen Hart on the undercard. 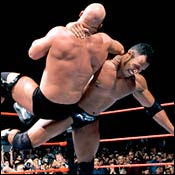 Wrestlemania XV - The main event was The Rock defending the WWF title against Steve Austin in a No DQ match which towards the end featured run-ins from both Mankind and Vince McMahon, however Austin would not be denied and finally stunned his way to a second consecutive Wrestlemania main event win. The Undertaker featured in the semi final position again beating the Big Bossman in the worst Hell in a Cell match of all time. Shane McMahon's European title defence against X-Pac also was graced by a number of uninvited guests. The Road Dogg successfully defended the I-C title in a four way match which included Val Venis, Goldust and Ken Shamrock. Owen Hart and Jeff Jarrett were also victorious champions defending the tag titles against Test & D'Lo Brown. And finally to prove that the 'Brawl for All' was a complete disaster, the winner Bart Gunn found himself knocked out by journey man boxer Butterbean in less than 20 seconds. 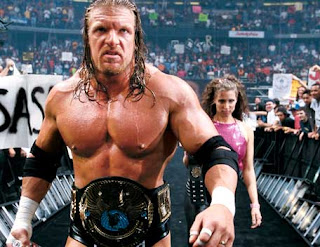 Wrestlemania XVI - Had a Four Way as the main event, with every wrestler supported by a different McMahon, WWF Champion Triple H (Stephanie) vs The Rock (Vince), vs Mick Foley (Linda) vs Big Show (Shane). Mick Foley had supposedly been retired by Triple H at the previous PPV, this was also the first Wrestlemania where a heel won the main event when Triple H outlasted his rivals when Vince decided to double-cross The Rock and cost him the title. The 2000 version of Wrestlemania also saw the three way TLC classic between the Hardys vs Dudleys vs Edge & Christian who became the new tag team champions. Also in three-way competition were Chris Benoit, Chris Jericho and Kurt Angle who fought over two falls to decide who would be I-C and European champion. Benoit left with I-C gold and Jericho the European title. The other new additions from WCW, Eddie Guerrero, Perry Saturn & Dean Malenko had a less successful start to their Wrestlemania careers when they lost a six man to Too Cool & Chyna, what were the bookers thinking? 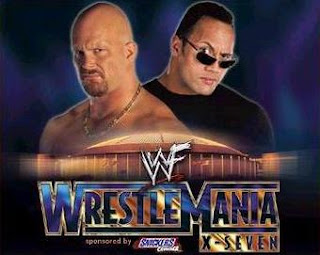 Wrestlemania X7 - Was basically a re-run of the main event of Wrestlemania XV where once again Steve Austin defeated The Rock for the WWF title in 'No DQ' main event with the only difference being that this time Steve Austion formed an alliance with Mr McMahon and turned heel. This wouldn't be the best idea the WWF ever had. In the semi main event the Undertaker was back on duty facing Triple H in a decent encounter. Strangely the WWE are re-writing their history by implying that The Undertaker and Triple H have never met at Wrestlemania and all talk of their initial Wrestlemania match have been banned for this years show. On the undercard Edge & Christian made it two TLC victories in a row over the Hardys and Dudleys, it didn't reach the heights of the previous years card. In a soap opera moment Shane defeated Vince which featured Mick Foley as referee and appearances from Linda, Stephanie and Trish Stratus. Chris Jericho successfully defended the I-C title against William Regal, Eddie Guerrero retained the European title against Test, while Kurt Angle used more intensity rather than integrity to defeat Chris Benoit.
Posted by WrestleFigsUK at 22:15