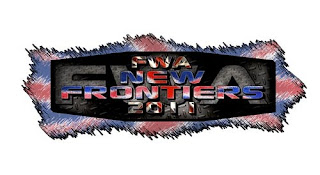 I attended both of the FWA shows on the 26th and 27th of March which was part of the Memorabilia shows at the Birmingham NEC… day one was reviewed by Stuart so I thought I would review day two.
The format annoyed me. There would be one match every 90 minutes so people could have a look at the other exhibits but I was only there for the wrestling so I got a little bored between matches. Also only one match was announced so I didn’t know what to expect.
The first match was part of the Adrenaline Division which was Shane Oldham vs ‘Textbook’ Dave Breaks. Dave played the cocky heel and played to the crowd really well and he is a fantastic wrestler with a bright future. Oldham didn’t get enough offense in I felt but he picked up the win nonetheless in an entertaining match.
Then ‘Showstealer’ Nathan Cruz came out whilst the ring announcer was talking and demanded to face El Ligero. This prompted RJ Singh to appear and after a short back-and-forth El Ligero came to the ring to face Cruz whilst Singh stayed Ringside. The finish came when Ligero had Cruz pinned after the C4L (tornado DDT) and Singh pulled the ref out of the ring. Ligero did an awesome looking tope-con-Hilo but was eventually got counted out.
Following yet another break it was time for the final match in the Flyweight tournament which saw ‘Wonderkid’ Jonny Storm against ‘Rockstar’ Spud. I was really looking forward to this match. Jonny said before the match that this was going to be a fight. And that was what we got. The match went outside the ring at many points and at one point Spud was thrown into the guard rail which hit a senior citizen and I presume her grandchild. Then there was a poorly timed ref bump and then a few minutes later they jumped the guardrail where Jonny eventually hit Spud with a bin…yes a bin… But all of a sudden the ref came to and there was a Double DQ. Terrible. This was then followed by a pull apart brawl.
And finally we come to the main event. We saw ever the enthusiastic Nick Riley come out. We then heard the Agenda consisting of Goliath, David Deville and Alex Shane make come to the ring. Alex cut a great promo which (like the previous day) went over the heads of the audience. This promo was also great as Alex was losing his voice and it seemed to work well. Alex handpicked David Deville to ‘take out’ Riley. Long story short, Riley got destroyed. Before, after and during the match. Before the match Goliath and Shane hit a big boot and a Chokeslam (respectively) on Riley. This led to David Deville having 95% of offense in this match and just when Riley was getting some offense in, Shane got involved. Then Deville picked up the win and then proceeded to destroy Riley afterwards. Shane then picked up the mic again saying that Step 1 is complete and before he could fully explain Step 2 Jonny Phere from XWA came in from the crowd, prompting Alex and David to run away. Phere then had his way with the ring crew before cutting a promo to close the show.
I have to say this was a disappointing show. 4 matches, one clean finish, a DQ, a count-out and various interferences. That being said I Know I’ll end up buying the DVD.