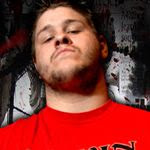 All the talk in the wrestling world has been about CM Punk, work or shoot, will he return to the WWE or not, I think it's pretty clear that it's a work and if he has short term deal or signed a normal 3-5 year deal I think it's pretty easy to say he is under some sort of deal. On the independent circuit, there is a Canadian worker named Kevin Steen who was a Ring of Honor mainstay from 2007 until 2010. He lost a career vs. mask match to his former partner El Generico at ROH Final Battle 2010 but behind the curtain, Steen's ROH contract had expired due to financial budget concerns on November 4th to be exact and with that was gone from the promotion.

Steen continued to work on the independent scene and he had a notable run in PWG's DDT4 tournament with Akira Tozawa beating first The Briscoe Brothers then the Kings of Wrestling who were the ROH tag team champions at the time. Steen & Tozawa who were calling themselves Nightmare Violence Connection made it to the finals of DDT4 but were defeated by The Young Bucks.

On June 26th 2011, ROH had an iPPV called Best in The World 2011 and in the weeks leading up to the iPPV, ROH veteran Steve Corino as well as Jimmy Jacobs were saying how they wanted to be forgiven for past discressions in ROH and they were accepted back into the fold by the ROH fans and rumours were abound that Corino wanted Steen to be given a second chance by ROH and he would actually turn up at the iPPV. The night went on and then it was time for Corino's match with Michael Elgin, Corino had Jacobs in his corner and Elgin was accompanied by Truth Martini. Corino got on the mic and gave a speech about giving people second chances which led to him calling Steen out who then came through the crowd but he was cut off at the guard rails by ROH officials. Corino had his match with Elgin and at the end of the match out came Steen again, this time he did make it to the ring, where he cleaned house which included taking Martini out with a great superkick. Jim Cornette and the ROH officials came out again but Corino got on the mic again and got the crowd to chant "let Kevin speak" and Cornette did. He spoke in a soft voice pandering to the crowd but then just screamed "Fuck Ring of Honor" and then blindsided Jacobs and then Corino and he hit him with a package piledriver and he was smirking as he was carried out through the crowd while flipping the bird to the fans. This was a HOT topic at the time and even after the excellent main event of Davey Richard winning the ROH World Title from his American Wolves partner Eddie Edwards all the talk afterwards was about Steen.

In the days and weeks following Best in The World Steen has been getting his name out there, and shortly after the iPPV Steen released an 'open letter' and this is below -

"The second I heard it, I got a feeling in the pit of my stomach that I will never forget.

So many things went through my mind...how could I end up in this situation? What can I do to fix it? Is it too late to change things? And most of all...how could I live without Ring Of Honor?

I heard the sound that signified my career in ROH was over and my heart sank. Actually, it felt more like it started bleeding.

You have all figured out by now that the sound I'm talking about is the referee coutning to 3 as Generico is pinning me for the victory at Final Battle. But many people thought that feeling in the pit of my stomach was regret...but as I showed everyone at the iPPV, it wasn't.

I spent 6 long months trying to get rid of that feeling...the feeling of undeniable rage and betrayal that festered inside of me ever since that phone call. Remember that call Jimmy? The one where you told me back in October that if Generico and I didn't stop this war immediately, one of us would have to go? I told you there was no way you'd have the guts to get rid of one of us and the next week, I decided to call your bluff and lay out the challenge for Final Battle.

I expected you to lose your fudging mind after I did it and I was right. You did. What I wasn't right about is the fact that you'd beg me to reconsider. I'll admit it, on that one, I was way off. I realized pretty quickly that you weren't going to be manipulated like everyone else I dealt with. You made the match official and it got quite clear quite quickly who you and every other ROH ''official'' were rooting for.

The match was 2 months away and I could already see all of you plan for ROH without Kevin Steen. It made me sick. I knew there was no way I could win this thing. Regardless of how the match went you'd just screw me over if you had to. You couldn't have me running around beating the crap out of everyone and licking people's blood when you were negociating with that nice big corporation that wanted to buy the company, which would ensure that the almighty Jim Cornette would always have a job in ROH and still matter in the wrestling world.

I really tried to let go of that anger but nothing I did helped. The closest thing to relief was when I got to compete in a PWG ring. But even that was bittersweet because after every match, people would come up to me and say ''How are you not in ROH anymore?''

Then I saw what they made Steve do...and that was the straw that broke the camel's back. Steve Corino is the best. My idol. He is an exemple for everyone that wants to leave a mark on this industry. He's one of the guys I watched as an aspiring wrestler that made me say ''I want to be like that guy!''

Of course, that was before he sold his soul for that company. That was before Steve Corino made the decision to cut his own balls off so that he could stay in ROH.

Steve Corino is a fudging legend and instead of embracing that, he turned himself into a apologetic, self-deprecating, pathetic shell of what he really is.

I don't know whether he genuinely believes this crap or whether he's doing it to kiss ROH's ass but I'll say this, fudge him for demeaning himself and fudge ROH for either LETTING him or FORCING him to do it! And as far as Jimmy Jacobs is concerned, I don't know him as well as I know Steve but it seems to me he got brainwashed into ripping his own balls off too. The unfortunate part is Steve made the mistake of thinking that he could change me as well. I actually can't believe that possibility even occured to him. Maybe Jacobs put that in his head?

All I know is this: Steve, you need to understand that I don't hate you. It's quite the opposite. You are still my idol. I still respect you more than anyone I've ever met in the wrestling business. I still think of you and Colby as family.

But I will never castrate myself in order to make ROH, Cary Silkin, Jim Cornette or you, happy. I am the monster I am and I will never change. My name is Kevin Steen and I am the Antichrist of pro wrestling. I don't need to drink or do drugs to be who I am. I am here to beat the fudge out of people and create as much chaos, pain and mayhem as I can and that's always going to be my purpose.

I waited for 6 months to get a chance to come out, stand in the middle of an ROH ring and scream to the world what I've been feeling and I finally got to do it at Best In The World. But I didn't do it just for me. I did it for a lot of people. I did it for the guys that gave years of their careers to ROH and got discared with no explanation like Necro Butcher, Austin Aries and Jimmy Rave. I did it for Gabe Sapolsky. I did it for my buddy Adam Pearce who poured his soul into that company before being thrown out like garbage. But most of all I did for myself, my wife and son, and for the old Steve Corino... the one that died in December when I got kicked out of the company.

There's so much more I want to write about here but I feel this has been long enough already so let me close this off with one last thing.

I will show up in ROH again, sooner or later. And when I do, it'll be with one goal in mind...

To bring the whole fudging company down, for good.

Recently it was announced about his open mic opportunity on the EVOLVE 9 show which airs this Tuesday coming on iPPV (look on the right side of the page to see ordering details). And he then ask for someone on the ROH forums to let him post some comments which I posted earlier but it is here again, just click on the picture so you can read it - 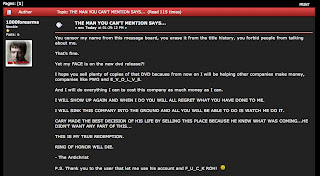 And then this past Saturday, on PWG's 'Eight' show, Steen beat PAC in a singles match and then teamed with CIMA to beat The Young Guns and then after PWG champion Claudio Castignoli beat Chris Hero, Steen challenged him to a title match which he accepted and Steen once again won the PWG title.

This story has the indy fans wondering as much as they were wondering about CM Punk when his did his 'shoot' promo but unlike that story, we really don't know what's going on with Steen, but I am really looking forward to seeing how this develops.