Can The Kings Succeed in The WWE? 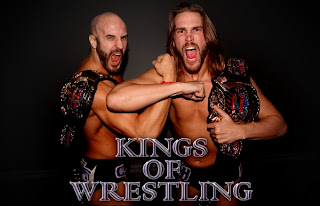 At the time of this writing, one of the rumors floating around the Internet, is that the WWE are signing The Kings Of Wrestling. Not only are Chris Hero and Claudio Castagnoli are about to fulfill their wrestling dreams of joining the number one company in the world, they even get the respect of the corporate office in being allowed to skip developmental and heading straight to the main roster. Now on the surface this is a great move for both side. The Kings will be allowed to perform in front of millions and millions of people and make a considerable amount of money. The WWE gets two young stud performers who are not only great in-ring workers but also solid on the microphone. But will this marriage bloom into something beautiful or will it turn into yet another example of wasted potential.

The Kings of Wrestling are arguably the best tag team in the world today. They have "graduated" so to speak from Ring of Honor and are now ready to shine on a national stage. Their tag team work over the last couple years is exemplary. They have made young tag teams such as The All Night Express and the Adam Cole/Kyle O'Reilly tandem and made them look good. They have had epic battles with Jay and Mark Briscoe and now The World's Greatest Tag Team. Shelton Benjamin and Charlie Haas. They have conquered tag team wrestling in Ring of Honor and have almost looked bored over the last few months. The time is right for the KoW to move onto to bigger and brighter lands.

But is the WWE the right landing spot for The Kings. The WWE haven't had a strong tag team division since the days of The Hardy's, The Dudley's, Edge and Christian, and The APA. That's almost 10 years ago. We have been forced to suffer through make shift tandems and random pairings of guys who couldn't get over as singles performers over that time. WWE has used tag team wrestling to try and make new stars out of guys. We have seen them do this with The Miz and John Morrison. Teams that do come in as pairs seem to get a one year shelf life, then the company breaks them up. We saw this with Deuce and Domino, then later Cryme Tyme and most recently, The Hart Dynasty. Right now, there is only one pure tag team on the roster and that is The Uso Brothers. So when you look at this history, things don't bode well for The Kings.

But this is a new WWE, well at least they want us to think that. We see a WWE that seems to be catering to the Internet fans more and more. We see CM Punk becoming a legend, not just a superstar. We now have Daniel Bryan in the World Title hunt. We see Zach Ryder getting TV time on Raw and soon to be the face of Smackdown, along with the New World Champion, Christian. This is the dawning of a new era in WWE and maybe, hopefully, we can see tag team wrestling come back to the forefront of the shows. I think we would all love to see The Kings become the foundation for a rebirth of tag team wrestling in WWE. When you open up a division and look for new talent, you can bring in guys who normally would never fit into your storyline. Think of what TNA is doing now with rebuilding their X-Division. We are seeing guys like Austin Aries and Kid Kash get a chance to rebuild themselves ina division that was just featured with their own PPV. Could we see WWE go after other ROH tandems or a team like the Young Bucks, who remind a lot of wrestling fans of a young Hardy Boyz. Could we see the WWE put the Hart Dynasty back together as both Tyson Kidd and David Hart Smith struggle since their split. Not only will the Kings of Wrestling help build this division but it will also help push any of the current guys on the roster. The Usos will be allowed to showcase their tremendous teamwork and the current champs, McGillicutty and Otunga, will have the step their games up and quit resting on their names alone. A year from now I hope we are all looking back and marveling at how great the tag team division in the WWE became and not chastising them for once again wasting talent and letting it rest at the bottom of the roster. I tip my beer to The Kings of Wrestling and wish them the best. Heres your opportunity. Take the ball and run with it and show the world what tag team wrestling is all about.

Follow me on twitter @captainomg.
You can also check me out on the Still Real To US podcast from time to time at wheelhouseradio.com and wrestlechat.net
Posted by WrestleFigsUK at 14:53