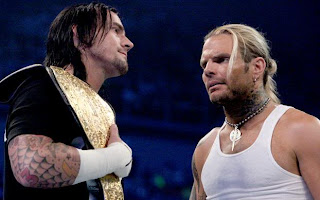 Recently I have come across a Youtube video of Jeff hardy with a bit from Matt Hardy where they are both in a drunken state, the video is not new apparently in fact it's from 2010 but it got my attention because CM Punk is in the news at the moment, no CM Punk IS the news. But I recall the feud the two had a feud back in 2009 where in reality Hardy was the star and Punk was just someone on the roster 'getting the rub'. CM Punk came out of this feud as the world heavyweight champion which ended with him defeating Hardy in a 'loser leaves WWE' match.

Many will say, Punk has won two Money In The Bank matches, been world champion twice with the second time using his MITB win to beat Hardy for the belt so in his own right, he made himself a star. The fact that the WWE powers that be chose Punk to be the only person to win a MITB match twice makes you think they saw something in him, but overall, his two runs with the strap were not the most successful.

Jeff Hardy we all know has been his own worst enemy with his battles with various demons but does he have a point at all? Did the matches he had with Punk make him a star?

It's a point worth discussing, but I expect many to say Hardy is full of sh*t. Let the debate begin.

Here is the video I spoke of.