What a Couple of Days in WWE Land 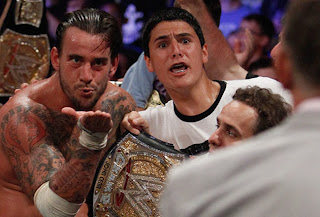 So Money in The Bank 2011 is over, all the questions have been answered as far as what would of happened at the PPV concerning CM Punk and his future. Well, as we all know now, Punk won the WWE title in Chicago and the crowd was AMAZING. In short as I guess you have seen the PPV, Vince McMahon came down with John Laurinaitis and as soon as John Cena put Punk in a submission move, he told Laurinaitis to get the bell rung, Cena hopped out the ring clocked Laurinaitis and told Vince he's not winning like that, Cena jumped back in the ring and Punk got hit with the GTS and CM Punk was the WWE champion. Punk celebrated in the ring and around ringside and then went through the crowd after blowing Vince a kiss.

I think the bigger story from the PPV for me was Daniel Bryan winning the Smack Down MITB match. Listening to the the Total Wrestling Show on Sunday they were doing predictions for the PPV, each presenter had theirs and it was open to the chatroom, no one picked Bryan but one person as far as I know sent in a text to the TWS text messaging service saying Daniel Bryan for the SD MITB match and that was myself. OK, so I picked Bryan probably because I actually wanted him to win but the MITB should be there for making stars and even though I and many more have always classed Daniel Bryan or more so Bryan Danielson as the best wrestler in the world but since his move to the WWE, he is not the wrestler we know and admire from his ROH and independent days so he needs to be made a star once again. I am glad he won MITB, I hope he gets a run with the strap but I hold no illusions, I don't expect him to be a success as a world champion much like a certain CM Punk in his his previous 2 world title runs in the WWE. 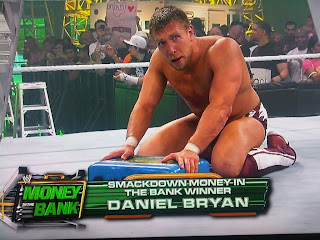 The ending of the PPV was what I thought, Punk won, took the belt and went through the crowd, annoyed me there was a camera up there where he actually left the seating area but hey, if you didn't think it was a work before that then you should do now.

Fast forward to the next night and on RAW, Punk wasn't there, which was good for storyline reasons and Vince wouldn't even announce his name. Vince said he would mention John Cena's name and he would have to pay the price for not beating Punk on the PPV. Before that, Vince said he would hold a one night, 8 man tournament to crown a new WWE champion - First round results were Miz over Riley, Kingston over RAW MITB winner Del Rio, Mysterio over Ziggler & R-Truth over Swagger, semi-final results had Mysterio over Truth & Miz over Kingston. Vince came out again, and told Mysterio that the final match would take place next week as there were bigger things to deal with so he would have to wait until next week, Mysterio pleaded but that was the final decision. Vince said then he would now have to do what is needed for business, John Cena let him and the company down and actions would need to be taken. Out came Cena and Vince rambled on, Cena rambled on and the one thing that stood out of the promo was Cena saying if it was to end tonight if he was to be fired then as he loves this, he would have to go on somebody else's TV show brother. Vince proceeded and as he was about to fire him Triple H's music played and down he came dressed to the nines. Again, in short, Triple H said he was at a board meeting where the outcome was they were taking away Vince's powers and he was taking over the general day to day running of the company. The crown sang the old yeah yeah, good bye to him and then when he began to cry they were chanting "thank you Vince" - Hilarious. 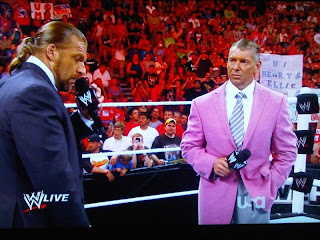 The PPV is getting rave reviews and maybe it's deserved, RAW however is being slammed and the latter I agree with, why? Because I don't want to see The Miz or Mysterio as WWE champion but I think next week we won't see that match, here's hoping fans, here's hoping.

That's it for now, hit me up on twitter @WLHSTU or email me at wlhstu@aol.co.uk
Posted by WrestleFigsUK at 03:36