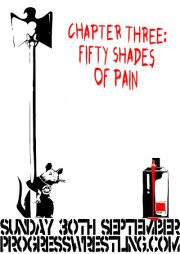 PROGRESS Wrestling bring Chapter 3 '50 Shades of Pain' this coming sunday, so in the 4th preview of the day, here we go. So, like Chapters 1 & 2 this show will again take place at The Garage in Islington, London and the card is stacked with a great debut on the card. 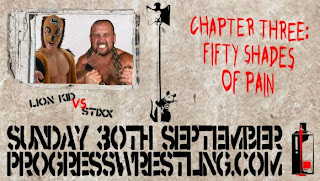 In a rematch from Chapter 2, STIXX will have his chance for revenge against The Lion Kid. At Chapter 2 in what I considered was a bit of an upset Lion Kid got the win over STIXX so the big man from Nottingham will be looking for a measure of revenge. 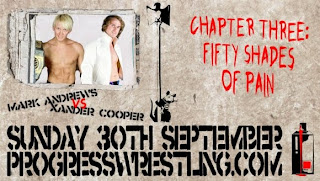 For the BWS Scarlo Scholarship we will have Mark Andrews defending against former champion Xander Cooper. Cooper was the original champion but was defeated by Andrews in a four way ladder match (the match featured Sam Bailey & Wild Boar) and at Chapter 2 after defeating Wild Boar, Andrews was attacked by Cooper in the ring but that wasn't the end of it as he went on to attack Andrews again during the interval. These guys really want to get their hands on each other so this match I expect is going to be a hard hitting match as Cooper tries to take the title back 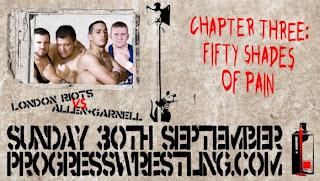 In a tag team encounter, Darrell Allen will team with Danny Garnell to face The London Riots. Now both Allen & Garnell were featured in singles matches at Chapter 2 and The Riots made their PROGRESS debuts where they basically demolished the young team of the Velocity Vipers which included Alex Esmail having his leg broke in a freak accident. I am always impressed with Allen when I see him and Garnell has been on the scene for a while and is well-respected on the British circuit but The Riots, wow, they for me were a great heel tag team, they were tough and wrestled tough too so I think the team of Allen & Garnell have their work cut out in this match. 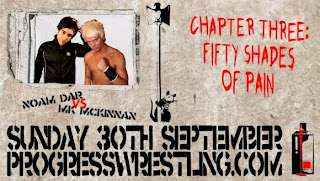 Making his debut for PROGRESS at this show will be MK McKinnan, he is a wrestler who is getting noticed now all around the UK and so he should because he is a great wrestler and anyone who knows me either personally or online via my site or podcast will know MK is a favourite of mine in British wrestling. His opponent will be a man who appeared at both Chapters 1 & 2 and that is Noam Dar. Dar has had a tremendous year wrestling some big stars in wrestling as MK has to be fair and is really on a role right now. Both these guys are at the top of the tree for me as far as British wrestling goes at the moment and is a match I'm really looking forward to. 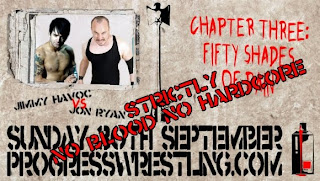 Jimmy Havoc gets another chance in PROGRESS this time facing another one of his former trainers in Jon Ryan. Havoc surprised many at Chapter 2 showing he could actually wrestle as he is known for 'death match' wrestling which is a point to this match as it's being billed as a Strictly No Blood No Hardcore. This brings with it a few possibilities, does it mean that's exactly what we will see? Either way, I think we'll see an entertaining match. 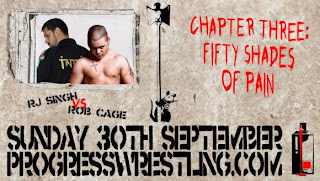 The 'Bollywood Dream' RJ Singh has got himself into a match with a guy who went down the same route as Jimmy Havoc to get booked for PROGRESS and this is Rob Cage, however, PROGRESS shut this down quick but Singh offered Cage a lifeline and challenged Cage to a match at Chapter 3 and if he wins, he can be apart of the Bollywood Empire. Should make for an interesting match and look out for that 'Ethnic Submission'. 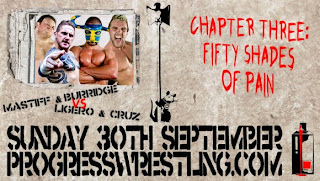 The main event will be PROGRESS Champion the 'Showstealer' Nathan Cruz teaming with El Ligero to take on the team of....Right, first things first, this match was supposed to see Marty Scurll try and get some form of revenge over Cruz & Ligero following the happenings of Chapter 2. Scurll battled Cruz in a tough 2/3 fall match which ended when Ligero inadvertently struck Scurll which led to Cruz getting the pin and the thrid and final fall and therefore retaining his championship. The story here those was the fact when Ligero did what he did he just shrugged his shoulders and walked off. This led Scurll to go on a rant and vow to get pay back on both of them. Eventually Scurll announced his partner as being Greg Burridge. However, Scurll has since been signed up to wrestle for the TNA British Bootcamp and so is unable to take part at the show and so making his debut for PROGRESS we will see 'Bastard' Dave Mastiff. Mastiff is a beast and in short, if he gets his hands on either Ligero or Cruz I'm sure he'll beat the living daylights out of them. It's going to be a great match I think, I enjoy watching all 4 guys so we're in fo a treat.

So there you have it guys, I hope this has wetted your appetite for what I'm sure is going to be a great show. I'm not sure if there are any tickets left but if you want to find out head over to http://progresswrestling.com

Check out my podcast The Indy Corner where we cover all aspects of indy wrestling both US & UK and strive to get interviews with wrestling personalities from all over - http://theindycorner.podbean.com or search for us on iTunes