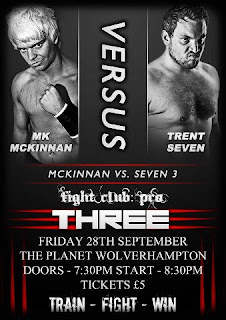 Fight Club: PRO return with what I am sure will be another great show. This show is titled THREE as it's their third anniversary show. Here is the card in full:-

Once again, I'm sure this will be a cracking event, as I said on this weeks podcast I have NEVER been to a bad FCP show, the guys always give 110% and always deliver. On to the show itself.

Chris Brookes has the third match in his 'trial series' and this time he is teaming with his good friend Jonathan Gresham to take on the great tag team of Lee & Jim Hunter. Brookes has come a long way in a short time and this match will be ideal for him, tagging with such a great worker like Gresham against an equally great pair of wrestlers in The Hunters. Really looking forward to this one.

Clint Margera reignites his heated feud with Dan Ryder. Margera calls himself a 'death match worker' and in short, he'll put himself on the line to give the fans a great match. Last month the two had a match that went all over The Planet right there in Wolverhampton but in the end, Margera was blindsided by another co-hort of the Rockstar Spud which led to Ryder getting the win. So you can bet your bottom dollar, this match is going to be wild. And I just want to say, like I have previously on the show, Ryder is a great heel, the reaction he gets from the crowd is one of the best I have seen in British wrestling by far and Ryder needs to be given credit for this, great job.

FCP champion MK McKinnan defends his title for the second time after his awesome match last month against Prince Devitt of New Japan fame. On this occasion, MK will defend his strap against former champion Trent Seven. This will be the third time the 2 have met one on one both holding a win a piece with MK's win coming this past June at 'Fight for The Future'. This match should be a cracker, both guys can go and although I've not seen the first match, I've heard it was great, I was there for the second match and it was just that and then some. Once again, one I'm looking forward too.

And finally, we have what is going to be the main event as in from Ring of Honor and other notable US indies we have 'Unbreakable' Michael Elgin coming in to face 'Bastard' Dave Mastiff, as Elgin said in his interview with us, when he was announced as coming to FCP people said to him they thought he may be put in there with Mastiff and, I like many fans am glad this is the match that has been booked by FCP. This match is going to be a war, this guys can both go, both can hit as hard as anyone else in the business and this is, as I said, going to be a WAR!! Looking forward to seeing this and Elgin live for the first time.

Guys, tickets for this FCP show are only £5, to say it's well-worth the money is an understatement, get there if you can, people travel from all round the country for FCP even if it means staying over in Wolverhampton for the night because FCP is worth it.