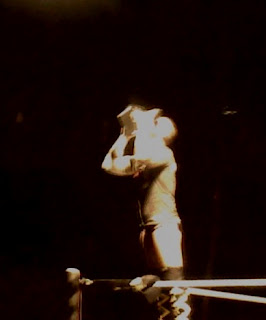 This picture was taken by Dani herself at the show

CM Punk is known as the Best in the world, Paul Heyman a legend known for taking wrestling up a notch... combine the two and you have an unstoppable force about to steamroll the WWE and everything in their way.

Punk is a force all his own. He has proven time and time again that he is one to be respected in the ring, on the mic, and on tour. He is a superstar that can stand on his own two feet; mic in hand and people listen... they might not always like what he has to say, but they listen. He says things that pushes the limit and keeps people talking week after week.

Paul Heyman.... a master of the mic. He has been able to shut people up for years. Manly hated for it, because he says things that you might not want to hear... He doesn't stop until the majority listens to what he has to say.
Obviously, it was only a matter of time till the voice of the voiceless and an advocate for the disrespected would team up to form a fireball that will burn through the WWE universe. It seems Heyman can do no wrong... everything he touches instant gold... but since Punk already has the gold on his shoulder... what's next?

This has been a topic thrown around by everyone as of late... and well... most people want a new heel stable. In my opinion it’s the next feasible step in a takeover; that’s exactly what I am expect a WWE takeover... With talent out the waa-zoo.

CM Punk, the leader... He's the champion. He demands respect and doesn't mind voicing exactly how he feels about anyone or anything. He's done it again and again. Pipe bombs exploding everywhere... I'm ready for another great one to happen and I'm hoping it’s going to be when he announces who will be joining the CMPUNK elite.
Who else...

Damian Sandow, He's been trying to build a name for himself in the ring. He has something to offer. I see some great things happening for him ... soon. Joining a stable with other notable adversaries is exactly the push he needs. He's smart and there is no telling what all he could be capable of, that’s where Paul Heyman's genius would kick in. At Raw Tour (State College) over the weekend is where I saw that it could work. During a lumberjack match, CM Punk facing Big Show.... Punk was out numbered with a good many faces or talent that just hasn't had a chance to develop yet... and when Punk was going to be pinned, Sandow through his foot up on the rope. That's when I saw the glimmer of something great that Sandow could bring to a stable. I like dirty fighters ... there should be more.

Cody Rhodes, talented but in need of a home. His obsession with the mask of Sin Cara is growing old... but his obsessions and devious ways would fit in this stable. Not as strong on the mic but makes up for with his wrestling abilities and the fact that he was building up steam in the last stable he was in... He needs this now.
Or...

Randy Orton... His problem is ... he comes back from a suspension... beats people... meaningless squabbles with Sheamus and Del Rio... but no real direction yet. Could he bring something to table? Maybe. He's been a part of 2 great stables already, so maybe he is over the whole stable thing. But I think he could lead him in the right direction.

I am going to throw the name of Tyson Kidd out there too. He’s a good guy. I’d like to see something different. He’s a smaller guy, he has untapped talent and he is looking for the respect that Punk and others have already achieved. I think if had a push from this kind of stable and distancing himself from the Hart Dynasty could really benefit what he could do next.

I'd love to throw Daniel Bryan in the mix. If the tag team thing fizzles out... I'd love to see him join forces with CM Punk and Paul Heyman. In my opinion Daniel Bryan and Punk are probably the two best talents in the business. Their feud was full of fury, action, and made us sit on the edge of our seats. To see them bringing the WWE universe to their knees would be killer. They could honestly take over just the 3 of them and it would probably be the most dynamic stable we have seen in years.

Forget nWo... this is a new era for the WWE. I for one cannot wait to see what is about to unfold at Hell in a Cell... and for months to come.

Or......... the alternative... we are going to see a power struggle between 2 of the most powerful men in the business. Two strong personalities, two people that own the mic, 2 people that climb and fight their way to the top. Punk and Heyman might implode.

Strap in kiddies. WWE is getting real.