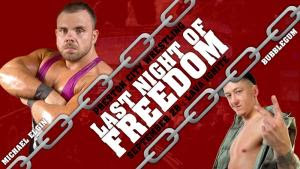 There are some great looking indy shows coming up here in the UK on the weekend so I will do a preview for each.

First off on Friday (28/9) Preston City Wrestling will be holding The Last Night of Freedom in Preston itself and here is a rundown of the card:-

This looks like a great card on paper, the match at the top features two of my current favourites on the British scene those being Kris Travis & Lionheart and I've not seen BT Gunn work but I am told he's a good worker and T-Bone, I have not seen much of but again, can do what is required in the ring.

The cruiserweight championship 3 way should be outstanding, Noam Dar is a big favourite of both Paul & I on the podcast and we all know El Ligero is a work horse and has taken part in one of the best matches to take place in the UK this year (against Akira Tozawa again in PCW) and Joey Hayes is not someone I've seen a lot of but hear good things about from Paul.

The match that has got a bit of attention indeed is Bubblegum vs. ROH's Michael Elgin, as the story goes, Bubblegum sold the PCW belt so to punish him PCW put him in a match with Shaun 'The Hammer' Davis but he paid Davis off so now PCW have brought in the hard hitter from ROH - 'Unbreakable' Michael Elgin to face the native of Manchester.

Overall this should be a great card, if you're in or around the Preston area make the trip. Details can be found over at http://prestoncitywrestling.com