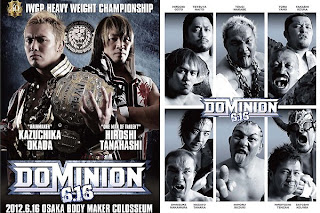 This was the big NJPW show from June which had Kazuchika Okada defending the IWGP Heavyweight title against Hiroshi Tanahashi as the main event.

This really is the way that you should open up a major show, fans were very happy to see Devitt and Ibushi open proceedings. The Ibushi led team are all based in the DDT promotion though the match was wrestled in a babyface style with lots of clean breaks early on. Among the highlights were Team DDT doing a triple dive to the floor, Bushi doing a very cool plancha into a huracanrana on the floor and celebrated by taking off his second mask, he was wearing a third underneath. The New Japan guys also hit a triple plancha, Devitt hitting Omega with a mean looking double foot stomp but Sasaki managed to save him. Ibushi hit a Sky Twister on Bushi, Bushi responded with a 1 man Spanish Fly and again Team New Japan was thwarted when Sasaki saved. Ibushi took the win after hitting Bushi with a powerbomb. This was lots of fun and didn't outstay its welcome. A good start to the event. ***1/2

Two things to note, Romero was wearing his outstanding fur coat which you may have seen if you follow PWG and secondly Captain New Japan's outfit looks like he bought a Mr America costume and dyed it yellow. This was a clash of a number of styles all wrapped into one, this started out with Nagata and Ishii working very stiff trading forearms & hard slaps which the fans reacted big to. Though it was the younger Inoue and Yoshi-Hashi that got most of the match and worked for the most part pretty well. Poor Captain kept getting ignored when tags were being made though he finally entered and hit a dropkick which surprised me, I thought Ishii would have killed him. Captain hits a Rock Bottom on Ishii, holds him as Nagata goes for a running kick. Nagata hits the Captain by mistake, Ishii with a clothesline and a brainbuster on the Captain and the heels win. Despite the match changing styles rapidly this was still enjoyable. ***

This is for the vacant IWGP Jr Tag Titles after Davey Richards & Rocky Romero were stripped when Davey missed the big Wrestling Dontaku show. This had a long story of Taichi being obsessed in unmasking Liger and this continued throughout the match. Liger appeared here in his white icicle outfit which is pretty horrendous. Taka was awesome here and doesn't appear to aged in the last 10 years, his heel work was first class. Match started to break down when the heels threw Tiger Mask into the referee, Taichi continued to rip at Liger's mask which allowed Mr Thunder to give him the red mist and also to Taka for good measure. Liger had facepaint underneath the mask so his face couldn't be seen. He ran Taichi through a table, attempted to hit him with a spike and finally powerbombed him fully through the table. Taka got hit by a piece of table when he tried to save. Taichi was finally pinned with a Tiger Suplex by Tiger Mask. Not the best match technically but very enjoyable for what they did with the fans delighted that Liger had beaten the heels and won yet another title in his career. ***1/4

Fans really reacted to Karl Anderson but not so much to the other three, I wonder how much Shelton enjoyed wrestling in front of such a large audience compared to his ROH run. MVP basically does the same routine that he did in the WWE right down to still using his Ballin Elbow. Tonga is quite the tribute act as well as the obvious Jimmy Snuka routine you also got nods to Ric Flair, Bruiser Brody and Mil Mascaras. End came when MVP took out Anderson with a plancha to the floor and banging his head on the rail when he landed. This allowed Benjamin to hit the Paydirt on Tonga for the clean pinfall. This was a perfectly fine midcard tag match. **3/4

This is for the IWGP Jr Title, Taguchi started quickly and hit a running dive on Ki within the first 60 seconds. He soon got caught in a tree of woe spot and sold that he had hurt his left knee. He did a good job of that, Ki then turns into a ruthless stalker constantly attacking the injured bodypart. He reminded me of Yul Bryner in the film Westworld at one point. Taguchi got the occasional comeback but Ki quickly retaliated. Fans started to believe they would see a title change when Taguchi kicked out of the Ki Krusher. Low-Ki used a sharpshooter that was very poorly executed and Taguchi made the ropes. Finish came when both men were battling on the top rope, once again Taguchi found himself in the tree of woe. Ki hit his Warriors Way stomp and retained. After the match Kota Ibushi came out to challenge for the title, Ibushi was a former champion who had to vacate the title due to injury. Ibushi issued his challenge in English, Ki accepted in Japanese, fans really popped for Ki accepting the challenge that way. A good but not great match. ***1/2

This is for the IWGP Tag Team titles, fans badly want to see Kojima & Tenzan become new champions. The champs actually go into the crowd to attack the commentator. Challengers leave the ring to make the save and they continue to brawl, the referee makes his count they ignore him and match is declared a double count out in less than 3 minutes. Champions are delighted but their joy is short lived they are re-starting the match. More brawling and chair shots, things pick up when Kojima gets the hot tag. Challengers hit the Dudley Death Drop on both champs but they can't get the three count. The referee gets thrown down, more brawling and chair shots. New referee has seen enough and he throws the match out. Fans not happy with that call, when Kojima was on offence this was very good but a lot of it was average brawling. **1/2

This is a tag match featuring four genuine title challengers to the IWGP title. This was then as you would expect quite the batle, all four were given opportunities to shine. Naito for his size is really a very exciting talent. He's had two classic IWGP title matches against Tanahashi and Okada but as yet to break through. Goto was the I-C champion at this point, Nakamura has that ability to just drip charisma so the fans react to what he's doing. Finish comes with Tanaka hitting Naito with his Sliding D clothesline, Naito reverses a second attempt into a cradle where Nakamura kills him with a Boma Ye kneedrop out of nowhere. One more Sliding D this time in the form of an elbow from Tanaka is enough to pin Naito. This was a very good match. ****

Your semi-final, they started out really stiff with slaps and hard chops quite similar to the Nagata & Ishii match from earlier on. Suzuki is frankly a terrifying heel. Suzuki gets an opportunity to work on Makabe's knee and legs and its good standard mat work with the fans willing Makabe to make his comeback. Suzuki gets a heel hook and Makabe refused to tap, Suzuki was urging the referee to stop the match as he continued to put more pressure on. Makabe finally made the ropes, the comeback was on. He hit a Death Valley Driver for a two count, Suzuki then went to the kicks. Finish once again was centred around a battle on the top rope which Makabe won, he hit two big kneedrops which knocked out Suzuki allowing him to the score the pin. A good match which was well worked. ***

This had the big match feel right from the start, it's almost impossible to believe that Okada did absolutely nothing when he was in TNA and yet he now is such a major star. Tanahashi dominated the early parts of the match and got to work attempting to weaken the left knee of Okada. The champion managed to lift Tanahashi onto to the top rope and the then dropkicked him to the floor, this apparently wasn't worth showing again. Okada starting to use kravat type holds to attack Tanahashi's neck, they are doing a great job of moving into the big moves and doing reversals which shows they are trying to build these matches into a great series where each man learns from previous matches. Tanahashi hooks a Texas Cloverleaf but Okada manages to escape. Tanahashi goes for High Flow but Okada rolls out of the way, Tanahashi reverses a tombstone piledriver into a dragon suplex. He hits a High Flow but to Okada's back, he turns him over but the second attempt only connects with Okada's knees. They again trade tombstone piledriver attempts which Tanahashi again gets the best of it, yet more awesome reversals before Tanahashi finally prevails with the sling blade followed by the High Flow. This was a fantastic main event. ****1/2
Overall this as to be one of the best wrestling cards anywhere in 2012. It always helps when you have a fantastic main event which sends the fans home happy. But this was a strong card from start to finish and there were 4 matches that was ***1/2 or better.

I cannot recommend this show enough, so seek out the tape traders and buy this ASAP. 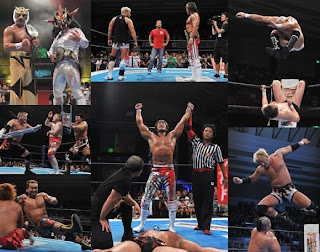