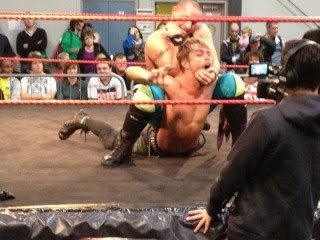 British wrestling has seen a big upturn in 2011 in my books, OK, no promotion has yet to secure a TV deal but I am sure one will soon. Just over the last couple of weeks three British promotions have been in the wrestling news.

First, on the weekend of November 19th & 20th the FWA did their usual show at the Memorabilia Show at the N.E.C. in Birmingham. I was lucky enough to be there on day 1 where the group put on three matches the third of these was a tremendous match between Jonny Storm & The ‘Rockstar’ Spud. Jonny went into the match as the babyface and Spud as the heel, the latter of course being from the Birmingham area but by the end of the match, the two had switched roles and they took part in a superb double turn. The crowd was a mixture of wrestling fans and general Memorabilia show goers but the two guys in the ring did such a great job as did referee Chris Roberts that they were able to pull it off.

Hopefully big things to come from the FWA, please check out their great youtube channel http://www.youtube.com/frontierwrestlingtv

On Friday November 25th, I went to the final show of the year from the AWESOME Fight Club Pro. This show was entitled ‘Infinity 2011’ and I have done an article on this show elsewhere on the site but I just want to repeat, I love FCP, the guys give 110% and the company NEVER fails to impress me. Also, due to the crowd at FCP, the aforementioned Spud was back in his heel role and it works a treat at FCP, the guy is awesome in his role, great gimmick – Top guy overall. Just in case you missed the other column, it had the Infinity 2011 tournament which consisted of two 4 way matches with the winner of each going into the final – MK McKinnan, my favourite worker of 2011 as I have seen him live 4 times now and was in 2 of my favourite matches of the year, one of which was on Project Mayhem Night 3, see below, won the tournament. Also, it was night 1 of the UK leg of the Nigel McGuinness retirement tour, he was set to face FCP champion Trent Seven and he did just this but along with the added spice of former ROH champion, like Nigel himself is, Eddie Edwards. Edwards ended the night as FCP champion, great match, great show and year in FCP overall.

I can’t wait for the next FCP show, please support them by LIKING their facebook page https://www.facebook.com/pages/Fight-Club-PRO/234516669556 and BUY Project Mayhem on DVD off them over at http://fightclubprob.com

And to top this off, this past Sunday, IPW-UK had their 7th Anniversary show and the card was loaded, thanks to @gadget80 on twitter here are the results :
Marty Scrull over Dean Allmark (Cruiserweight title tournament bracket A final), Project Ego beat Tempest Warriors, Joel Redman over Nigel McGuinness, Eddie Edwards over Noam Dar (who was in for Martin Stone who could not compete but was there), Dave Mastiff won a 4-way over T-Bone, John Ryan & Terry Frazier to become number 1 contender to the IPW-UK title , IPW-UK champion Sha Samuels over the Lion Kid. The main event was IPW-UK tag team champions Marty Scrull (again) along with his Leaders partner – Zack Sabre Jr. going over The Young Bucks (Matt & Nick Jackson). I imagine this match was great, the Bucks have a bit of a reputation but loved their match recently on ROH TV so I can’t wait to see this match.

British wrestling is looking good, there are more promotions of course that I have not mentioned, Steven Fludder is doing great things up in Preston with PCW so look out for his upcoming show in December that will feature McGuinness as he continues his retirement tour.
Posted by WrestleFigsUK at 13:47