The Indy Corner Presents An Interview with 'Prince' Fergal Devitt 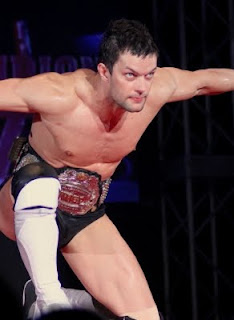 Q: What are your memories of wrestling growing up –were you a big British Bulldog mark like myself and most other young UK wrestling fans? Which wrestlers inspired you to make this your career?

A: Actually one of my earliest memories, and the only memory I have of my granddad is of watching world of sport wrestling with him on a Saturday afternoon.... then when Sky came to Ireland I was a huge Ultimate Warrior fan, and The Rockers. I used to love everyone, especially the lads that moved around a bit Rude, Perfect, Razon Ramon, Savio Vega... I was never a huge Bulldog fan at that age.

Q: I read you played gaelic football when you were younger. Any ambitions to become a professional gaelic footballer, or did you always know you wanted to be a wrestler? Then again, I’ve seen Gaelic football – being a pro wrestler is probably less dangerous!

A: There is no such thing as a professional gaelic player, even at the top level the sport is played for pride of county. The players don't get paid which might sound insane to people watching the premiership. I played at quiet a high level and achieved quite a lot as a player, But when i started wresting at 18 that slowly started to take over and become my passion and gaelic football slowly phased out of my life over the following few years.

Q: You were relatively young when you made the choice to go to the USA to pursue your career as a professional wrestler. How difficult was the decision? What did your family and friends think about you going to the States at a young age?

A: If you want something bad enough there is NO hard decisions, you simply do EVERYTHING it takes to do to follow your dream. Its an easy choice, stay in Ireland and UK and imagine doing SOMETHING with wrestling OR go out and MAKE EVERYTHING happen! My family supported me, I'm sure some people though I was a dreamer and I would be back in a few months, because I thought the same too.

Q: You are now most well known for your career in New Japan Pro Wrestling where you have been extremely successful. What were the early days of training in the NJPW dojo like? Everyone has heard horror stories of how hard and intense the training is, how did you find it? How did it compare to the other training you had undergone in the UK and the US?

A: The horror stories are true, 1000 squats, 100's of push ups, cardio drills, endless bumps, etc etc, everyone knows what goes on in the dojo. But that is a small price to pay to wrestle for one or the most prestigious companies in the world. I was lucky to have come up the hard way. Andre Baker at hammerlock was no pushover when it came to training. They were some of the hardest sessions you could imagine, and having training like that behind me, and then my few months in the LA dojo had somewhat prepared me for what was to come in Tokyo. There are no short cuts training, you just have to DO IT! Simple. If you can do 1 squat you can do a 1000 squats, its just a mental wall in your head stopping you, all you need is some guts to push your self over that wall.

Q: In your early career in NJPW you were compared to Chris Beniot and even given the Pegasus Kid 2 gimmick. How did you feel about this at the time? Was it flattering to be compared to a worker as skilled and respected as Benoit was at that time? Or was it a case of you not wanting to be the 2nd Pegasus Kid but the first Prince Devitt?

A: It was flattering, but for me I was never a Benoit fan, I could never see the comparisons apart from being a foreigner in the dojo. Exactly I never wanted to be the next anyone, I cant understand people that think like that. I want to be ME

Q: Since your debut in NJPW you’ve worked regularly with one of the biggest legends in Japan, namely Jushin Thunder Liger, a man who revolutionized pro wrestling in the 90s with his gimmick, in-ring style and also his idea to create the Super J Cup. What are your thoughts on Liger? What kind of impact has he had on your career?

A: A fantastic man behind the mask. Welcomed me with open arms at the dojo, and has helped my training and development in the ring no end. I'm still learning and picking up things from him every time we lock up. Its the simplest of things, that most people wont even notice, but even still it blows me away to think I hadn't noticed it before. And whats more impressive is that he is showing no signs of slowing down!

Q: You have had a lot of success in tournaments in NJPW with wins in the J Sports Crown 6 Man Openweight Tag Team tournament. As well as a run to the final in the Super J Cup in 2009. After the disappointment of suffering injuries in the 2007 and 2008 BOTSJ tournament you got to the final in 2009 and of course won the whole thing in 2010. How important have these tournaments been to your career in NJPW? Why do you think the US promotions don’t use this same model to help establish new stars?

A: Injuries are a part of wrestling, and I've had my fair share but I won't complain, sometimes they have actually forced me to work harder and smarted and therefore have made me a better wrestler for it. I love the tournament format, people watching, the fans in the building, they know how hard the lads are working, when they see you walk through the curtain for sometimes the your 3rd match of the night, having already wrestled every night for the last 2-3 weeks straight to get there and you can feel the respect and the anticipation in the building. Of course when your presented in these situation time and time again it gave me the perfect stage to show people what i could do and gain some credibility as a serious challenger to the title. It is used in the states to an extent in king of the ring and the best of the best I think its called…? but in the states they relay more on stories telling to establish new stars so opposed to the Japanese method of work rate.

Q: Was your IWGP Jnr Championship win against Marufuji must have been the greatest moment of your career to date? Could you believe that the same kid from Ireland who started training 10 years before had now won one of the most prestigious titles in pro wrestling against a legend like Marufuji? It must have felt like a dream come true. How much did that moment mean to you?

A: It was a dream come true, but at the same time i wasn't bowled over by the moment. Obviously facing Marufuji, who I consider to be one of the finest workers in japan, was a big honor in it self. It had been a long and hard road to that point in my career so i didn't feel out of my depth but I was something that I had wondered maybe i was going to keep coming up short in attempting to active so in a way it was a relief. I was happy with the way the match went and mostly for the reaction for the NJPW fans in Osaka that night.

Q: NJPW really allowed you the chance to ‘run with the ball’ as the IWGP Jnr Champion, your Title reign lasted over a year and you faced some of the best Jnr wrestlers in the world during that run. No doubt a lot of the matches hold a special place for you. But if you had to list your top 3 favourite title defences, which would they be?

A: To be honest I can't remember many of the title matches, and I felt that the title run it self was hampered by injuries and that I could have gotten a lot more out of many of the matches. The match at the dome with Ibushi stands out in my mind only for the fact that it is a huge milestone in anyone's career to have a singles title match at the dome coupled with the fact that my parents had traveled out from Ireland to see it made it without a doubt that standout moment of the reign. Hopefully I can recreate a something like that I'm my 2nd reign.

Q: I’m going to name some wrestlers and I’d like you to give me one word or phrase that you would associate with them:

Q: I know probably always get asked this question but have you had any offers from WWE to work for them? Does working for WWE interest you? If you did work for WWE do you think you’d be able to keep the style of in-ring work that has made you so successful in Japan?

A: It interests me very much. I'm sure a time will come where I want to try new things and new challenges and if the time was right i would absolutely be open to it. Its important for me to keep pushing forward and keep pushing myself. As regards style in the ring, it's still going to be Fergal Devitt, regardless of what name or guise I would be under, beneath it all it will still be me and I will work just as hard there as i would in NJPW.

Q: Who are you favourite wrestlers working today?

Q: As a pioneer and inspiration to all UK based wrestlers, what advice would give to them to help them achieve their dreams of becoming a successful pro wrestler?

A: The person that will help you the most in life is YOURSELF. All it takes to get where you want to be is EVERYTHING. No 'what if's?'

Q: Finally, if you could have a dream match with any wrestler, past or present, who would it be with and why?

A: Shawn Michaels, in my opinion the greatest performer ever.

WLH & The Indy Corner would like to thank Fergal VERY much to take the time out of his schedule for doing this interview. And as WLH editor-in-chief I would personally like to thanks our very own WLHDuckman for constructing the interview for the site.

I hope you all enjoyed it.
Posted by WrestleFigsUK at 12:25