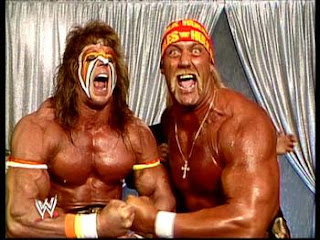 Recently, the former Ultimate Warrior posted on YouTube a couple of heart felt videos paying tribute to the late 'Macho Man' Randy Savage which got him some good reactions from the Internet wrestling community.  Around the same time, former foe of both Warrior & Savage Hulk Hogan was featured on HDNet's The Voice vs.
The interview with Hogan was so-so, it wasn't over revealing but I did enjoy the part where Hogan talked about blading. Many on the 'net thought Hogan was basically talking complete crap a lot like in his book. Warrior has since posted another video saying he has a video to be aired this week where he will basically make some revelations about Hogan that will 'shock us all' . Obviously the 'net is rife with what could be possibly said by Warrior.

Answers on a postcard please

Get the WLH app for your smartphone at http://mappin.com/app/WLHBlog
Posted by WrestleFigsUK at 14:09