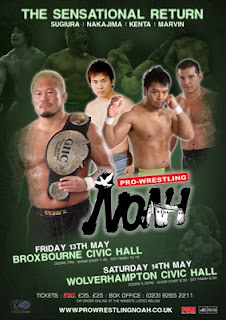 The phrase it does what it says on the tin comes to mind when viewing this match. It really was nothing more then a bonus match and one that many quite honestly didn’t care about too much from the reaction it got.

Prior to the match beginning MC for the night Andy Quildan announced that the bonus would begin and for fans to take their seats. I was already in my seat at this point and seeing people wander in but not in any real rush. Was this because they knew weren’t interested in a bonus match? Or just didn’t care? And to be honest I think it was half and half.

As the match got under way many people were still coming in and I was trying to watch the match then having to stand up and give way to people who were trying to find their numbered seats.

It took me away from the match but to be honest from what I had seen so far their really wasn’t nothing keeping me that interested or entertained whereby I felt the need to watch.

Overall I felt this match really wasn’t that good, I personally feel it would have been booked as perhaps a tag match of the All Stars (Robbie Dynamite & Mikey Whiplash) vs Garnell and tag partner of his choosing. It just fell flat, got no reaction. If the match didn’t happen I don’t think anyone would of even noticed or cared that much, asides from Dynamites body splash which he then turned in mid air and landing the opposite move which I have to admit was good but it was just a case of little too late.

With the Broxbourne Civic Hall almost filled to capacity and everyone now finally in their seats the show began and what a singles bout to open. Two of Pro Wrestling Noah’s finest cruiserweights doing battle and boy did it live up to what my expectations.

I haven’t seen a lot of Ricky Marvin matches but from what I had seen I was impressed and likewise live now. The highlight from this match was certainly Marvin's use of the F word as it came completely left field.

I’d expect that from some fans but not the wrestlers, not that it was a bad thing if anything it was very comical given every time Kotaro was on the offensive it’s all Marvin could do was until the match really began to take shape.

With Marvin running up the ropes, before doing a twisting body splash to the outside, and Suzuki giving Marvin not one but two tombstones.
It was slap for slap, super kick for super kick, back and forth till eventually Suzuki got the win with a tiger driver.

I haven’t seen Kajiwara before so wasn’t sure what to expect from him unlike Ishimori who I was very familiar with. However looking at the size of both competitors it looked to be a quick paced cruiserweight match which it was.

I’m not sure if it was due to the last European navigation tour show that I had really high hopes for something out of Ishimori given how he was in the match of the year of 2008.

So when looking back at the matches from the whole night I have to say this was my least favourite match, not it was a bad match. Far from it, if anything it was a really good cruiserweight match but was hoping for a lot more high flying spots then we got.

The best move of the match came at the end with Ishimori doing a 450 dropkick on Kajiwara for the win. Good match but on a card like that with such high calibre it was always going to be hard to have the stand out match like on the last Noah tour.

The Kings of Wrestling vs Takeshi Morishima & Atsushi Aoki

What can I or anyone who sees this match say but wow. The kings of wrestling were so over by the UK fans and really had the crowd in palm of there hands it was amazing. Putting them in their against Aoki and Morishima on paper I thought before hand I wondered how that will work but once the match got started it worked really well.

I think Aoki was the only person who looked out of place due to his size but at the same time he was able to show the UK crowd just how much he has improved since the last time he was over.

Looking back at this match their was two main highlights that personally stuck out during the match. One being Claudio managing to give Morishima the big swing and the second being lifting Morishima over his shoulders for a scoop slam.

I look forward to re-watching this match once it’s released on DVD as it was certainly one of the matches that stood out that night. With the finish coming from hero and Claudio lifting Aoki on their shoulders before bringing him down with a sit-down power bomb.

Great stuff by the kings of wrestling, hope to see them in the UK again soon.

Winner: The Kings of Wrestling

This match for me was my choice for match of the night even though I would have liked to of seen more in the match. This match started with Zack in control of Nakajima really taking it to him but in a technical style and not the stiff strikes that perhaps many were expecting.

Followed by a dive to the outside a the odd stiff kick, but not long after that Nakajima really showed off what he could do and being a big fan of the guy I’ve seen plenty of his matches so I know just how hard he kicks.

However he really kicked Zack, very stiff and many times thanks to the crowd cheering for one more kick and Nakajima was only happy to do it.
Zack looking in lots of pain, either that or he was doing a great selling job as for the rest of the match it was very much all Nakajima.

Which again wasn’t something I was expecting, I was hoping we’d get a lot of strike for strike from Zack but it never really happened and this is my negative about the match. But like I said it still gets my vote for match of the night, as got some really good Japanese style wrestling which is what I made a ticket for and it certainly delivered.

The end of the match came with Nakajima giving Zack a brain buster and about the 10th stiff kick to the face, poor sod. I lost count the number of kicks Zack took but it was a lot. Great match wouldn’t say no to a rematch sometime down the road.

Admittedly I haven’t seen any of Fish or Taniguchi but was looking forward to seeing what they could do given they were in their with KENTA and Go so I had high hopes going into it. The match begin slowly enough with Fish vs Taniguchi before tagging in the partners and this is where the match really began to take shape.

It was just as expected kick vs chop and it was fantastic, it was just what I hoped for. They hits from one to another were just as loud and stiff as you can imagine, but come the end of it I have to say it wasn’t anything great to the point were it could be given a match of the year contender status.

Which is a shame especially when KENTA & Go were in the match, it was fantastic stuff I think had fish and Taniguchi not been their tag partners then perhaps this could have had the making of the previous match of the year tag match from European navigation 08.

The end result was quite surprised in that it was Go giving fish a go flasher for the win, as the match went on I was highly expecting KENTA & Fish to get the win so surprising result.

It was time for the main event and in what could be described as perhaps the best match I have ever seen Dave mastiff in.

The match began very slow at first and was very much a big man powerhouse style. The match slowly progressed into harder style with more power lifting style moves, trying to see who was the stronger wrestler, as to be fair seeing them both in the ring at the same time they had a very similar build.

In what could only be described as amazing, during the match Mastiff pulled off a moonsault, a triple jump sault & taking a German suplex off the top rope. I was surprised Dave was still alive after that match, as seeing it all live words couldn’t describe. It was just the most insane and incredible thing I’ve seen out of him in his whole career.
I hope that Noah themselves took notice of this as after that match their was no doubt in my mind that Dave could be a perfect fit in the Noah roster. The end of the match came after the top rope German suplex by Sugiura onto Mastiff and followed it up with an Olympic slam to retain his GHC title for the 13th time.

Overall an incredible night of wrestling, no bad matches everything was good to very good. Having said that their wasn't no real stand out match of the year candidates coming out of it like the first tour.

None the less a great show and I look forward to seeing it on DVD and would highly recommend it to anyone who wasn’t there to see it live for themselves.