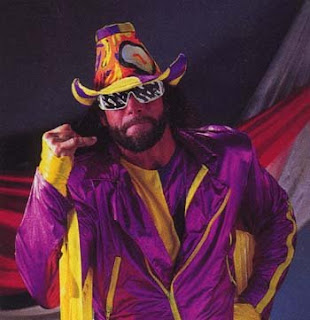 Website TMZ has reported that former WWF Heavyweight champion Macho Man Randy Savage has passed away, here is what they posted:

TMZ spoke with Randy's brother, Lanny Poffo, who tells us the wrestling legend suffered a heart attack while he was behind the wheel around 10 AM ... and lost control of his vehicle.

Earlier this month, Savage celebrated his 1-year anniversary with his new wife Lynn.

Randy Savage was a big star in the high times of the WWF in the mid to late 80's and then in the 90's. Made a name for himself in the Memphis territory but became most well known in the WWF. Savage was a WWF Intercontinental champion and the match where he lost the IC title against Ricky The Dragon Steamboat at Wrestle Mania III in 1987 is still regarded as one of the best matches in Wrestle Mania history. Savage won the WWF Heavyweight title in a tournament over Million Dollar Man Ted Dibease at Wrestle Mania IV. Formed a partnership with Hulk Hogan and they called themselves the MegaPowers. The two eventually split up and Hogan defeated Savage for the title at Wrestle Mania V in 1989. Savage's career flounded for a year or so before getting embroiled in a feud with then WWF champion The Ultimate Warrior. Savage cost Warrior his WWF title to Sgt Slaughter at the 1991 Royal Rumble and this led to Savage vs. Warrior in a career match at Wrestle Mania VII in what was an amazing match. Savage went into retirement, became a color commentator for the WWF but eventually came back as a in ring performer. Savage won his second WWF title from Ric Flair at Wrestle Mania VIII but lost it back to Flair in September of 92. In 1992, Savage actually formed a tag team with the Warrior calling themself the Mega Maniacs, the two were supposed to face Razor (Scott Hall) Ramon & Ric Flair at the 1992 Survivor Series but Warrior had another fall out with the office in the WWF and Savage recruited the then inactive Mr Perfect Curt Hennig as his partner. Eventually, Savage would leave the WWF and sign on with rivals WCW but had a pretty un-eventful career in the Atlanta based promotion even though he won their version of the world title 3 times.

For years there were rumors as to why Savage wasn't brought back to the WWF or inducted in the WWE Hall of Fame. As of the last copuple of years, there was strong talk that in either 2011 or 2012 Savage would be inducted, this didn't happen in 2011 and we have no idea to be fair if he was going to be inducted in 2012.

The last thing seen of Savage was a promo he did for the WWE's All-Stars game which made the chance of a HOF induction even stronger.

I don't know much of the story what has happened with Savage's passing but if true, pro wrestling has lost one of the very best the business has ever produced.