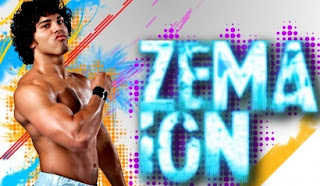 Wrestling’s Last Hope can exclusively reveal that the latest entrant into Southside Wrestling Entertainment’s Speed King 2 Tournament on 25 May in Nottingham is Zema Ion.

Zema Ion who is 26 years old has been in TNA since 2011 when he competed in a tournament in the company’s Destination X event competing with outstanding talents such as Jack Evans, Low Ki and Austin Aries.

Later on in the same year he competed in a gauntlet match to determine rankings in the X Division during which he eliminated Southside’s own Mark Haskins before being eliminated himself by Jesse Sorenson, this left him fifth in the rankings system, he then competed in a five way ladder match won by Brian Kendrick, however all of this time Zema was improving rapidly and following a heel turn he then entered into a best of three series with Anthony Nese to determine the number one contender for the X Division Title, Zema won this series to enter into a four way match up for the title along with Kid Kash, Jesse Sorenson and the eventual winner Austin Aries.

Zema though was not to be stopped he had a further five unsuccessful attempts to take the X Division title in various different types of matches before he entered into an Ultimate X match along with Kenny King,Mason Andrews and Sonjay Dutt, this time the rapidly improving Zema Ion emerged victorious and he became the first ever Filipino to win the TNA X Division title.

This gave Zema Ion such an injection of confidence which meant that when combined with his ever improving ring skills he successfully defended his X Division title on five occasions including defeating another Southside star Doug Williams by submission (the submission impossible). Eventually it took a legend in Rob Van Dam to relieve Zema of his title 98 days after he won it but what a talent this young man is.

Commencing in 2008 Zema worked in Mexico learning yet another style, match up’s there included facing off against the likes of El Generico, La Parka, Jack Evans and Extreme Tiger amongst others.

Back in the states in 2010 he won the IWC Super Indy Championship winning a three way with Azrieal and Johnny Gargano.

He has seven known finishers and three known signature moves, his finishers range from high flying splashes to running double knee to an opponent in a rana pin through to the submission impossible.

All in all Zema Ion is going to be a fearsome competitor at Speed King 2, he brings with him a winners record,international experience on three different major wrestling nations, experience from matching up with the world’s best and beating them, tremendous in ring versatility due to his wide ranging learning experience and an attitude which borders on cockiness but is in reality supreme confidence in his own talent and justifiably so!

Zema of course enters a tournament which even before his inclusion is packed with the very best from all around the world in this style of wrestling.

To date named are:-

2 other names still to be revealed....


This whole show is going to be absolutely epic, often when the wrestlers for a show are announced before you know the matches you hope that wrestler a faces off against wrestler b so that it is a good match, in this event I really do not mind who faces who, it makes the mind potentially explode with the possible match ups here, it is like a computer game where you create your favourite wrestlers and match them up against each other as in reality those matches would not happen however Speed King 2 is going to make some of those dream match up’s become reality and right in front of your eyes if you are fortunate enough to have a ticket.

Stars are featured from all around the globe, TNA, Ring Of Honour, Dragongate and CHIKARA are all represented but what is as exciting as anything is the fact that the UK talent on this show has the opportunity to prove to a global audience that it has what it takes to match up with the best from these illustrious promotions.

Saturday May 25th at the Rushcliffe Arena in Nottingham at 7.00pm this global feast of wrestling commences, on the night the format is as follows:

Seven first round matches, the seven winners then go into a seven way final, the winner is crowned as the new Southside Wrestling Entertainment Speed King Champion, an accolade which very clearly is going to be highly prestigious given the entrants.

In addition after the first round matches are complete and before the final happens there will be a tag team match from the Pro Wrestling Eve Women’s Division which will feature some of the very best female talents out there currently, that too is going to be something very much worth watching it will certainly include the very best female talent from around the world.

To book tickets for the Speed King event and the front row is already sold out please go to www.southsidewrestling.co.uk or look up Southside on facebook, you can also follow for future announcements on the handle of @southsidewe.

If you would like to be the first to hear future exclusives or to enjoy articles on wrestling please follow myself on @shadetheshoot or the editor/owner of the site @WLHSTU and his podcast @TheIndyCorner
Posted by WrestleFigsUK at 12:27