John Cena vs. CM Punk – Early Match Of The Year By Nick Mason 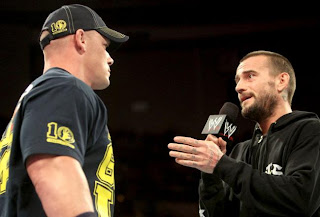 Monday Night Raw was golden this week, and in my opinion was the best of the year, showcasing a broken Lesnar face, a Triple H Pee stain and a banned piledriver.

WWE have released some exceptionally graphic images in regards to Lesnars injury, he suffered a severe cut to the back of the head which caused blood to rush out of his skull, and I don’t think it was a blade job, pure toughness. Testicular fortitude some might go as far as saying!

But now onto the main point of this post, and if you’re a Cena hater, you might want to read on, because the main point of this post is Cena vs. CM Punk on raw. This match was pure golden to myself and other wrestling trainee’s alike, both superstars showcased unpredictability and great technical ability making the match very interesting to watch. We may have seen a banned move in this match, but who cares, nobody is injured, and John Cena added another move to his arsenal when he pulled off a power bomb.

For those who didn’t know, the Piledriver was banned when done in this form due to Owen Hart and the Stone Cold situation all those years ago when Stone Cold actually broke his neck after completing this manoeuvre. The crowd really summed up why a move such as this was needed to re awaken the fans of old, and add the unpredictability factor to a match. It is also worth noting that the move is only banned in this form, therefore allowing the Undertaker and Kane to perform the Tombstone Piledriver as normal.

Just a for the record, I am not a John Cena hater, nor a John Cena lover, I purely like his wrestling ability and his amazing ability to perform when needed, this match really displayed why someone like Cena is one of WWE’S top faces and will be for some time to come, he really needs the WWE championship around his waist, we must remember that he hasn’t had a significant run as champion for well over a year now.

This RAW IS a must watch, and I will study this for a good amount of time because there was so much goodness in this episode of raw and I hope they can build on this on the road to WrestleMania.

Thanks once again for reading this entry!
Nick Mason
@MrNikosMason
Posted by WrestleFigsUK at 10:20