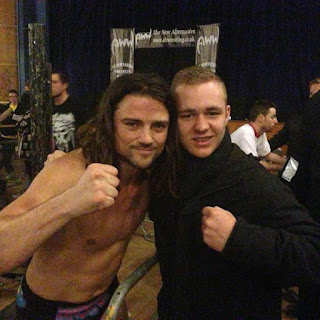 Q: You're only a young man now but who have been your wrestling influences growing up?

A: I have always been a big fan of the Japanese guys like Kenta, Nakajima, Shingo Takagi so on so forth...

Q When did you decide being just a fan wasn't enough and you wanted to train to be a wrestler yourself?

A: The idea of becoming a wrestler myself came when I was just 14 and luckily for me there was AWW training just up the road from where I live.

Q: Fight Club: PRO fans will know you have trained under them so tell us who trained you at FCP and any thoughts of when you first started?

A: All of the guys from Fight Club: PRO have helped train me to the product I am now from Trent Seven to Dave Mastiff to Hunter Brothers etc.

Q: Is FCP the only ones to of trained you, if not tell us about any more?

A: Like I said in the previous questions no FCP aren't the only ones who trained me, I originally started at AWW and trained with those guys for about a year and then I heard that NSW had opened up their training and stuck with those guys for a short while until they got shut down unfortunately. Eventually I found a true home with the FCP guys and knew that it was right for me.

Q: You have done some training with Eddie Edwards which I myself was present at, I have to say, you were the best student in that class, what was it like learning under Eddie?

A: Thank you and it was a great pleasure learning from such a great in ring performer of his status. Eddie Edwards is an awesome character both inside and outside the ring and that is why I have so much respect for him.

Q: Have you had any other bits of training from the imports like Gresham or anyone else, if so, thoughts?

A: Yes, there are several big imports I have trained with like Gresham as you said, Michael Elgin, John Walters and Douglas Williams and all of those guys have taught me what they have to offer in pro wrestling.

Q: You have wrestled for Great Bear Promotions including a very good match with Chris Brookes, memories of the match and working with Chris?

A: I loved working with Chris Brookes at Great Bear because we have such a good chemistry inside and outside the ring. Although he can at times be a little snug, he is great to work with and I look forward to working with him sometime in the future maybe even at Fight Club.

Q: After being around the FCP shows for a while now, recently at the 'No DQ' show you got to step into that environment for the first time wrestling Dan Maloney, how did you feel leading up to the match and tell us how you think the match went?

A: Coming up to my debut at FCP I was very excited and was looking forward to the match against Dan Maloney since as some people know we have trained together for some time now. I feel the match went okay but could of gone a little better in ways but overall I feel the match was a good, solid contest.

Q: You're only at the start of your career, you will continue to grow and get better but what are your aspirations in wrestling, travel around the UK, go to Japan, go to the US for the indies or even bigger?

A: Well I want to do it all in pro wrestling. I would like to do some work around the UK, Japan, US indies and even bigger. My biggest aspiration as I'm sure 99% of wrestlers feel the same, I would like to eventually become a WWE superstar and become a worldwide icon.

Q: And finally, following on from that question, who in the next say 2 years would you like to face on the UK scene?

A: There are a few people I would like to work with on the UK scene like Dave Mastiff, ZSJ, Noam Dar, Gresham etc, I would also love to do some more work with Josh Bodom.

Thanks Tyler, I'd just like to thank you for time and wish you all the best for the future.

Thanks Stu, no problem buddy.
Posted by WrestleFigsUK at 14:51