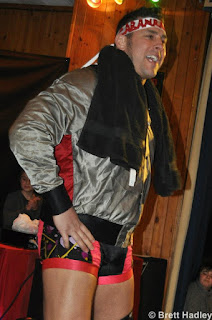 (All Picture Credits to Brett Hadley)

This show demonstrated all that is good in UK wrestling right now and is the start of what will be an outstanding year for Southside Wrestling, the growth of this promotion given the quality of matches on offer and how smoothly it is put together is assured and I am particulary looking forward to later in the year to Speed King 2 which has the potential to be one of THE tournaments globally for wrestlers to compete in such is the worldwide quality of the card being put together.

Back to this show though.

Opener was a very good match in a clash of styles between two of the UK's best talents T Bone and El Ligero, this match ebbed and flowed until in the end the sheer size of T Bone I think made the telling difference and Ligero left defeated but far from disgraced. 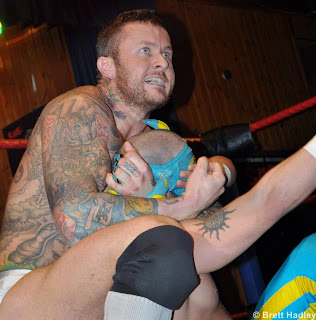 Second match was the second semi final in the mini tournament to deliver the number 1 contender for the SWE title with the opening match being the first semi final, this second match was my first viewing of Jonny Storm who was up against the guy who has to be the most talented 18 year old wrestler in the country Robbie X, this was a match that was bewildering at times given the speed at which moves were executed, it was a technically supreme match up in the end won by Storm but Robbie X in some ways was as much a winner as Storm given the disparity in experience yet how well Robbie held his own a fact acknowledged by the classy Storm holding up Robbie X's hand at the end. 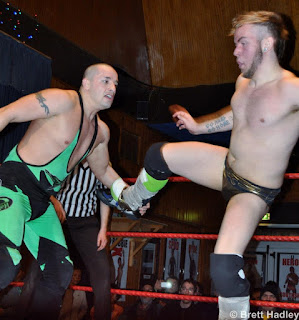 However sadly this moment of British class was soon overshadowed by the arrival of the House Of Pain lowlifes Stixx and his sidekick (boyfriend?) Harvey Dale both of whom go around the country taking on wrestlers much more talented than themselves but obtaining wins by cheating and general underhand methods.

Stixx who lost his title in December fair and square came out moaning like the bitch he is about how it was all so unfair that he was not in the this tournament and because of that later on in the night Storm would pay the price, during this Harvey Dale was looking like a man who was beaten and had lost his mind, this he maintained throughout the night as did his physical closeness to Stixx prompting the endless chants later on of Stixx's boyfriend.

Moving away from that we went onto The Predators defending their tag titles against a new team called Battle Squad Awesome which is comprised of Diamond Dave Andrews and Danny Chase, two guys I have seen on a number of occasions and been massively impressed with, typical of Southside who not only have the top UK stars and imports on but also recognise the best young UK talent and include them on the shows as well, this was a terrific match which went one way then the other, real good old fashioned tag team stuff, BSA certainly had the edge in terms of speed and technical quality but The Predators had the edge in experience and also knowledge of underhand tactics - ironically they also managed by Harvey Dale - see the link with underhand! In the end The Predators suprerior ability to manipulate a referee who needs to remember finishing off his hairstyle before coming into the ring was the telling factor and they retained but Battle Squad Awesome will impress anywhere that they go. 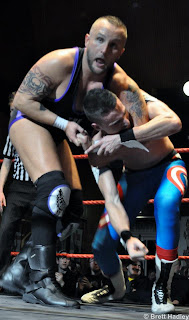 Final match before the interval was the monster Bam Bam Barton against the new Mexicana on the show Loco Imbecile, Bam Bam was scary a huge huge fellow who eyeballed a fan for having the audacity to boo him before the match, Bam Bam at one point I thought was going to tear the ring apart with his hands such was the anger of this beast but Loco who had the crowd roaring with approval managed a roll up and is now in possession of a 100% career win record!

After the interval we had the aforementioned Stixx along with his boyfriend Harvey Dale against the star import Colt Cabana, once the match actually started which took some doing as Stixx could not bear to be parted from Harvey long enough to do a match Colt soon embarrassed his less talented opponent making a mockery of the slowness of Stixx and clearly demonstrating why Stixx needs Harvey Dale to aid him to cheat his way to wins, as the match progressed the atmosphere was electric with chants of Colt Cabana loud and almost lasting for the entire duration of the match, during this Stixx slowly started to gain the edge over Colt using his superior size and strength to advantage whilst on the outside his boyfriend was busy distracting the peacock headed ref Russ, eventually Stixx gained the win due to no surprise here Harvey interfering from the outside, the happy ending to this was that Colt attacked Harvey during all of this and ripped the dreaded tassled shirt to shreds leaving Harvey so emotionally distraught he was in no mood to celebrate the win of Stixx! 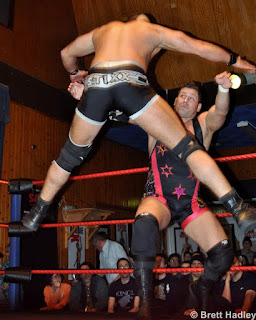 Then we came onto the final of the mini tournament after which the show was named 'Opportunity Knocks!' This was a brutal encounter between Storm and T Bone which went all over the arena, included use of tables and the bar, the sheer brutality of this had to be seen to be believed, the technical excellence of both guys as well when in the ring was top class, the crowd were heavily into this match which really did feel like a big match, nobody deserved to lose this but sadly due to the previously promised interference of that showstar for all things bad Stixx came out and ensured that the much more talented Storm lost meaning that T Bone now will have a title shot and also I assume completes the heel turn of T Bone which he had started at the previous Southside show when he attacked his own tag partner Mad Man Manson. 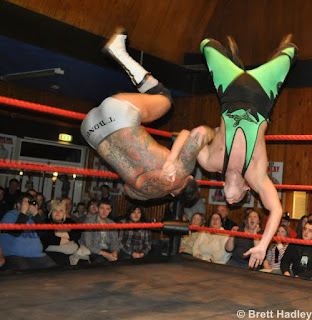 So the main event came, SWE title match, Max Angelus vs RJ Singh, the SWE title is one of the most prestigious titles in the country, partly due to the rise in prominence of the promotion and also partly due to the fact that Southside focus on quality wrestlers being in their title hunt, The match was again brutal, it just shows how important this title is, again it went all over the arena, you just felt that neither guy would give up, signature moves and finishers applied and kicked out of, crowd gasping to believe the quality of what was unfolding in front of them, RJ Singh desparate to obtain this title which would really elevate him in the UK picture such is the prestige attached to the SWE title, Angelus the guy who possesses THE most lethal kicks in the UK refusing to yield, over and over again they went, the crowd wincing at the sheer impact of the moves, the impact noise going through you like a bullet so sharp were the contacts, in the end the man who had waited so long to cash in his money in the bank Mr Angelus emerged victorious to set up I assume a Max Angelus vs T Bone bout at a future event, that is something I want to see!!! 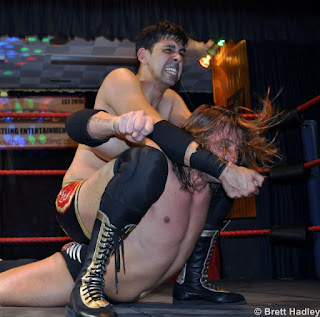 Throughout this show which was a new venue for SWE, the atmosphere was febrile, the whole event felt wild, the crowd involvement was excellent, the in ring wrestling was of the highest quality and the promo's cut as well really went to the core, I shall be back the next time they visit Letchworth the venue delivers and so do the promotion!