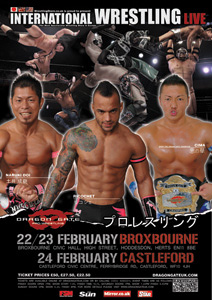 Since 2009 the best shows held in England have featured the names Shingo Takagi, CIMA, Susumu Yokosuka (now known as Jimmy Susumu), BxB Hulk and Naruki Doi. The trilogy of matches between Shingo and Yokosuka that featured in all three previous DG UK tours produced THE best match I have ever seen live - If not at all - As Shingo got the final victory in a epic and fitting conclusion. No annual DG UK tour was keenly felt in 2012 as A-Merchandise took a step away from putting on live events that year so that when Dragon Gate return to these shores, anticipation is at an all time high, perhaps even more so than before that initial Dragon Gate UK show held in November 2009. Their return is only one day away and I for one could not be any more excited to be at Broxbourne Civic Hall Friday and Saturday nights the 22nd and 23rd of February and then Sunday at Castleford.

On the first UK show The Lion Kid made his debut in the dark match and Marty Scurll and Mark Haskins both appeared on the main card. All three have retained their positions on subsequent tours and now they are seen on equal footing to the Dragon Gate roster members. Mark Haskins spent almost a year going back and forth between Japan and England before being signed to TNA, Lion Kid spent three months in the DG dojo and Scurll is fresh off appearing on TNA's British Bootcamp. Added to the UK main show roster this year is 19 year old Scottish stand out Noam Dar who made his first DG UK showing in a win in the Nottingham 2011 dark match and a wrestler who is tipped for great things, both at home and internationally.

Along with the five Dragon Gate staples on all previous DG UK shows mentioned earlier, Masaaki Mochizuki, YAMATO and Akira Tozawa all make their DG UK returns and American stand out Ricochet makes his DG UK debut. Also scheduled for the show was the generic luchadore El Generico but his WWE signing unfortunately scrapped that idea so instead Genki Horiguchi (now known as Genki Horiguchi H.A.Gee.Mee!!) returns to DG UK after appearing in the very first official DG UK match as a very suitable last minute replacement. In the dark matches Martin Kirby, Stixx, Johnny Storm and Dean Allmark all make returns to DG UK.

A lot has changed since the last time Dragon Gate visited these shores. The Blood Warriors vs Junction III feud has ended so CIMA and Naruki Doi return to my favorable roles in front of the fans. BxB Hulk and Akira Tozawa remain as hated in Mad Blankey as they did the last time they were in England. Mark Haskins may no longer be signed to TNA but has been on a mission to show what TNA is missing in that time, and the same can be said for Marty Scurll who missed out on winning TNA's British Bootcamp.

The main event of the first night is a first time ever filmed singles match between Shingo Takagi and Ricochet in what will be his European debut. At the last Broxbourne show we witnessed Shingo defeat PAC in a power vs speed battle in the main event and I have no doubt that Shingo/Ricochet can match that contest. In a rematch of last years King Of Gate's final Akira Tozawa faces Genki Horiguchi H.A.Gee.Mee!!. Genki came out the victor in that match but both could not take the Dream Gate Title away from CIMA's waist. Speaking of the man himself CIMA faces BxB Hulk, Mark Haskins and Marty Scurll in a four-way in which the stakes couldn't be higher for Scurll as losing this match ends his DG UK career. The UK guys Lion Kid and Noam Dar both face challenges from Naruki Doi and Jimmy Susumu in singles matches, but whereas Dar's match begins his Trial Series to earn his spot on the DG UK roster things couldn't be more personal for Lion Kid and Doi as last time in Broxbourne Doi tried to remove Kid's mask when he was part of the villanous Blood Warriors. But the match I am most looking forward too, out of perhaps all the matches this weekend is Masaaki Mochizuki vs YAMATO. These two have incredible chemistry in the ring against each other and their three matches in 2010 and 2011, two being for the Open The Dream Gate Title, are three of the best hard-hitting wars you will see in any promotion let alone just Dragon Gate.

Saturday Night is highlighted by Shingo again in the main event as this time he faces Akira Tozawa. Both men debuted in Dragon Gate after the Toryumon split so this is the first time two DG roster members face each other in England who weren't part of the Toryumon generation, and it's the main event of the night. They can't be considered generation rivals as a few years separate their debuts, but since Tozawa returned to Japan in June 2011 he's found himself across the ring from Shingo on many occasions in singles, tags, trios and assorted other matches, but this is the first time they'll face each other in a non-stipulation main event. If any match could beat Mochizuki/YAMATO as MOTW then it's this one. In the semi-main, providing he wins the night before, Scurll faces the biggest challenge of his life as he faces current Open The Dream Gate Champion, CIMA in a singles contest. These two traded pins over each other on the last tour so the result could go either way, Scurll will be fresh off survival but another loss puts him in the same position the next night whereas CIMA needs to show dominance as Dragon Gate's Champion. Two rare singles matches between Jimmy Susumu against YAMATO and Ricochet vs Horiguchi also feature, the last time to my knowledge Susumu faced YAMATO was in America in March 2010 for YAMATO's OTDG Title, and I have no prior knowledge of Horiguchi and Ricochet ever facing each other in a singles match before. In another four-way Haskins and Hulk again feature but this time Lion Kid and Doi bring their issue from the night before into the fray. And in the opening match, Noam Dar prepares for the beating of a life time as he faces Masaaki Mochizuki in what should be an incredible opener.

Closing the weekend out UK rivals Shingo and Susumu will reunite their Junction III team from 2011 and face *the* team in not only Dragon Gate but Dragon Gate USA as well, The Spiked Mohicans, CIMA and Ricochet former Open The Twin Gate and Open The United Gate Champions. This is a rare opportunity to see both teams reunite and as the only tag match of the weekend expect to see the fast paced hard hitting action seen in Dragon Gate's tag matches. In more rare singles matches Naruki Doi faces Masaaki Mochizuki, the last time these two faced off in Japan was during the King Of Gate 08 finals in which Doi's win propelled him to defeat Shingo Takagi and begin the longest reign of any Open The Dream Gate Champion to date. And Horiguchi faces BxB Hulk, again I can't remember a high-profile singles match between the two taking place. Lion Kid and Noam Dar end the weekend the same way they started on Friday by facing the best in Dragon Gate as they will face Tozawa and YAMATO respectively. And Castleford will begin the main show by featuring what may be the last DG UK match of Marty Scurll if he loses to CIMA the night before as he will face Mark Haskins, the history between these two teams in The LDR's vs The Thrillers feud being well known so a win will be highly sought after by both men, regardless of the cost.

I've been fortunate to attend every single Dragon Gate UK show to date and this weekend's line up's and the talent on the shows means that this may end up being the best DG UK weekend to date. We can only hope we don't have to wait over 15 months for the next set of shows as I guarantee you that every single person in attendance and those who buy the DVD's after the fact will be desperate to see Dragon Gate return to these shores once again.
Posted by WrestleFigsUK at 18:34