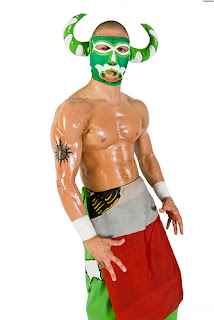 1. Welcome Ligero, tell the readers when did you break into the business?

I started training in January 2001 in a school in Sheffield that my cousin and I had seen advertised in WOW Magazine. I'd wanted to be a wrestler since the age of 8, and it was really lucky that I was able to find a school only an hour away from me. The school was an affiliate of NWA Hammerlock, and was ran by a guy called Alan Johnson, with the occasional appearance from Johnny Moss.

2. Any standout thoughts from your training?

Haha, yeah, I was awful! I was very much into my ECW when I started training, so I was a big fan of big moves and daft stunts etc, and I never had any real grasp of psychology etc. But to be fair, at the school, we weren't ever sat down and given the insight of how a match is constructed etc. The school was very technical based, which in hindsight, I do wish I had paid more attention to. I could do a backflip, but wasn't too interested in learning counters and holds, which is a very ignorant way to be. It took a long time, and a lot of guidance to finally pick up a solid grasp of psychology.

3. Over the years you've been involved in some great feuds, one I witnessed some years back was with RJ Singh which included him cutting off one of the horns from your mask, memories of that angle and feud?

It lasted forever and never ended! I've actually recently just watched back the FWA DVDs from their return in 2009, so I've just had chance to relive the angle. I enjoyed it, I honestly did. Singh is someone I've always liked working with, and there were some really decent moments in the feud, it's just a shame the FWA went the way it did, and the feud ended up losing a lot of momentum, and was watered down before it could be finished, with the seemingly random inclusion of Nathan Cruz. Cruz is a fantastic talent, but it just went from an intense blood feud to 'oh, just do some triple threat matches'.
The horn cutting angle was memorable though, and got a couple of photos in national newspapers and magazines! 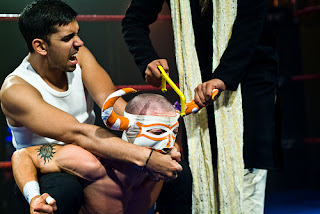 4. You've wrestled all over the UK and Europe, ever any talk of you working in the US?

I actually wrestled in the US in September 2004 for NWA Wildside, and another company called BWA. I wrestled in strip clubs and car parks in Atlanta. It was bizarre. But, as far as other places go, I've talked to the likes of PWG, ROH, CZW etc, it just comes down to the money.

5. Staying with the US, what's your opinion of wrestlers from the UK who fly themselves over there to work for indy companies, there have been some notable British workers who shall we say have shown their disdain for this, where do you stand on the subject?

Haha, I thought we'd be getting to this. That's kind of what I mean by it coming down to money. Companies like ROH, CHIKARA etc have shown interest, but I guess I'm of the opinion that if a company wants you enough for a couple of shows, they'll pay for you. British companies do it with imports, so why not the other way around? Am I a big enough 'name' to get flown out to those countries or is my work good enough? In the eyes of those promotions, not right now. But then it's up to me to get to that stage, not to rush it by flying myself out.

Look at someone like Kay Lee Ray, who went to Japan for a month and had her flights, accommodation etc paid for by the company, and was paid properly for all her matches. That's the right way to do it, and it goes to show it is possible still. I understand completely that it's a different ball game in some ways these days, and people are entitled to do as they wish. But I'm not big on the idea of paying to go and work 2 or 3 shows abroad just so I can say I have.

But that's just my opinion, and who am I? Everyone has different viewpoints, and everyone is entitled to one.

6. Another subject that has had some attention recently is the use of imports in British wrestling. You yourself have wrestled quite a few but the the detractors say they are taking a spot off a British guy, my views are well-known on the subject, what are yours?

My views are this: if you bring over two imports and put them on with each other, what's the point? Unless its an ultra special occasion and you're using it for your draw I mean. But, if you bring over imports and put them on with homegrown talent, and it gives them a big experience, a chance to learn and potentially open doors elsewhere, it's great for all involved.

7. On a lighter note, 2 years in a row now you've been number 1 in the UKFF top 50 British wrestlers list, do you take much stock in this and how have the boys reacted each time the list comes out?

It's nice, don't get me wrong. Both times have come as a big surprise, as I rate so many people in this country above myself that it's ridiculous! I think I bring something to the table, but I'd never tell someone 'oh, I'm the best in the UK', especially just because a couple of online polls say so. It's a really nice acknowledgement from fans who use those forums, but there are some who are so talented, but don't get the acknowledgment they should (Robbie Dynamite, Rampage Brown, James Mason etc), so it's not definitive by any stretch. Some people congratulate me, some people make very funny YouTube videos about it haha.

8. You are currently the PROGRESS champion, this promotion is just 5 shows old but has a tremendous following, you've been there since day one, thoughts on what Jim, Jon & Glen and the wrestlers bring the fans at every show?

The atmospheres at those shows are just fantastic. The crowd, which sells out before the doors even open, come to the events to have a great time, and not just to 'get themselves over'. The company is easily one of my favourites to work for at the moment, and it's cool how they've done something different to everywhere else with me.

We get treated so well by management there, and the atmosphere is great that everybody goes out and works their arse off.

9. You'll be facing US indy star Ricochet at PROGRESS chapter 6 on March 31st which should be a great match, what I want to know is, you have wrestled some big international stars and you are booked to in the future but is there anyone you haven't faced yet or book to so far you would like to face from abroad or the UK?

I wrestled Davey Richards back in January 2007, and I've always wanted a chance to wrestle him again. Other than that, I'd like to wrestle Adam Cole, as he seems to be someone who is on fire at the moment, as well as a couple of the Dragon Gate guys.

10. In closing, as an established worker on the British scene, who do you see coming up who you think has a bright future?

I always seem to answer this with Nathan Cruz, but I think that everyone is aware of him now. Noam Dar is obviously someone on everyone's lips at the moment too.

But as far as up and comers, Mark Andrews is a great young talent who could do good things. Davey Blaze up across the border has a hell of a look to him. There's a young man who I train called Sam Wilder who has so much potential for someone so new to the game. There's some great young talent out there.

Thanks for your time today sir, the floor is yours to plug any twitter/facebook accounts or anything else.