Shanna vs. Emi Sakura: What An Awesome Match By Aiden O'Brien

(All Photo Credits To AWW) 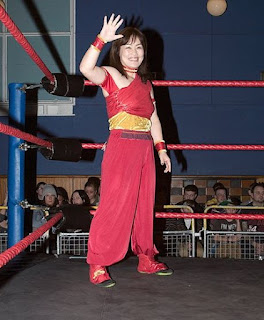 It was my fourth wrestling show of the weekend and by this point I was already feeling tired and worn out by the time I got to Wolverhampton for AWW. I only went to the show to see Mark Andrews for the very first time against former WWE superstar Brian Kendrick in the main event, but the undercard had other matches that caught my eye such as Kris Travis vs Kid Fite, T-Bone vs Robbie Dynamite and Kay Lee Ray vs Shanna. Ultimately the first half of the show left me feeling very uninspired and while there was nothing out-right bad (moments in the six man tag featuring wrestlers I've never seen before aside) there was just nothing that stood out or was particularly memorable. They had a packed crowd in Wolverhampton, a lot more people than I was expecting to see in all honesty, and it was very family friendly with young children lining up in front of the first row to stand up against the barrier. The second half of the show was a lot better and there was one match that caught the attention of almost every single person in the building as it got a very well deserved standing ovation by the end of the match. But it wasn't the main event I'd traveled and paid to see. In fact it wasn't even a match originally scheduled to take place.

On the second match after the interval Shanna defeated Emi Sakura in one of my favourite matches of the weekend and perhaps the best women's wrestling match that took place that weekend. And the second out of the four shows I went to that weekend was an all-women's wrestling show from Pro Wrestling EVE. I'd heard rumours before the show started that Kay Lee Ray had been injured the night before and would be replaced by Emi Sakura who had only left her native Japan to wrestle in England this weekend in order to defend the EVE Championship in a losing effort to Nikki Storm the day before. I'll be honest that when I thought of a potential Shanna vs Sakura match I didn't think much to it. Sakura is an incredible women's wrestler, perhaps one of the best in the world today, and she proved that with her epic Title match against Storm the day before. But while I'd seen Shanna before and she looked absolutely fine in the few previous times I'd seen her, I didn't know she was capable of having a match of this quality. But this match blew my mind.

To begin Shanna first came out and took the microphone to show why she is Portugal's Perfect Athelete by speaking Portuguese and then insult the crowd for not having the intelligence to learn a second language. She announced officially to the crowd that Kay Lee Ray was not there, so she should simply be declared the winner. This prompted Pro Wrestling EVE promoter to come out and state that Shanna did have an opponent this evening, that Britain has had an undeniable influence on wrestling, name-checking Daniel Bryan who spent many years traveling to England to learn his craft - And that got a YES! chant from the crowd - And stated that influence was keenly felt in Japan so introduced Emi Sakura as one of the best women's wrestlers alive in the world today as her opponent. It wasn't the best promo in the world but at least it did it's job to help put over Emi Sakura to the crowd and make her seem like a big deal to people who would have no idea who she was. 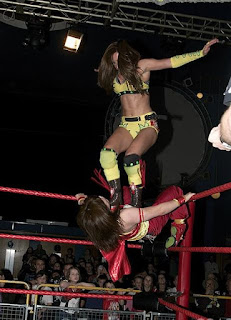 This was a different kind of match to Sakura vs Storm the night before. Whereas that was a Title match and therefore had to be seen as a little bit more "epic" in scale, Shanna and Sakura only needed 10 minutes or so to get the match over perfectly. This wasn't a main event Title, it felt more like a proving ground match for Shanna to be able to show her stuff and show that she belonged in the same ring as someone considered one of the best wrestler's in the world. And she more than showed it as on this night she was definitely on the same level as a wrestler the like of Emi Sakura. The crowd by this point may have been expecting something they would ordinarily see on TV and at the time I was thinking that this match would not work in front of this family friendly crowd that was conditioned to expect Eve vs Kelly Kelly in 5 minute matches. But I was wrong. So very, very wrong and I couldn't have been happier.

They started by battling for control over such a simple move as a wrist lock, Shanna really wrenching and pulling away at the arm, but Sakura was able to show off that British catch-as-catch style is escaping. Sakura took control of both of Shanna's hands to bring them down to the mat and stamp on them, the same thing she did against both Storm and April Davids the night before. Again with a staple move from her offense Sakura took hold of Shanna's hair and threw her across the ring, before following that up with a dropkick. Much like the night before Sakura hit some of the stiffest chops not to man, but that only served to fire Shanna up with a flying clothesline. Sakura was able to retort with some mongolian chops but Shanna grabbed hold of her hair and returned the favour from earlier as she used her body weight to throw them both down into the canvas, Sakura's face taking the brunt. 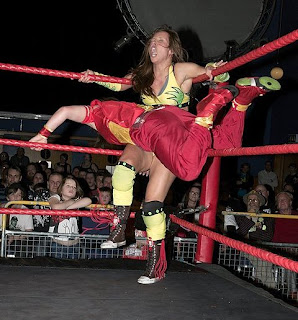 I remember Sakura hit a dragon sleeper swinging neckbreaker and by this point the crowd's pre-conceptions were being changed. Sakura then put Shanna into a rolling mexican surfboard and really wrenched Shanna's back as she pulled her down by her chin, in a little move that I absolutely adored began slapping her face dismissively before releasing and throwing her back down onto the canvas. Emi continued with more dismissive tactics as she simply kicked away at Shanna's head as she attempted to regain her footing, something which only served to rile Shanna up as when Sakura turned her back for that split-second Shanna was able to gain her footing and began to elbow Sakura in the face. In another little moment after Shanna had spent the entire match having "Not so perfect" chanted at her by the audience, when she was able to hit a picture-perfect dropkick she screamed out "PERFECT!" defiantly to the audience.

By this point you could tell the crowd was really beginning to enjoy this and when Sakura effortlessly maneuvered Shanna into an octopus hold there was an audible gasp of appreciation. The night before Sakura had delivered a series of double underhook backbreakers and tonight was no different, the second one with a long delay as she held Shanna up in the air before delivering the knee into the back was a great sight. Sakura hit a running cross body into Shanna in the turnbuckle but when she went for her corner body splash from the second turnbuckle, Shanna got a foot up under her jaw. After that Shanna attempted to take to the air from the top rope but Sakura cut her off, climbing up the turnbuckles herself but both women fought tooth and nail and Sakura found herself hanging from the turnbuckles with both legs trapped looking up at Shanna going down on her full force with a nasty looking double footstomp. By now the crowd was captivated.

Within seconds of the move you could see Sakura bleeding from the mouth but she was able to kick out of Shanna's Perfectplex. Shanna showed some great facial work as she was in disbelief that Sakura kicked out. This momentary pause allowed Sakura to fight back with hard slaps to the face but Shanna cut her off with a roaring elbow. Shanna then took to the top to again go for the move she was looking for earlier and hit her perfect press and by this point I was thinking Shanna had done it, she was going to beat Sakura in the biggest upset of the weekend and if it wasn't revealed that the ref had almost *accidentally* counted three I would have bought that being the finish and Shanna a very worthy winner. With everything exhausted, a desperate Shanna was quickly dumped on the back of her head with a tiger driver, but not even that could keep her down! In the end it took the biggest move in Emi's arsenal, a breath-taking 450 splash from the top rope to put Shanna down for the three count. 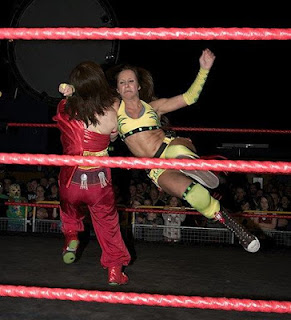 I can't remember where in the match the "This is awesome" chants started, but after that finish you saw several people raise to their feet in a standing ovation and I was one of them as a much louder "That was awesome" chant echoed around the Wulfrun Hall. I'm not one to chant that. I feel there are too many matches where people chant that *just* to chant it. But this match more than deserved the chant and the justified standing ovation. I really can't wait to see where the publicity from this match takes Shanna in the future as she gave a performance of a lifetime. I went into this match not expecting anything more than a good match. What I witnessed was far and away the best match of the night and the best women's match of the weekend. I know it would be hard to compare Sakura/Storm and Sakura/Shanna but while you knew to expect something epic out of the former, the latter blew away all pre-conceived notions and in the end turned round a 300+ strong family friendly crowd. How many women's matches in this day and age can say that?
Posted by WrestleFigsUK at 05:53